A great narration of a true classic…

When Captain Hastings comes back on a trip to London from his new home in the Argentine, he hastens round to visit his old friend, Hercule Poirot. After they’ve done a bit of catching up, Poirot shows Hastings a bizarre letter he has received, warning that a crime will be committed on a certain date in Andover. When the day comes, so does news of a murder – Alice Ascher, the owner of a small newsagents, has been found dead, with a copy of the ABC railway guide lying beside her body. Poirot and Hastings head to Andover, and soon find that Mrs Ascher’s drunken husband had every reason to want her dead, and would surely be arrested for the crime were it not for the strange coincidence of the letter. Some weeks pass before Poirot receives a second letter, this time warning of a murder to take place in Bexhill and, sure enough, a body turns up on the due date, along with another copy of the ABC. Poirot is already suspicious that this murderer is working to an alphabetical plan; a suspicion that is confirmed when the third letter speaks of Churston…

This is a rather typical Agatha Christie story – typically brilliant, that is. It has everything that makes her books such a joy: intriguing clues, plenty of suspects all with strong motives, lots of red herrings and misdirection, and, of course, the hugely entertaining interplay between Poirot and Hastings. It is narrated by Hastings, partly in the first person for the sections where he was present himself, and the rest in the third person, which he tells us he reconstructed from accounts from Poirot and other people.

There are possible suspects for each of the crimes – relatives, lovers and so on – but Poirot must find the link that connects them all. Chief Inspector Japp is always happy to have help from his little Belgian friend, and some of the suspects get together to offer their assistance too, so that they can have justice for the dead and also get out from under the cloud of suspicion that is hovering over them.

People sometimes sneer at Christie for working to a “formula” but I say, if a formula works so well, then why not? There are some things in this one that I feel are standard Christie, and they add as much to the enjoyment here as they do in so many of her other books. Her victims are carefully chosen so that we hope for justice for them, while not having to go through too much of the angst of grief. Poirot and Hastings spend much of their time interviewing people until Poirot’s little grey cells give him the solution, which he then reveals at a get-together of all the suspects. The tone is lightened by the warmth of Hastings’ narration – his occasional humour at Poirot’s expense never hiding the warm regard he feels for his friend. And although Poirot is obviously more intelligent than Inspector Japp, the police are never shown as bumbling incompetents. There is a general respect in the books that makes Christie’s world a pleasure to visit, and despite the similarities in tone and structure, the plots are different and original enough to make each book feel unique.

The plot of this one is beautifully complex and elegantly simple at the same time – a true Christie trait – so that when the solution finally comes, it seems both fiendishly clever and satisfyingly obvious. This is a major part of Christie’s success, I think – her “twists” are an untangling of a complicated knot, rather than the sudden introduction of some new layer of hitherto unsuspected silliness, as with so much contemporary crime. Her denouements don’t so much make one gasp with stunned disbelief as nod with satisfaction at the logical working out, and grin with pleasure at her cleverness in first hiding and then revealing her clues.

I listened to the Audible version of this, narrated by Hugh Fraser, whom Christie fans will recognise as the actor who played Hastings to David Suchet’s Poirot in the long-running ITV series. Fraser does a marvellous job – he captures the tone of the books perfectly, bringing out the humour and the warmth of the friendship between Poirot and Hastings. He has a lovely speaking voice and, though he doesn’t “act” all the parts, he differentiates enough between the characters so that it’s easy to follow who’s speaking. Obviously, when he’s reading Hastings’ dialogue, he sounds just like Hastings. But remarkably, when Poirot is speaking, he sounds just like Suchet’s Poirot! I guess Fraser must have spent long enough listening to Suchet do it that he has mastered a faultless impersonation. It gives the narration a wonderful familiarity for fans of the TV adaptations. 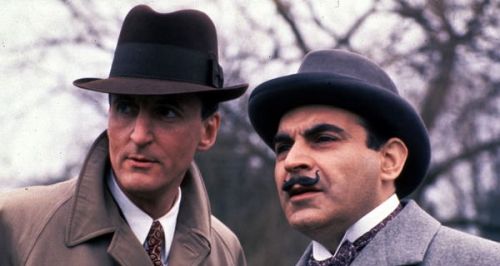 So to conclude, one of Christie’s finest, enhanced by a fabulous narration – I promptly shot off back to Audible and used up all my spare credits on getting as many of Fraser’s Poirot readings as I could, and happily he has done loads of them. My highest recommendation for both book and reading – perfect entertainment!

PS One thing that really bugs me is that the cover, which I otherwise love, has bullet holes on the letters. No-one gets shot in this story. FF’s Seventh Law: Cover artists should read the book before designing the cover.

I fear the TBR has reached its highest ever level – up a horrendous 9 to 194! This is mainly because I added several books for my Reading the Russian Revolution Challenge though, plus I picked up a few books that were on my wishlist in Amazon’s various Kindle sales.

Tragically, I also noticed recently that the number of audiobooks I’ve acquired over the years and then not listened to has grown to alarming numbers, and they’re not included in the TBR at all… I haven’t done a final count of them yet, but, inspired by the fact that I just acquired a spiffy new set of bluetooth headphones, I will be making an effort to get back into the habit of listening more regularly. A lot of the audiobooks I’ve picked up are re-reads, acquired as much for the narrator as the book itself – for example, the Joan Hickson readings of the Miss Marple stories, and lots of Jonathan Cecil reading PG Wodehouse. Then I’ve also picked up the audio version of some books that I’ll be reading so that I can swap between versions – I’m currently listening to Our Mutual Friend as well as reading it, and I downloaded Simon Callow’s reading of Animal Farm to go along with the book.

So without further ado, here are a few that are rising to the top of the pile…

Courtesy of Amazon Vine. When I heard that our very own Cleo won a charity auction to have her name included as a cameo role in this book, I simply had to snap up a copy. And then to start reading it instead of all the books that I had already scheduled…

The Blurb says: 1939: Europe is on the brink of war. Lily Shepherd, a servant girl, boards an ocean liner for Australia. She is on her way to a new life, leaving behind the shadows in her past. For a humble girl, the passage proves magical – a band, cocktails, fancy dress balls. A time when she is beholden to no one. The exotic locations along the way – Naples, Cairo, Ceylon – allow her to see places she’d only ever dreamed of, and to make friends with people higher up the social scale who would ordinarily never give her the time of day. She even allows herself to hope that a man who she couldn’t possibly have a future with outside the cocoon of the ship might return her feelings.

But Lily soon realises that her new-found friends are also escaping secrets in their past. As the ship’s glamour fades, the stage is set for something awful to happen. By the time the ship docks, two of Lily’s fellow passengers are dead, war has been declared and Lily’s life will be irrevocably changed.

Courtesy of Black & White Publishing. I thoroughly enjoyed Victoria Blake’s true crime book, Mrs Maybrick, so am keen to try her fiction. Her new book will be published later this month…

The Blurb says:  It is 1576 and Venice is in chaos, ravaged by disease and overrun by crime.In the midst of the anarchy we find those brave souls who have chosen not to flee the city. Titian, most celebrated of Venetian painters, his health failing badly; Sabastiano, a gondolier who is the eyes and ears of the corrupted and crumbling city and Tullia, the most famous courtesan of the age who must fight to retain her status as well as her worldly possessions. And in the present day the echoes of what happened centuries earlier still ripple as the lives of ordinary people as far distant as London and New York are touched by the legacy of old Venice…

Amidst my Audible backlog are several of Agatha Christie’s Poirot novels narrated by the lovely Hugh Fraser, better known to Christie fans, perhaps, as Captain Hastings. I’ve already started this one and he’s doing a great job…

The Blurb says: There’s a serial killer on the loose, bent on working his way through the alphabet. And as a macabre calling card he leaves beside each victim’s corpse the ABC Railway Guide open at the name of the town where the murder has taken place. Having begun with Andover, Bexhill and then Churston, there seems little chance of the murderer being caught – until he makes the crucial and vain mistake of challenging Hercule Poirot to frustrate his plans.

Courtesy of Audible. Every month I am offered some Audible releases to review and have been refusing them for ages, but of course now I know I have a huge backlog I can’t resist adding to it. I’ve only read one Dennis Lehane before but loved it, so this one appeals. It’s being re-launched by Audible to tie in with the movie release this month…

The Blurb says: Joe Coughlin is 19 when he meets Emma Gould. A small-time thief in 1920s Boston, he is told to cuff her while his accomplices raid the casino she works for. But Joe falls in love with Emma – and his life changes forever.

That meeting is the beginning of Joe’s journey to becoming one of the nation’s most feared and respected gangsters. It is a journey beset by violence, double-crossing, drama, and pain. And it is a journey into the soul of prohibition-era America….

A powerful, deeply moving novel, Live by Night is a tour-de-force by Dennis Lehane, writer on The Wire and author of modern classics such as Shutter Island, Gone, Baby, Gone and The Given Day.