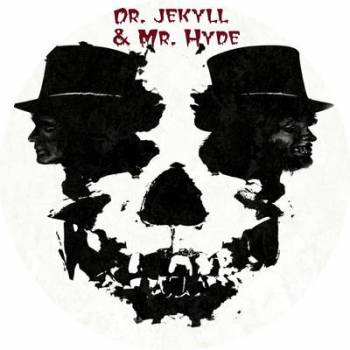 (I’m linking this post to the Movie Scientists Blogathon being held jointly by Christina Wehner and Silver Screenings. Follow the link to find your way to lots of great reviews of scientists in films – The Good, The Mad, The Lonely. I’m slotting Dr Jekyll into the Mad category…)

A man and a child accidentally bump into each other at a street corner – a normal everyday incident. But when the child falls down, the man deliberately tramples over her, ignoring her screams of pain. When he is stopped by passers-by, he shows no remorse. This is the reader’s first introduction to Mr Hyde, a man who has no obvious deformity but gives off an air so repellent that strangers passing him in the street shudder without knowing why. But this man has some kind of hold over the eminently respectable and well-known scientist, Dr Jekyll, who not only pays compensation for Hyde’s actions, but also gives him the run of his own house, and has made out his will in Hyde’s favour, leaving him everything should Jekyll die… or disappear.

In my review of the book, I mentioned a few things that made the story work so well, and even as I did, I could see that some of them wouldn’t work at all well on film. So I anticipated that the basic story would be changed, and decided that I would be looking to see how well the films stuck to the spirit rather than the actual plot.

London fog is a major character in the book, beautifully described and working both to give a scary atmosphere and as a metaphor for the darkness hidden within each human soul. I was disappointed to see that neither film made real use of this. Each shows the fog at one point and March makes a mention of it in the 1932 version, but it doesn’t ever get used to obscure acts of wickedness or to show London as a place where viciousness lives side by side with respectability. Interestingly, when I read London Fog recently, Corton mentioned that the fog created for use in films used to make cast and crew feel ill, so I guess directors probably chose to use it sparingly. But I missed it.

In fact, neither film gave a particularly atmospheric picture of London at all. I suspect they were both made mainly in the studio, and anachronisms abound – in dress, speech, manners. The sets are kept limited, for cost reasons presumably, so there is little prowling around dark alleyways. The Tracy film does better here, showing some contrast between the ultra respectable areas and the seamier side of life. But overall the films both rely more on dialogue and acting than on creating visual atmosphere.

The book gives very little indication of what Mr Hyde’s vices actually consist of and this works perfectly in written form, leaving the reader to her/his own imagination. Clearly it would never work in a film though. The 1941 film is obviously based on the 1932 version, so both have gone for the same addition to the story line – the introduction of two beautiful women, one the fiancée of Dr Jekyll, the other a prostitute (1932) or good-time girl (1941) who becomes Hyde’s unwilling mistress and major victim. In both cases this works brilliantly as a way to show the contrast between his good and evil sides and his struggle once evil begins to take him over.

The 1932 film has two lovely actresses who both turn in strong performances – Rose Hobart as Muriel, the fiancée, and Miriam Hopkins as Ivy the prostitute. Ivy’s transition from extremely saucy temptress to terrified victim is excellent, and though the physical violence mostly happens off-screen, the psychological torture Hyde uses on her is chillingly horrific.

The 1942 film has Lana Turner as fiancée Bea, and Ingrid Bergman as Ivy. Now, I shall admit bias here – I have adored Ingrid Bergman my entire life. In fact, as a child I wanted to be her when I grew up. She is stunningly gorgeous and a great actress, especially in these vulnerable, woman as victim roles. Her portrayal of flirty, tempting Ivy at the beginning is charming and her terror once Hyde has her under his brutal control is superb. So… I was prepared to overlook her extremely dodgy attempt at a kind of Cockney accent! At least she made an attempt, which is more than could really be said for either Lana or Spencer, who both sound cheerfully American throughout.

As far as the women go, acting honours come out about even – fine performances all round – with the 1932 edging it in terms of authenticity of accent, but Bergman’s performance just outshining Hopkins’ for me.

The men, Fredric March and Spencer Tracy, are just about equally good in my opinion – again I have a huge soft spot for Spencer Tracy, but I could see why many people rate March’s performance as the better of the two. Which brings me neatly to the crux of the matter – it is in the character of Jekyll/Hyde that the two films finally diverge, making one an adaptation faithful to the spirit of the book, and the other a kind of schlock horror – excellent, but wrong.

The book makes it clear that Jekyll has always had vices but now finds it difficult to indulge them due to his increasing fame. So he is never a truly good man – he is a weak man, whose evil side comes to dominate him more and more. The March film gets this so wrong, portraying Jekyll as some kind of angel, caring for the poor and needy out of goodness of heart. Not so the Tracy version, which has Jekyll single-mindedly pursuing his objectives, carrying out experiments on animals, and people if he can get the chance, and not needing much temptation from Bergman to stray from the path of righteousness.

And again, the book says specifically that Hyde suffers from no obvious physical deformity – his evil is in his nature, not his physical being. The Tracy film is spot on – though his appearance changes, he remains a man – coarsened, perhaps, but not head-turningly grotesque. March turns into the ape-man! He does it brilliantly, but still – it’s ridiculous! By the end he’s leaping about up and down shelves like some kind of manic chimpanzee! His body language is that of an animal – all twitches and sniffs. Tracy is always a fully human man – much more chilling when he turns to evil and, more importantly, true to Stevenson’s creation.

So, both films are very enjoyable and I had huge fun immersing myself in the story again and again. But in terms of Film of the Book – the 1941 version wins hands down. Take a bow, Mr Fleming and Mr Tracy! Great adaptation!

And, finally… ooh, this is hard. Very hard!… 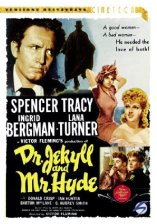 (Well, it cheated by having Ingrid Bergman and Spencer Tracy in it…)