The Characters in Costume Blogfest is being hosted jointly by Christina Wehner and Andrea at Into the Winter Lea, and seemed like a great opportunity to discuss one of my all-time favourite films, A Few Good Men (Dir: Rob Reiner, 1992).

The cynics amongst you are probably thinking this is simply an opportunity to post pics of the deliciously young Tom Cruise in his lovely white uniform. As if I’d ever be so shallow! 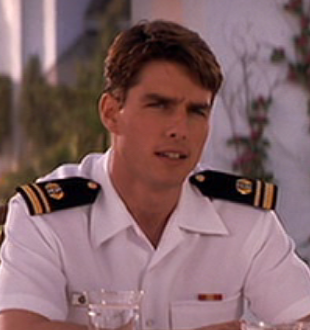 No, indeed! It has always seemed to me that the use of uniforms in the movie, both overtly as one of the major plot points, and more symbolically throughout, is as important in conveying the meaning of the film as are the spoken lines. Since this is a discussion of the film rather than a review, it will be heavily spoiler-filled, so if you haven’t watched it and want to, I’d suggest you do that before reading. But do come back afterwards!

(NB To get it out of the way straight off, I have no idea whether the uniforms in the film are authentic and accurate or not, and I frankly don’t care. As far as I’m concerned they are part of the storytelling, and if the director has taken some liberties with the truth or simply got things wrong, I’m fine with that.)

Briefly, the film tells the story of Lieutenant Daniel Kaffee (Tom Cruise), a member of the US Navy’s JAG Corps, defending two marines who have been charged with murdering one of their colleagues. The plot hinges on whether they had been ordered to give the victim, Private William Santiago, a Code Red – a traditional form of internal disciplinary punishment recently outlawed. This is used as a basis to discuss codes of honour, attitudes to discipline within the armed forces, and the age old question of whether it is ever acceptable for soldiers to disobey orders given by an officer.

The first indication of the importance of uniform within the film is its absence. Every serving character in the film makes their first appearance in uniform – except Kaffee, who first appears in baseball kit. Daniel Kaffee is a young, recently qualified lawyer, intending to serve a few years in the JAG Corps because he feels his late father, himself a celebrated lawyer, would have wanted him to. He has no real loyalty to the Navy nor any desire to do more than plea-bargain his way through the cases he’s allocated. While others are proud of their uniforms, Kaffee gets out of his into civvies at every opportunity.

One of the major themes is the divide in attitude between the officers in the JAG Corps, who are part of the navy, and the marines, who see themselves as the real fighting men. This divide is almost a matter of mutual contempt. The JAG officers see the marines as outdated relics of a more brutal past (remember, this is towards the end of the Cold War, when peace had been the norm for decades and everyone anticipated that we’d keep heading in that direction). The marines see the navy in general as an inferior branch of the service, and the JAG officers in particular as bleeding heart liberals with no code of honour and no understanding of the realities of facing an armed enemy. (At that time, the Soviets were still in Cuba and the marines at Guantanamo were the US’ first line of defence in the Cold War.)

Lieutenant Kaffee: Have I done something to offend you?
Lieutenant Kendrick (Kiefer Sutherland): No, I like all you Navy boys. Every time we go someplace to fight, you fellas always give us a ride.

When Kaffee and his colleagues JoAnne Galloway (Demi Moore) and Sam Weinberg (Kevin Pollak) go to Cuba to start their investigation, Sam advises Kaffee to wear his white uniform because of the heat. Unlike the two men, who are first and foremost lawyers, JoAnne’s loyalty is to the service – she sees herself as an officer first and a lawyer second. JoAnne wears khaki. On arrival in Cuba, the two men are immediately told to don camouflage…

Corporal Barnes (Noah Wyle): I got some camouflage jackets in the Jeep, sirs. I suggest you both put them on.
Kaffee: Camouflage jackets?
Barnes: Yes, sir! We’ll be riding pretty close to the fence line. If the Cubans see an officer wearing white, they figure it might be someone they want to take a shot at.

The white uniforms are shown even more clearly as symbolising everything the marines despise about these non-fighting officers when the commanding officer of the marines, Colonel Jessup (Jack Nicholson), demands that Kaffee show him the respect he feels is his due…

Colonel Jessup: You see, Danny, I can deal with the bullets and the bombs and the blood. I don’t want money and I don’t want medals. What I do want is for you to stand there in that faggotty white uniform and with your Harvard mouth extend me some fucking courtesy. You gotta ask me nicely.

Kaffee doesn’t fare much better with his clients. Disgusted that Kaffee wants them to take a deal, Lance Corporal Dawson (Wolfgang Bodison) tells him…

Lance Corporal Dawson: You’re such a coward. I can’t believe they let you wear a uniform.

The plot hinges on why Private Santiago didn’t pack on the day he died. He was apparently due to be transferred off base at dawn the following day for his own safety (having gone outwith the chain of command to report on a fellow marine), but Kaffee sees all his uniforms carefully hung up in his wardrobe. The realisation of the oddity of this comes to him when he later sees his own uniforms hung up in the same way. This leads to a courtroom scene where he demands to know from Colonel Jessup what clothes the Colonel packed when he came to Washington to testify. And it’s at this point that the trial begins to turn in Kaffee’s favour. So uniforms play an actual pivotal part in the story as well as being used symbolically.

Perhaps the most powerful use of uniform in the film, though, comes when Jessup’s second-in-command, Lieutenant Colonel Markinson (J. T. Walsh), is torn between loyalty and honour.

Lieutenant Colonel Markinson: I want you to know that I am proud neither of what I have done nor what I am doing.

As we hear his voice reading the last letter he wrote, to Santiago’s mother, we watch as he puts on his full dress uniform – the braided jacket, the belt, the shoes shiny as mirrors, the white gloves, the ceremonial sword, and finally his officer’s hat – then takes his service pistol and shoots himself in the mouth. It’s an incredibly powerful scene, showing how even at this extremity the uniform and all it symbolises is of ultimate importance to him. Finally, in the course of the case, Kaffee too has learned the meaning of duty and honour, and learned to admire these men who live by a code that he has come to understand a little better. And in return, he has changed the contempt of the marines he defended into respect. The young man we first met in his baseball gear is last seen in full dress uniform, receiving the salute of his client, and returning it with none of his earlier cynicism for the traditions of the marines.

A great film, in which I think the three major actors, Tom Cruise, Demi Moore and Jack Nicholson, each give one of their best performances. And, you know, it has to be said… Tom does look awfully handsome in uniform…

To read the other posts in the blogfest, pop on over to Christina’s blog for links. Thanks for hosting, Christina and Andrea!