Flesh and blood and bone… 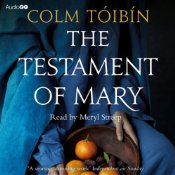 When it comes to dramatic interpretations of books, every reader is his/her own director. We know how the book sounded in our head, how the characters looked, behaved, spoke. How often do we feel a little disappointed in the ‘film of the book’ – not because it is in any way unfaithful to the story, but simply because it’s not quite as we envisaged it? The same problem of reader-as-director applies to audiobooks. Sometimes the narrator’s voice fits perfectly with the voice in our head – Derek Jacobi as Watson narrating Holmes, for instance, Joan Hickson reading Agatha Christie, or Jonathan Cecil as the perfect narrator of Jeeves and Wooster…for this reader/director anyway.

The Testament of Mary is the ideal book for audio, since it is the first-person narration of Mary’s story, and was originally written as a performance piece before being turned into a book. I have reviewed the book already (click to see the review) and found it a harrowing novel, full of guilt and fear. I was thrilled to hear that Meryl Streep had recorded it, given my admiration of her talent as an actor and my love of her voice. And I’d like to say straight off that hers is a wonderful performance, emotional, well-paced and with Mary’s character fully realised. But…but…the emotions that Streep has given us are primarily those of sorrow, loss and regret and while that is a perfectly valid reading of the book, it doesn’t quite chime with my own directorial interpretation. The anger and bitterness, the fear and guilt were all a little muted – subsumed by the sorrow. This is a book that made me cry for Mary, indeed, but it also made my blood boil, horrified me and made me feel Mary’s fear.

Up to the point of the Lazarus story, Streep had me totally with her. This was perhaps the part of the book that affected me most. The vision that Tóibín gives us of the strangeness and pain of Lazarus following his return to life churned my emotions, and Streep caught this aspect perfectly. But at the description of the crucifixion itself, I felt that the horror didn’t come through – this is a mother watching her son having nails driven through his hands and suffering a cruel and lingering death. Mary explains why she did nothing, but that doesn’t mean that she remained dispassionate, and I’m afraid Streep’s reading seemed strangely passionless for the most part, almost resigned.

Since the story is being told by an old Mary long after the event, I could see the validity of Streep’s reading – this is a story Mary has gone over in her head many times and the horror will no longer be fresh for her. But it is for us – and I felt there should have been more of an emotional peak. The narration didn’t move me to anything like the extent of my own internal reading of the book – I didn’t find I was sharing Mary’s emotions, I didn’t feel the pain and the guilt to the same degree, and the fear just didn’t seem to be there.

Overall, I may have felt quite differently about this reading had I never read the book, and I would certainly recommend it highly to anyone who prefers audio to print. It is one interpretation, certainly at least as valid as my own, and Streep’s performance is strong and beautifully controlled. But it didn’t match the expectations of my interior director and therefore didn’t have quite the impact I was anticipating. With luck, this may become the kind of book that many actors will want to tackle and we may get a range of audio interpretations in time. If so, though I personally will be hoping for a more overtly emotional performance, Streep has set a very high standard and I’m sure this version will remain one of the best.

‘Bone of my bones and flesh of my flesh…’

This short novella is an amazingly powerful account of a mother’s love and grief for her son. The fact that that son happens to be, perhaps, the Son of God is secondary. Beautifully written and with some wonderful, often poetic, imagery, Tóibín shows us Mary as a woman who lives each day with guilt and pain that she couldn’t stop the events that led her son to the cruel martyrdom of the cross.

As Jesus’ followers encourage her to embellish her story to tie in with the legend they are beginning to create, Mary feels that she must tell, even if only once, the true story of her involvement in these momentous events. We see her cynicism and doubt about the miracles attributed to her son; her dislike, contempt even, for those followers who seem intent on feeding his ego, who seem to be provoking his martyrdom to serve their own ends. And most of all we come to understand and almost to share her guilt and fear.

Emotional, thought-provoking, at points harrowing, this book packs more punch in its 104 pages than most full-length novels. Its very shortness emphasises Mary’s driven urgency to tell her tale before her chance is gone. Despite the subject matter, it will appeal to lovers of great writing of any faith or none – this story is first and foremost about humanity.  Highly recommended.

Since I first posted this review on Amazon US in October 2012, I have become very aware from other reviews that many Christians have found this book offensive, though being honest it seems often to be people who haven’t read it who find it so.  From my perspective, there is no denial of Christ being the Son of God in the book. Indeed, Tóibín tells the tale in such a way that there is no doubt that Christ performed miracles, though Mary may question their worth. The story of Lazarus is one of the most haunting parts of the book.

This is the story of an old and lonely woman, who has lost her son in the most horrific way, living with grief and pain and, not unnaturally, doubt as to whether it was worth it. The guilt Mary feels is the creation of her own mind – at no point did I feel that Tóibín was implying that her guilt was well-founded. How many mothers feel undeserved guilt when their children suffer? Why would Mary be different?

As I said in the original review, this is a very human story that moved me deeply and remains fresh and sharp in my mind six months later. I can only encourage people to read it with an open mind. If it is read as fiction, not fact, then it is a very beautiful piece of writing and a master-class in story-telling.