“No-one forgets the truth; they just get better at lying.”

Frank and April Wheeler have the perfect 1950s lifestyle – the nice house in suburbia, the two children; he with the daily commute to a good job in the city; she, a home-maker, beautiful and decorative – the middle-class, mid-20th century American Dream made real. But strip away the superficial and we find two people who have failed to be the people they expected to be, who are living every day with the disappointment of what they and each other have become. There is a desperation at the heart of this book – the desperation of rats caught in a laboratory maze.

Although Yates takes us into the minds of most of the characters at points, we mainly see the world through the eyes of Frank Wheeler. The book begins as April takes part in an amateur performance of The Petrified Forest – a play with the central theme of artistic and intellectual worth trapped in a loveless and humdrum existence, but where tragedy leads to escape. No coincidence that this should be the play that Yates chose, and no coincidence either that the performance should fail badly, leaving April publicly humiliated. Already in these early pages, Yates has signalled his major themes of intellectual elitism, entrapment and failure.

Long after the time had come for what the director called “really getting this thing off the ground; really making it happen,” it remained a static, shapeless, inhumanly heavy weight; time and again they read the promise of failure in each other’s eyes, in the apologetic nods and smiles of their parting and the spastic haste with which they broke for their cars and drove home to whatever older, less explicit promises of failure might wait for them there.

Frank once aspired to lead the life of an intellectual, perhaps to be a Hemingway, defying convention and rejecting the lifestyle of his parents. He was feted in his student days as one of the coming generation, a brilliant conversationalist who would (in some way that he never quite got around to pinning down) have an intellectual impact on the world. April – beautiful, cool, aloof – aspired to be a serious actress. Each attracted to the other’s projected image rather than to the underlying person, they seemed an ideal glittering match, until the reality of pregnancy forced them down the path of conventionality towards earning a living and making a home. 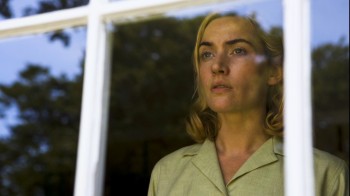 Now they are trapped – by their children, by society, but mostly by each other. As they fail to be what they anticipated they see their failure reflected back to them from the other’s eyes. It is only when April comes up with a radical plan to allow them to regain their lost glamour as free-wheeling intellectuals that Frank begins to realise he may no longer have the courage to pursue this dream – to risk discovering that he lacks the intellectual wherewithal, the belief in which has been the foundation of his sense of snobbish superiority over his neighbours and colleagues. When April reveals that she is once again pregnant, for Frank it is an excuse to retreat back to the safety of his conventional life. But to April it’s another trap – to keep her in a lifestyle she never wanted and to prevent Frank from becoming the man she thought she was marrying. For April, the coming child is her prison – for Frank, it is his escape.

Yates is brutal to his characters, shining a light so bright there’s nowhere for them to hide. And through them, shining a light on this ’50s society, perhaps the last generation where women were still so irrevocably defined by motherhood and the men they married; and perhaps the first generation where men were beginning to question the role of masculinity in an increasingly white-collar world. Frank’s ambivalence towards his father is based on a mixture of intellectual condescension together with an unacknowledged jealousy of his physical skills, embodied in the recurring image of his father’s powerful hands.

Post-war, we see a generation of ordinary men who had access to higher education, often as the first in their family to do so. Where for Gatsby the American Dream was about money, birth and beauty, Yates shows the ’50s as a time of two dreams in conflict – the security of middle-class suburbia and the excitement of intellectual escape – with his characters caught between them. And yet Yates also seems to suggest that neither dream is worthy of pursuit – that somewhere along the way the lofty aspirations of previous generations have narrowed and shrunk down to this.

The place [Paris] had filled him with a sense of wisdom hovering just out of reach, of unspeakable grace prepared and waiting just around the corner, but he’d walked himself weak down its endless blue streets and all the people who knew how to live had kept their tantalizing secret to themselves, and time after time he had ended up drunk and puking over the tailgate of the truck that bore him jolting back into the army.

The ’50s were a time of huge change – the beginning of the decade still reflecting pre-war values and conventions, and the end looking forward to the surge of youth culture, sexual freedom and social upheaval that typified the ’60s. Yates brings the period brilliantly to life in this shortish novel that nevertheless has space to look not just at the characters as individuals but also at the society and culture they inhabit. His depiction of Frank’s workplace as a soulless maze of pointless paper-shuffling is superb, reflecting the growing struggle, for men in particular, to find some sense of fulfilment and worth when there is no physical input and no visible end result. 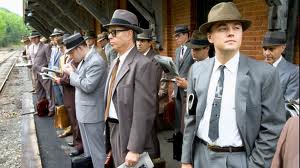 “Whaddya do then? Advertising man, or what?”
“ No, I work for Knox Business Machines.”
“Whaddya do there? You design the machines, or make them, or sell them, or repair them, or what?”
“Sort of help sell them, I guess. I don’t really have much to do with the machines themselves; I work in the office. Actually it’s sort of a stupid job. I mean there’s nothing – you know, interesting about it, or anything.”

Yates captures the language of the time so well that I could hear the dialogue being spoken in my head. These words could have been spoken at no other time and in no other place. And yet for all the talking in the book, there’s no sense of communication – each character is ultimately alone, desperately trying to hide behind the image they project. There are moments of quiet beauty in the writing, and an integrity in the characterisation that leads the reader to empathise even when we see them stripped down to their worst flaws and insecurities. And perhaps we empathise most because he makes us fear that we recognise ourselves in there somewhere. A masterpiece.

A brilliant depiction of the hiatus between the war and the 60s and of the middle-class trying to work out a new identity in the post-war world – achieved.

Subjective, but yes, I think so – the theme has been revisited since (and to some degree before – as Yates himself makes clear by referencing The Petrified Forest), but the setting, the climax and most of all the language within the dialogue make it innovative and original, so…achieved

Oh dear…I’m going to change this criterion when I do a GAN Quest update, since I really think it’s unachievable and unreasonable. But meantime, no…this is about a specific group within America – young, white, educated, middle-class, so can’t be said to capture the entire American Experience. I also feel that, dialogue aside, the themes in this novel are not completely specific to the US – Britain and most of Western Europe were struggling with very similar issues of identity and aspiration at much the same period.

So with great regret, not The Great American Novel, but for achieving 4 GAN flags, I hereby declare Revolutionary Road to be A Great American Novel. And another truly great novel – if all the ones on my list are as good as this, the quest will be a rare treat.

Agree or disagree, I’d love to hear your opinion…