One August morning in 1974, a man was spotted standing on top of one of the newly-built Twin Towers. A crowd quickly gathered, wondering if he was going to jump. Some prayed for his safety and begged him to come down, others egged him on to jump, in that ugly way crowds have. But in a moment of unforgettable magic, Philippe Petit stepped out onto an inch-thick wire, 1350 feet above the ground, and walked between the towers. For 45 minutes he held the city enthralled as he walked back and forth, sitting, even lying on the wire.

When something as momentous as 9/11 happens, how do you deal with it in fiction? To tell the story of the events themselves can feel maudlin, voyeuristic – a kind of cashing-in on tragedy. Colum McCann’s book only obliquely refers to that day, but the iconic status of the Twin Towers, their presence in the book, means it’s never far from the reader’s mind. And it’s no coincidence that the one picture McCann has chosen to illustrate the book, with the benefit of hindsight becomes terrifyingly prescient. 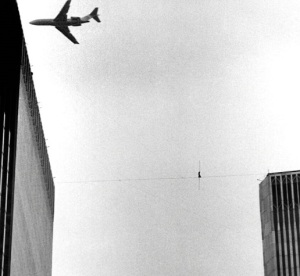 Instead, McCann chooses a different unique moment in the history of the Twin Towers, using it as a starting point to tell the stories of some of the people whose lives intersected while Petit walked. It’s not a celebration of New York, exactly – it’s too clear-sighted about the many problems that existed at a point when the city was drowning in drugs and crime, and the country was reeling from Vietnam. But it is a deeply affectionate picture, a warts and all portrait of its people struggling to achieve that point of balance, to make their own walk, to recognise the occasional moment of magic in their own lives.

One of those out-of-the-ordinary days that made sense of the slew of ordinary days. New York had a way of doing that. Every now and then the city shook its soul out. It assailed you with an image, or a day, or a crime, or a terror, or a beauty so difficult to wrap your mind around that you had to shake your head in disbelief.

In the end I loved the book, but it took a while for me to get there. Rather appropriately, it was almost exactly at the mid-point that I suddenly became invested in the lives McCann describes. I suspect this is one of those books that will actually work better on a re-read, because knowing how the stories play out will add the emotional content to the early chapters which I felt was a little lacking on a first read.

Although I grew to love it, I can’t in truth say the book is unflawed. Let me get my usual foul language rant out of the way first. Some of the chapters are little more than long streams of foul-mouthed, unimaginative swearing, either in dialogue or when he’s writing some characters’ narratives in first person. An author should do more than pick up speech traits – mimicry is not art. Being brutal about it, one can train a parrot to repeat speech. But in fiction, an author should be able to achieve a sense of authenticity without simply parroting the poor language skills of the people on whom he’s basing his characters.

It’s a pity because, when he ceases the mimicry and writes in his own creative voice, he writes quite beautifully. The sections where he describes Petit’s preparation and walk create such brilliant atmosphere that I felt all the terror and exhilaration as if I were there on top of the Tower with him. His characterisation is superb – these people gradually became real to me so that I cared what happened to them. And he avoids any emotional trickery or contrived coincidence, so that their stories feel as real as their personalities.

Within seconds he was pureness moving, and he could do anything he liked. He was inside and outside his body at the same time, indulging in what it meant to belong to the air, no future, no past, and this gave him the offhand vaunt to his walk. He was carrying his life from one side to the other. On the lookout for the moment when he wasn’t even aware of his breath.

The core reason for it all was beauty. Walking was a divine delight. Everything was rewritten when he was up in the air. New things were possible with the human form. It went beyond equilibrium.

He felt for a moment uncreated. Another kind of awake.

The other major flaw is that some of the sections don’t add anything and, in fact, serve only to break the flow and interrupt the development of an emotional bond between reader and characters. Some of the threads carry through the book, recurring and twining around each other, like an intricate dance. But a few of them are entirely separate – for example, the section about the boy who photographs graffiti on the underground, or the hackers who – well, I can’t really tell you what the hackers do, because it was so full of unnecessary techie jargon that almost the only words I understood were the incessant swear words, and I tired of them so thoroughly I skipped the bulk of that chapter in the end. I guess McCann was trying to cover everything he could think of that was relevant to New York or the time, but I felt the book would have been tighter and more effective if it had stayed more focused.

Despite all this, the major stories have a depth and fundamental truth to them that in the end lifts the book to within touching distance of greatness. Corr, the religious brother working amongst New York’s prostitutes and drug dealers, is caught between his vow of celibacy and his love for a woman. Tillie tells her own story of her life as a prostitute and her shame as she sees her beloved daughter Jazzlyn follow her onto the streets. Claire is mourning the son she lost in Vietnam and trying to find a kind of solace in the company of other bereaved mothers. Gloria, whose life would have broken many women, finding a way to survive by holding out a generous hand to those around her. Solomon, the judge who spends his days brokering deals and plea bargains, suddenly tasked to find an appropriate punishment for this man who has committed trespass to walk between the Towers, and in doing so has caused a whole city to raise its eyes. As they cross each other’s paths, McCann shows how single moments can change entire lives, and ripple out to touch the lives of others.

He has shaved. I want to tell him off for using my razor. His skin looks shiny and raw.

A week later – after the accident – I will come home and tap out his hairs at the side of my sink, arrange them in patterns, obsessively, over and over. I will count them out to reconstitute them. I will gather them against the side of the sink and try to create his portrait there.

McCann paints New York as a city that lived for the moment, instantly forgetting its own history – a place without the memorials and statues that fill other great capitals of the world. And he leaves the reader to realise how that all changed when the Twin Towers fell – their absence a memorial that will exist as long as anyone remembers seeing them soar above the city skyline, and will have a half-life in photos, newsreels, art and literature for long after that. But as his characters walk their own wires and the great world spins, ultimately he reminds us that some moments bring magic and wonder rather than tragedy, and hope exists even at the darkest times.

The world spins. We stumble on. It is enough.

Colum McCann is Irish by birth and nationality (so this review is also part of Reading Ireland Month) but has lived in the US for thirty years. I reckon he’s assimilated pretty well so… achieved.

Yes, it’s a great picture of New York in the ’70s, when the city was at its peak of crime and social decay, and also references the changes brought by 9/11 to the city’s psyche. Achieved.

Yes, using Petit’s walk and the ’70s to obliquely discuss 9/11 is an innovative and successful approach. So – achieved.

Despite his too frequent lapses into speech mimicry and foul language, and his occasional lack of focus, the majority of the book is indeed superbly written. So in the spirit of generosity inherent in the book, I’m going to say… achieved.

Sadly, while the book undoubtedly captures parts of the New York experience brilliantly, I don’t feel it is wide enough in scope to meet this criterion. So… not achieved.

So not The Great American Novel but, with 4½ stars and 4 GAN flags, I hereby declare this…