A study of evil…

Fernand Ravinel is a travelling salesman, often away from the home he shares with his wife, Mireille. This makes it easy for him to spend time with his lover, Lucienne. But, in time, the pair decide this isn’t enough – that Mireille has to be got rid of. And so they set out to murder her. Their plot at first looks like it’s going to be successful, but then a strange thing happens, and gradually everything starts to go wrong… and as it does so, Fernand’s mind begins to unravel.

This book comes with a request from the authors for readers to tell nothing about the plot so as not to spoil it for other readers, so I’ve restricted my little introduction to slightly less than is given in the publisher’s blurb. In essence, the book concentrates on Ravinel’s state of mind, showing how guilt and remorse soon knock him off his emotional balance, sending him on a spiral into delusion, depression and finally threatening even his sanity. But there’s also a mystery element that stops this being a simple character study – something strange is happening and, while Ravinel in his delusional state is willing to consider a supernatural element, the reader is left looking for a rational explanation.

Unsurprisingly in a man who is plotting to murder his wife, Ravinel is not a sympathetic character. He’s self-obsessed, rather cold emotionally, seeming unable to truly love either of the women in his life, and he’s something of a hypochondriac. But although this makes it pretty much impossible to empathise with him, it still leaves him as a fascinating subject for a character study. Boileau-Narcejac use his weaknesses and character flaws brilliantly to create a compelling picture of a man driven to the edge of insanity. They are the authors who wrote Vertigo on which the Hitchcock film is based, and there are some similarities between the books. Both blur the line between villain and victim, concentrating on the effects on the central character’s mind as he is drawn into a plot that spirals out of his control, and both veer close to mild horror novel territory as he gradually loses his grip on reality. And both are dark, indeed.

For me, this one isn’t quite as strong as Vertigo. Mainly, this is because the solution seems pretty obvious from fairly early on which takes away some of the suspense. It still leaves it an intriguing and enjoyable read though, partly because it’s so well written and partly because it’s less clear how the story will be allowed to play out. As strange events lead Ravinel to become more disturbed, there’s a truly chilling effect – it’s easy to understand why he is so badly affected by them. Both the Boileau-Narcejac books I’ve read have been fundamentally about evil, but they seem to see weakness of character as an integral part of that evil, so that the books are less about the incidents and more about the psychological impact they have on the perpetrator.

I trust I’ve been vague enough to suit the authors and if you’re now wondering what on earth this review is going on about, I can only suggest you read the book! It has also been made into a film more than once, but the consensus seems to favour the 1955 Clouzot version, Les Diaboliques, which I am now looking forward to watching…

From among the dead…

As Paris waits uneasily for war to begin, Roger Flavières is approached by an old college friend, Gévigne, who puts an odd proposition to him. Gévigne is concerned about his wife, Madeleine. She has been lapsing into odd silences, almost trances, and seems bewildered when she comes out of them. Gévigne knows she’s been going out during the afternoons but she says she hasn’t – either she is lying, which Gévigne doesn’t believe, or she has forgotten. Gévigne wants Flavières to follow her, partly to find out what she’s doing and partly to make sure she is safe. Flavières assumes she is having an affair, but eventually agrees to Gévigne’s request. But a few days later, Madeleine steps quietly into the river and Flavières has to rescue her – a meeting that leads to him developing a strange obsession for her, which he calls love.

This is, of course, the book on which the famous Hitchcock film is based, a film I have always admired more than enjoyed, partly because I’m not a huge fan of Kim Novak. The plot is very similar to the book, though Hitchcock has changed the emphasis to make more of the vertigo aspect. Apparently the book was originally called D’entre les morts (From Among the Dead), and this is a much more apt title. Flavières does suffer from vertigo and this was the cause of him being indirectly responsible for the death of his partner when he worked for the police, and also provides a crucial plot point later on in the book. But the focus of the book is much more on the breakdown of Flavières’ hold on reality as he comes to believe that Madeleine has the ability to return, like Eurydice, from the dead. 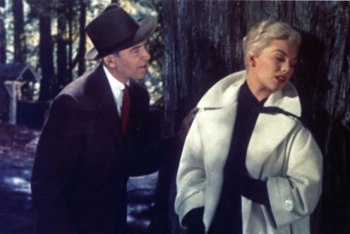 The book is set in wartime, with the first section taking place in Paris just as the war is beginning and the second part four years later in Marseilles as it is heading towards its end. This gives a feeling of disruption and displacement which is entirely missing from the film, set as it is in peacetime America. It is impossible for Flavières to track Madeleine’s past because records have been destroyed, and people are constantly on the move, both physically and socially, as black marketeers and weapons manufacturers grow wealthy and those who can leave the parts of France most affected by war. Flavières failed the medical for the army, for reasons left deliberately rather vague, and feels he is despised by strangers who see an apparently fit man avoiding service.

Another major difference is that in the book Flavières is a loner – or, at least, alone. He appears to have no friends and gets no fulfilment from his job as a lawyer. In the film, Scottie Ferguson (the Flavières character) has a devoted friend in Midge Wood, and is an all-round decent chap, although guilt-ridden. Flavières is not a decent chap! He is a weak man, pitiable almost, whose obsession with Madeleine seems like an extension of an already unstable mental state rather than the cause of it. As the book progresses, he steadily disintegrates, and his behaviour becomes ever more disturbing and crueller towards Madeleine for not admitting to being who he thinks she is.

The book is very well written, and well translated for the most part, although with an annoying tendency to leave some phrases untranslated, such as names of paintings or institutions, meaning I had to resort to Google from time to time to catch a nuance that a translation would have made clear. Apparently, according to the notes in the book, Boileau and Narcejac wanted to create a new style of mystery, away from the standard fare of whodunnits and hard-boileds, putting the victim at the centre of the plot. Boileau was responsible for coming up with the plots while Narcejac created the characterisations. In my view, a partnership that worked brilliantly – the plot of this is fiendishly complex, and Flavières’ character is a wonderful study of the effect of obsession on a weak mind. Overall I thought it was much darker than the film, mainly because Flavières may be a victim but there is no attempt to make him out as a good guy – an example of how to write an unlikeable character in such a way as to make him fascinating. The beginning is somewhat slow but I suspect that may be because I knew the plot from the film. As it begins to diverge in the second half I found it completely riveting as it drove inexorably towards its darkly satisfying ending.

Unusually for a Hitchcock film, I think the book actually delves more deeply into the psychology and makes it more credible. Hitchcock’s decision to elevate the importance of the vertigo aspects somehow makes his Ferguson a less complex and intriguing character than Boileau-Narcejac’s Flavières. And the ending of the book is much more satisfying than that of the film. For once, despite my abiding love for Mr Hitchcock, on this occasion the victory goes to the book!

NB This book was provided for review by the publisher, Pushkin Press.