Here are a few more I should run into soon…

My Looking Forward posts have made me thoroughly ashamed of all the books lingering on my TBR that I acquired because I’d enjoyed the author before. So I’m going to try my hardest to fit some of them into my reading schedule, starting with this one from Belinda Bauer, which I acquired in 2015!

The Blurb says: Twelve-year-old Steven Lamb digs holes on Exmoor, hoping to find a body. Every day after school, while his classmates swap football stickers, Steven goes digging to lay to rest the ghost of the uncle he never knew, who disappeared aged eleven and is assumed to have fallen victim to the notorious serial killer Arnold Avery.

Only Steven’s Nan is not convinced her son is dead. She still waits for him to come home, standing bitter guard at the front window while her family fragments around her. Steven is determined to heal the widening cracks between them before it’s too late. And if that means presenting his grandmother with the bones of her murdered son, he’ll do it.

So the boy takes the next logical step, carefully crafting a letter to Arnold Avery in prison. And there begins a dangerous cat-and-mouse game between a desperate child and a bored serial killer . . .

The Misty Harbour by Georges Simenon read by Gareth Armstrong

The last three for the #20(Audio)BooksOfSummer challenge. Having unexpectedly raced through the longest book left on my list over last weekend, it’s now looking possible that I might actually finish the challenge on time! First up, another admirably short Maigret, read as usual by the excellent Gareth Armstrong…

The Blurb says: A new translation of Georges Simenon’s gripping tale of lost identity. A man picked up for wandering in obvious distress among the cars and buses on the Grands Boulevards. Questioned in French, he remains mute… A madman?

In Maigret’s office, he is searched. His suit is new, his underwear is new, his shoes are new. All identifying labels have been removed. No identification papers. No wallet. Five crisp thousand-franc bills have been slipped into one of his pockets.

The Quiet American by Graham Greene read by Simon Cadell

One I haven’t read before from Graham Greene. It was the narrator as much as the book that made me choose this one as an audiobook – I have fond memories of the late Simon Cadell as an actor. The blurb sounds interesting too, though, and I’m intrigued to find out what it is that makes it “controversial”…

The Blurb says: “I never knew a man who had better motives for all the trouble he caused,” Graham Greene’s narrator Fowler remarks of Alden Pyle, the eponymous “Quiet American” of what is perhaps the most controversial novel of his career. Pyle is the brash young idealist sent out by Washington on a mysterious mission to Saigon, where the French Army struggles against the Vietminh guerrillas. As young Pyle’s well-intentioned policies blunder into bloodshed, Fowler, a seasoned and cynical British reporter, finds it impossible to stand safely aside as an observer. But Fowler’s motives for intervening are suspect, both to the police and himself, for Pyle has stolen Fowler’s beautiful Vietnamese mistress.

Originally published in 1956 and twice adapted to film, The Quiet American remains a terrifiying and prescient portrait of innocence at large. 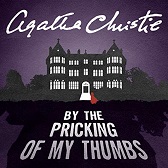 What better incentive to get to the end of the challenge than a Christie/Fraser/Tommy and Tuppence mystery! There are aspects of creepiness in this one that shiver my spine whenever I think of them…

The Blurb says: While visiting Tommy’s Aunt Ada at Sunny Ridge Nursing Home, Tuppence encounters some odd residents including Mrs. Lancaster who mystifies her with talk about “your poor child” and “something behind the fireplace”.

When Aunt Ada dies a few weeks later, she leaves Tommy and Tuppence a painting featuring a house, which Tuppence is sure she has seen before. This realization leads her on a dangerous adventure involving a missing tombstone, diamond smuggling and a horrible discovery of what Mrs. Lancaster was talking about.