Lawyer Alejandro “Sandy” Stern is old now and beginning to fail both physically and mentally, but when Kiril Pafko finds himself in trouble, Sandy agrees to defend him. Sandy’s daughter and legal partner, Marta, has decided to retire and Sandy recognises that he won’t be able to continue without her, so this will be his last case. Marta agrees to stay on till the case is over, and Sandy’s granddaughter, Pinky, is also helping out, both with the casework and as a kind of personal assistant to her ageing grandfather. As the case slowly unfolds, Sandy finds himself reflecting on his long career in the law. Having been diagnosed with cancer, Sandy is also facing his own mortality and finds himself thinking back to the people who have been important in his life – his family and friends. Kiril is one of those friends, a brilliant Nobel prizewinner, who has developed a drug that combats cancer with spectacular results. Too spectacular – Kiril is on trial for suppressing negative studies into the side-effects of the drug, and for the murder of patients who, the prosecution claims, had their lives shortened by taking it. Kiril is also accused of having made a fortune by selling shares in the drug just before the negative studies became public. Although for Sandy the main aim is to have Kiril legally acquitted, Kiril is just as concerned about the damage to his reputation in the scientific community, and Sandy finds that their differing objectives mean that his client oftens impedes his attempts to argue the case on legal grounds.

Sandy Stern first appeared in Presumed Innocent in 1987 and I, along with millions of others, have followed his career ever since. Turow has used him over the series to present a thoughtful and realistic picture of how the law works in the US, slowly and not always achieving true justice, but an essential part of the democratic system of ensuring the rights of the individual. Stern’s cases are usually set among the rich and powerful, and Turow clearly shows that justice depends as much on the quality of lawyer a defendant can afford as on the rights and wrongs of the case. The books are always billed as legal thrillers which I think does them an injustice. To me, these long ago crossed the line into literary fiction – they are far more about the human condition in all its frailties and strengths than about exciting courtroom drama, and the writing is of the highest quality. Calling them thrillers I’m sure attracts readers who are disappointed by the slow pace while putting off readers who would appreciate the deep concentration on character, the mechanics of the law and the society that depends on its judgements.

Turow rarely shows the legal system operating corruptly. In most cases, the judges want to do justice fairly according to the law, and the lawyers want to do the best for their clients, whether prosecuting or defending. Stern is a moral man who cares deeply about acting with integrity, even when it would be easier professionally or personally to cut a corner or two. That doesn’t mean he won’t defend someone who he believes has indeed broken the law; like Atticus Finch, Stern believes that justice only works when every accused person has the right to a defence, guilty or innocent. He also knows that even good people occasionally do wrong, if the motivation is strong enough. Sandy doesn’t see himself as either a moral or legal judge – he is a cog in the legal system, his belief in which has perhaps been the greatest passion in his long life. 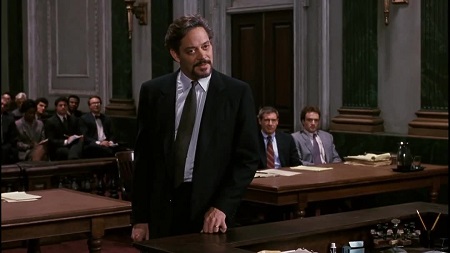 Raul Julia as a younger Sandy Stern in Presumed Innocent (1990)

I read this one months ago, when I was in the middle of my pandemic-inspired reviewing slump. It was round about the time that the rich nations were deciding on the safety of the Covid vaccines, and the news was full of stories about our various regulatory bodies and when they would get their act together to approve these and other promised life-saving treatments. There were also stories about Big Pharma’s share prices rocketing up and down with every rumour as to the success or otherwise of their version of a vaccine. At the same time as the book was giving me a detailed picture of the stages any new drug has to go through before it can be approved, the real world was confirming an issue raised in the book – that when rumour gets out of a life-saving treatment for a deadly disease the pressure to approve it becomes immense, almost unstoppable. And Turow shows that when companies stand to make or lose billions depending on whether their drug is approved, the temptation to hide negative reports or manipulate the statistics can be overwhelming. He also raises the question of risk – if a thousand people have their lives extended and improved by a drug, how much weight should be given to the hundred who may be killed by it earlier than they would have died anyway? And if the disease in question is terminal, does that change the balance? If a lawsuit means that the drug is withdrawn and the thousand who would have lived die as a result, is that justice? Questions that all seemed very relevant as reports began to come in about Covid vaccines causing blood clots in a tiny number of people, and entire nations stopping their vaccination programmes as a result.

Although this could certainly be read as a stand-alone novel, it gains from the emotional attachment long-term readers will have developed for Sandy over the years. We are seeing him now in his old age and for those of us who have grown to know him over the years, it’s a nostalgic and occasionally moving experience. He is failing physically, taking the very drug that the case is about to treat his own cancer. Although his mind is still as brilliant as ever, he is slower now, not as able to handle sudden developments on the spur of the moment, and increasingly reliant on his daughter’s support in the courtroom. He too is in nostalgic mood as the end of his career approaches, thinking back and assessing how his devotion to the law may have led him sometimes to fall down on the job of being a husband and father.

A wonderful finale to what has been a superb series. This may be the last we see of Sandy Stern but I sincerely hope that Turow will continue to give us his thoughtful and beautifully written novels for many years yet.

NB This book was provided for review by the publisher, Mantle Pan Macmillan via NetGalley.