Not all horror has to be horrifying to be entertaining. This story is distinctly lacking in fear factor and has no supernatural elements in it at all. But it has a lovely touch of human wickedness, a heroine I defy you not to fall in love with, some beautiful Italian settings, and a swoonworthy romantic hero…

Bella Rolleston had made up her mind that her only chance of earning her bread and helping her mother to an occasional crust was by going out into the great unknown world as companion to a lady.

Bella’s mother, having been deserted by her wastrel husband, now ekes out a precarious living as a seamstress. She and Bella may want for material things, but they each have a naturally happy nature and are friends as much as mother and daughter. So to Bella the idea of going off as a companion is in the nature of an adventure as much as a matter of necessity. She signs on with an employment agency where she is interviewed by a Superior Person…

The Person was of uncertain age, tightly laced in a black silk gown. She had a powdery complexion and a handsome clump of somebody else’s hair on the top of her head.

The Person is unimpressed by poor Bella’s lack of accomplishments but is happy to take her fee. Bella is no shrinking violet to be intimidated by Superior Persons, however, and after she has visited the agency a couple more times to remind the Person of her existence, the Person introduces her to a lady looking for a companion…

Never had she seen anyone as old as the old lady sitting by the Person’s fire: a little old figure, wrapped from chin to feet in an ermine mantle; a withered, old face under a plumed bonnet–a face so wasted by age that it seemed only a pair of eyes and a peaked chin. . . Claw-like fingers, flashing with jewels, lifted a double eyeglass to Lady Ducayne’s shining black eyes, and through the glasses Bella saw those unnaturally bright eyes magnified to a gigantic size, and glaring at her awfully.

Despite her appearance, Lady Ducayne seems kind and generous enough, and seems less concerned with Bella’s lack of accomplishments than she is to be assured that Bella is healthy and strong…

….‘I want a strong young woman whose health will give me no trouble.’
….‘You have been so unfortunate in that respect,’ cooed the Person, whose voice and manner were subdued to a melting sweetness by the old woman’s presence.
….‘Yes, I’ve been rather unlucky,’ grunted Lady Ducayne.

Very unlucky, as Bella later discovers! Lady Ducayne’s two previous companions, both also young girls who seemed healthy, had both soon faded and died of unspecified disease. Bella, however, is thrilled to be offered the job, and even more thrilled when Lady Ducayne asks her…

….‘You don’t mind spending the winter in Italy, I suppose?’
….In Italy! The very word was magical. Bella’s fair young face flushed crimson.
….‘It has been the dream of my life to see Italy,’ she gasped.

And at first the dream is dreamy indeed – beautiful scenery, luxurious hotel and Bella is given plenty of time to herself. She quickly makes friends with another visitor, Lotta Stafford, who is staying in the hotel with her handsome brother who has just passed his medical exams and is about to embark on a career as a doctor. Bella writes all about them to her mother back home…

….Her brother won’t allow her to read a novel, French or English, that he has not read and approved.
….‘”He treats me like a child,” she told me, “but I don’t mind, for it’s nice to know somebody loves me, and cares about what I do, and even about my thoughts.”‘
….Perhaps this is what makes some girls so eager to marry–the want of someone strong and brave and honest and true to care for them and order them about.

Sadly, it’s not long before Bella’s health begins to fade, and she is troubled by bad dreams and frequent wounds on her arms which Lady Ducayne’s doctor assures her are caused by mosquitoes…

‘And to think that such tiny creatures can bite like this,’ said Bella; ‘my arm looks as if it had been cut by a knife.’ 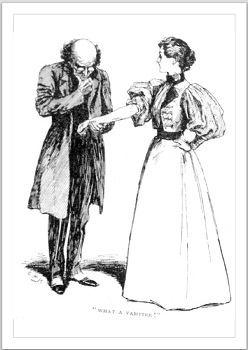 Lots of fun in this one! Herbert Stafford reminds me very much of Henry Tilney from Northanger Abbey, another handsome young hero I’m sure I would have found insufferable in real life but is perfectly suited to his heroine. Bella is charming and Lady Ducayne is wonderfully drawn as an old, old woman clinging desperately to life…

…he had never seen a face that impressed him so painfully as this withered countenance, with its indescribable horror of death outlived, a face that should have been hidden under a coffin-lid years and years ago.

Ouch! Must remember to keep using the wrinkle cream!

If you’d like to read this one, here’s a link. It’s a bit longer than many of the stories I’ve chosen, so save it for when you have a good half-hour or so to spare – it’s worth it though! Or you can find it in The Face in the Glass, a collection of Braddon’s stories, most of which, I should warn you, are much darker and sadder than this one.

(The porpy was fairly relaxed during this one…)