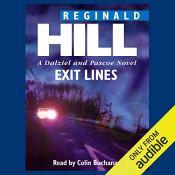 On a stormy November night, three elderly men die: one, murdered in his home; one, while walking home, perhaps by accident, perhaps not; and the third, hit by a car as he rode home from the pub on his bicycle. While looking into the first, definite murder Pascoe finds himself gradually suspecting that the second case may also have been the result of a violent attack. But the third case is the most difficult, since there is a suspicion that Pascoe’s boss, Dalziel, may have been drunkenly driving the car that hit the man on the bike…

Hill must have been writing this around the time of the big debate in the UK over “care in the community” – whether the elderly, disabled and otherwise vulnerable should be de-institutionalised from hospitals and care homes, and be helped to live independently in their own homes. In truth, many were left to fend for themselves with only the support of family, if they had any. Hill uses his three old men to show various aspects of this debate, but with a light touch – he never gets too heavily into polemics, although his left-wing bias becomes more obvious throughout the Thatcher era. He shows us the loneliness of some elderly people, and also the stress placed on families trying to juggle jobs and children with caring for elderly relatives. But while the three men at the centre of the story are victims to one degree or another, Hill doesn’t paint the picture as all bleak – he shows us the ordinary kindnesses of people looking out for each other, whether family or strangers, and he shows the official care system as quite caring on the whole, unusually, since it often gets a very bad rap in fiction, probably far worse than it deserves.

All this is interesting, but I must admit this isn’t one of my favourites in the series. The three storylines are too much, leading to loads of characters in each case, and I often found myself struggling to remember which plotline each person belonged to. The storyline around Andy’s possible drunk driving is a bit messy too, I feel, though it’s interesting to see the other police officers struggling to avoid the appearance of a police cover-up, while staying loyal to one of their own. On top of all this, Pascoe’s wife Elly is worried about her father, who seems to be showing the first signs of dementia. I felt Hill was trying to cover too many aspects of what it is to be elderly and as a result rather lost focus on the plots.

However, even a weaker Hill is better than most other crime fiction, and there’s plenty to enjoy here. Pascoe is at centre stage, leading the investigations while Andy is on enforced leave. PC Hector provides the humour – good-hearted, but so slow on the uptake as to be almost half-witted. (Andy calls him one of “Maggie’s Morons” – I can’t remember for sure the relevance of this, but I’m guessing Thatcher increased police recruitment dramatically, and this maybe led to a perceived reduction in standards? It’s amazing how quickly cultural references date and are forgotten.) PC Seymour makes his first appearance too – unlike Hector he has all the signs of being a very good officer and of making his way up through the ranks in time, although in this one he’s distracted by his attraction to one of the witnesses, a young Irish waitress with a love of ballroom dancing. And as a nicely humorous touch, each chapter is headed by the real or apocryphal “famous last words” of a historical person, such as “I am just going outside and may be some time.” (Capt. Lawrence Oates) or “Bugger Bognor!” (George V, on being told by doctors he should go to the seaside town to recuperate).

I listened to it this time, narrated by Colin Buchanan who played Peter Pascoe in the TV series. I have mixed feelings about his narration – I didn’t find it seriously hampered my enjoyment of the book, but I wasn’t keen on his interpretation of Dalziel, though his Wield and Pascoe are very good. He speaks far too fast for my taste and I was constantly finding myself jumping back a bit to pick up something I missed. And while I’m no expert on regional accents, I couldn’t help feeling that a lot of his Yorkshiremen sounded more like Geordies. I liked it enough, though, to go ahead and get the next one on audio – maybe he’ll win me over in time.

So a good read, even if it’s not quite up to the standards of the best in this excellent series. It would work as a standalone, but would probably be better appreciated by a reader who already knew the characters from the earlier books.