Oh, dear! Back in lockdown, back in reading slump! I’ve only finished one book in the whole of October so far – this is becoming critical! It’s extremely hard to keep a book blog running if you can’t be bothered to read books or write reviews, I’ve discovered. I may have to come up with something creative – a cake-tasting blog, perhaps? All this is my excuse for why the TBR has crept back up by two to 199. Still below the magical 200, though…

Here are a few more that will be sliding off soon…

The Blurb says: Woods play an important and recurring role in horror, fantasy, the gothic and the weird. They are places in which strange things happen, where you often can’t see where you are or what is around you. Supernatural creatures thrive in the thickets. Trees reach into underworlds of earth, myth and magic. Forests are full of ghosts.

In this new collection, immerse yourself in the whispering voices between the branches in Wistman’s Wood on Dartmoor, witness an inexplicable death in Yorkshire’s Strid Wood and prepare yourself for an encounter with malignant pagan powers in the dark of the New Forest. This edition also includes notes on the real locations and folklore which inspired these deliciously sinister stories.

The Last of the Mohicans by James Fenimore Cooper

Courtesy of Oxford World’s Classics. I’m sure there was a creaky old black and white TV adaptation of this when I was a kid, but apart from the character names I remember nothing else about it. Sounds as if it could be wonderful… or awful! We’ll see…

The Blurb says: The second of Cooper’s five Leatherstocking Tales, this is the one which has consistently captured the imagination of generations since it was first published in 1826. It’s success lies partly in the historical role Cooper gives to his Indian characters, against the grain of accumulated racial hostility, and partly in his evocation of the wild beautiful landscapes of North America which the French and the British fought to control throughout the eighteenth century. At the center of the novel is the celebrated `Massacre’ of British troops and their families by Indian allies of the French at Fort William Henry in 1757. Around this historical event, Cooper built a romantic fiction of captivity, sexuality, and heroism, in which the destiny of the Mohicans Chingachgook and his son Uncas is inseparable from the lives of Alice and Cora Munro and of Hawkeye the frontier scout. The controlled, elaborate writing gives natural pace to the violence of the novel’s action: like the nature whose plundering Copper laments, the books placid surfaces conceal inexplicable and deathly forces.

The Progress of a Crime by Julian Symons

Courtesy of the British Library again! I’ve loved the previous books of Julian Symons that they’ve re-published, so have high hopes for this one. The cover’s very different from their usual style, isn’t it?

The Blurb says: The murder, a brutal stabbing, definitely took place on Guy Fawkes night. It was definitely by the bonfire on the village green. There were definitely a number of witnesses to a row between a group of Teddy Boys. And yet, was it definitely clear to anybody exactly what they had seen?

In the writhing, violent shadows, it seems as if the truth may have gone up in smoke. 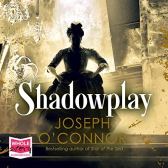 Since I’m currently listening to Dracula, this seems like the obvious one to choose for my next listen, especially since I’ve seen some great reviews appearing around the blogosphere. It’s narrated by Anna Chancellor, whom I love, and Barry McGovern, whom I don’t know very well but am told is great, so I’m looking forward to filling some of the dark lockdown evenings with this…

The Blurb says: 1878: The Lyceum Theatre, London. Three extraordinary people begin their life together, a life that will be full of drama, transformation, passionate and painful devotion to art and to one another. Henry Irving, the Chief, is the volcanic leading man and impresario; Ellen Terry is the most lauded and desired actress of her generation, outspoken and generous of heart; and ever following along behind them in the shadows is the unremarkable theatre manager, Bram Stoker.

Fresh from life in Dublin as a clerk, Bram may seem the least colourful of the trio but he is wrestling with dark demons in a new city, in a new marriage, and with his own literary aspirations. As he walks the London streets at night, streets haunted by the Ripper and the gossip which swirls around his friend Oscar Wilde, he finds new inspiration. But the Chief is determined that nothing will get in the way of his manager’s devotion to the Lyceum and to himself. And both men are enchanted by the beauty and boldness of the elusive Ellen.

This exceptional novel explores the complexities of love that stands dangerously outside social convention, the restlessness of creativity, and the experiences that led to Dracula, the most iconic supernatural tale of all time.