What is your favourite classic? And why?

The thing is, I’ve talked about my favourite classic, Bleak House, about a million times on the blog already and I’m frightened you might all throw rotten tomatoes at me if I do it again!

Then I had a rare moment of inspiration! I’ll ask Tuppence to do the post! (Tommy isn’t much of a reader.) And she very graciously consented to oblige, so here she is… 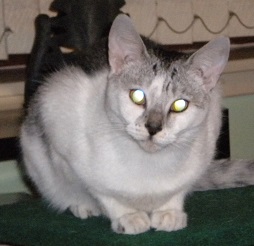 Hello, humans! I’m going to make this brief because I’m missing out on valuable napping time here, so sit up straight and pay attention. There is obviously only one book that could qualify for the designation of Classic and therefore it must be my favourite, as my servant could have easily worked out for herself if she wasn’t so – no offence – thick. Frankly if it wasn’t for the fact that she knows where the cat treats are hidden, we wouldn’t keep her around – she’s not much good for anything else. Except cleaning the litter trays. But I digress! Excuse me one moment while I groom my tail. Ah, that’s better!

As I was saying, the only Classic is…

Three Men in a Boat (To Say Nothing of the Dog)

Well, I’m off to catch up on my beauty sleep now, not that I need it. What? Good grief, now my servant is insisting that I explain why! I’d have thought that would be obvious to one of the meanest intelligence, but she is and apparently it isn’t. Oh well, I suppose we occasionally have to make an effort to boost staff morale around here. But I’m awfully tired and frankly a bit bored, so instead of explaining, why don’t I just let you read the passage that lifts this book so high above all others?

I do not blame Montmorency for his tendency to row with cats; but he wished he had not given way to it that morning.

We were, as I have said, returning from a dip, and half-way up the High Street a cat darted out from one of the houses in front of us, and began to trot across the road. Montmorency gave a cry of joy – the cry of a stern warrior who sees his enemy given over to his hands – the sort of cry Cromwell might have uttered when the Scots came down the hill – and flew after his prey.

His victim was a large black Tom. I never saw a larger cat, nor a more disreputable-looking cat. It had lost half its tail, one of its ears, and a fairly appreciable proportion of its nose. It was a long, sinewy- looking animal. It had a calm, contented air about it.

Montmorency went for that poor cat at the rate of twenty miles an hour; but the cat did not hurry up – did not seem to have grasped the idea that its life was in danger. It trotted quietly on until its would-be assassin was within a yard of it, and then it turned round and sat down in the middle of the road, and looked at Montmorency with a gentle, inquiring expression, that said:

Montmorency does not lack pluck; but there was something about the look of that cat that might have chilled the heart of the boldest dog. He stopped abruptly, and looked back at Tom.

Neither spoke; but the conversation that one could imagine was clearly as follows:-

THE CAT: “Can I do anything for you?”

THE CAT: “Don’t you mind speaking, if you really want anything, you know.”

MONTMORENCY (BACKING DOWN THE HIGH STREET): “Oh, no – not at all – certainly – don’t you trouble. I – I am afraid I’ve made a mistake. I thought I knew you. Sorry I disturbed you.”

THE CAT: “Not at all – quite a pleasure. Sure you don’t want anything, now?”

MONTMORENCY (STILL BACKING): “Not at all, thanks – not at all – very kind of you. Good morning.”

Then the cat rose, and continued his trot; and Montmorency, fitting what he calls his tail carefully into its groove, came back to us, and took up an unimportant position in the rear.

To this day, if you say the word “Cats!” to Montmorency, he will visibly shrink and look up piteously at you, as if to say:

Ah, yes! Sheer poetry! The plot, the characterisation, the triumph of good over evil – it has everything! Plus there’s no pleasure greater than laughing at a dog.

Now, if you’ll excuse me – well, frankly, even if you won’t – I’m done here. Please don’t disturb me for a good eighteen hours.

Thank you, Tuppence. I’m overwhelmed by your kindness and condescension! I’m so lucky to have you as my boss! Have a lovely nap and let me know if there’s anything I can do for you…

What do you think of Tuppence’s choice? Is there another classic that you feel deserves her consideration?

HAVE A GREAT TUESDAY! 😀

63 thoughts on “A feline favourite…”