….A boy rushed past him carrying a rock the size of a soda can, and Shawn wondered where it could’ve come from, this rough chunk of nature in a village trimmed with locked doors and polished glass. Then he noticed three wide-shouldered men surrounding a tree, breaking off branches. They looked almost calm – the fire in their eyes was not wildfire, but a controlled, channelled anger.
….He followed them. He wasn’t alone – the crowd seemed to converge behind them. From the corner of one eye, he saw a flash of movement, a boy jumping to land on a parked car, but he stayed behind the three men with their branches, trailing them with a sense of wonder. Fists flew up all around him, and voices rose in exuberance and fury, their words swarming together until they morphed into chants. “Black power!” “Fight the power!”
….And the men swung their branches, shattering a wall of glass.

~Your House Will Pay by Steph Cha

….The statues are disappearing. They are covered in sandbags, or wooden planking. They’ve been carried down to cellars, or camouflaged. Peter’s bronze horse no longer rears above the city, smashing the air. His hooves beat against the sand which packs against him and the planks that mask him.
….The whole city is going into disguise, and its people are going into disguise with it, carrying pickaxes, spades and entrenching tools over their shoulders, smearing their faces with sweat and dirt, clodding their boots with mud. They’ve taken trams and trains out of the city, to work on its defences. They sleep in hay, boil water for tea over twig fires, and bandage their blistered city hands with rags. Students, schoolchildren, women, old men: they’re all here, digging for their lives.

~The Siege by Helen Dunmore – now abandoned, due to a) present tense and b) the author having forgotten to include a plot… 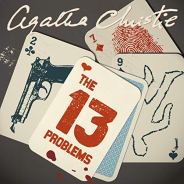 ….“…I, for one, felt a curious reluctance to enter that dark foreboding belt of trees. Something stronger than myself seemed to be holding me back and urging me not to enter. I felt more definitely convinced than ever of the evilness of the spot. I think that some of the others experienced the same sensations that I did, though they would have been loath to admit it. The trees were so closely planted that the moonlight could not penetrate. There were a dozen soft sounds all round us, whisperings and sighings. The feeling was eerie in the extreme, and by common consent we all kept close together.
….“Suddenly we came out into the open clearing in the middle of the grove and stood rooted to the spot in amazement, for there, on the threshold of the Idol House, stood a shimmering figure wrapped tightly round in diaphanous gauze and with two crescent horns rising from the dark masses of her hair.
….“‘My God!’ said Richard Haydon, and the sweat sprang out on his brow.”

~The Thirteen Problems by Agatha Christie

….Dark human shapes could be made out in the distance, flitting indistinctly against the gloomy border of the forest, and near the river two bronze figures, leaning on tall spears, stood in the sunlight under fantastic head-dresses of spotted skins, warlike and still in statuesque repose. And from right to left along the lighted shore moved a wild and gorgeous apparition of a woman.
….She walked with measured steps, draped in striped and fringed cloths, treading the earth proudly, with a slight jingle and flash of barbarous ornaments. She carried her head high; her hair was done in the shape of a helmet; she had brass leggings to the knee, brass wire gauntlets to the elbow, a crimson spot on her tawny cheek, innumerable necklaces of glass beads on her neck; bizarre things, charms, gifts of witch-men, that hung about her, glittered and trembled at every step. She must have had the value of several elephant tusks upon her. She was savage and superb, wild-eyed and magnificent; there was something ominous and stately in her deliberate progress. And in the hush that had fallen suddenly upon the whole sorrowful land, the immense wilderness, the colossal body of the fecund and mysterious life seemed to look at her, pensive, as though it had been looking at the image of its own tenebrous and passionate soul.

~Heart of Darkness by Joseph Conrad

(Context: a verra Scottish doctor, McBane, and a very English Major, Boddy, attempt to have a conversation…)

….The Major . . . faced the others with a solemn expression. “There seems no doubt, eh? It is suicide – what?”
….“You’d be a fool to go lookin’ for any other explanation,” said McBane witheringly. “But I wonder why she deed it.”
….North shook his head. “We’ve no line on the motive so far, sir.”
….“Damn all,” added Boddy. “Damn all, McBane.”
….“Wi’ a wumman,” said McBane philosophically, “whatever she does ’tis a waste o’ guid time to look for a motive. A wumman’s motiveless, wi’oot direction – a boot wi’oot a rudder.”
….“Boot?” asked the Major with a puzzled look.
….“Aye – a sheep, mon, a sheep wi’oot a body at the helm.”
….“A sheep?” inquired the Major. “Confound it all, McBane, why a sheep?”
….McBane eyed him with a baleful glint. “I’m theenking your stupeedity is too profound to be genuine. Wull ye quit your havering, mon?”

So… are you tempted?