Sins of the fathers…

In 1775, a group of elderly men gather in the Maypole, an ancient inn owned by John Willett, and tell a stranger about a murder that was committed nearby years before. The owner of the large house in the neighbourhood, Mr Harefield, was killed, apparently during a robbery, and some time later another body was found, identified as his servant, also murdered. The servant’s son, Barnaby Rudge, was later born an idiot, assumed to be so because of the shock his widow had suffered during her pregnancy. Now Barnaby is a happy young man, earning a little money by running messages and spending the rest of his time running wild in the countryside, revelling in the natural world which he loves. But Barnaby is gullible and easily influenced, which will one day lead him into serious trouble.

Skip forward five years to 1780, and trouble is abroad in the streets of London. Lord George Gordon is leading protests against the passing of an act that will remove some of the legal restrictions under which Catholics have suffered since the time of the Reformation. A weak man himself, Gordon is surrounded by unscrupulous men using him for their own ends. Some of his followers are men of true religious beliefs, bigoted certainly, but honourable in their own way. But many, many others are the detritus of the London streets – the drunks and thieves, the violent, the cruel. Others are the desperate – those whose argument with the government is nothing to do with religious questions about which they know little and care less. These are the poor and marginalised, those with no hope. Together these men and women will become that great fear of the establishment – the mob, wild, destructive and terrifying. And among them and affected by them are the characters we met in the Maypole, including young Barnaby Rudge… 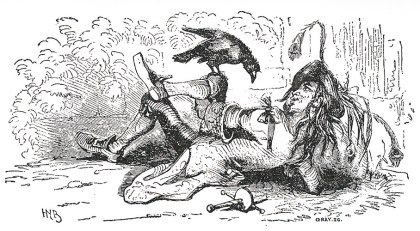 Barnaby and his pet raven, Grip

Structurally this one is a bit of a mess. The two halves are each excellent in their own way but the sudden time shift halfway through, complete with a total change of central characters and tone, breaks the flow and loses the emotional involvement that was built up in the first section. Barnaby Rudge is also an unsatisfactory hero in that, being an idiot with no hope of improvement, there’s no romance for him nor does he get to be heroic. However, even a weaker Dickens novel is always enjoyable and this is no exception. My four star rating is a comparison to other Dickens’ novels – in comparison to almost every book out there, this is still head and shoulders above them.

If I’d been Dickens, I’d have called it Dolly Varden – she pulls the two strands together more than most of the other characters. Daughter of locksmith Gabriel, Dolly is the major love interest of the character who appears to be the hero in the first half, Joe Willett, son of the owner of the Maypole. Young, flirtatious and silly, Dolly plays hard to get at the wrong moment and Joe takes the King’s shilling and goes off to fight those pesky American colonists who were having some kind of little rebellion round about then. Five years on, Dolly is still single, secretly hoping that one day Joe will return. But her beauty has made her a target for other men, including two who will play major roles in the second half of the book. Dickens often showed how vulnerable women were to unscrupulous men, but with Dolly he takes it a stage further. There is one scene in particular where she is the victim of what can only be described as a sexual assault, and later, in the riots, Dickens doesn’t hold back from showing how rape is one aspect of what happens when there’s a breakdown in social order. While it’s all done by hints and suggestion, very mild to our jaded modern eyes, I imagine it must have been pretty shocking to the original readership. Dolly is an intriguing Dickens heroine – unlike many of his drooping damsels, she’s a lot of fun, revelling in her beauty and the effect it has on men while still being kind-hearted and true. He allows her to grow and mature in those five years, which is not always the case with his heroines, and she’s a great mix of vulnerability and strength of character. 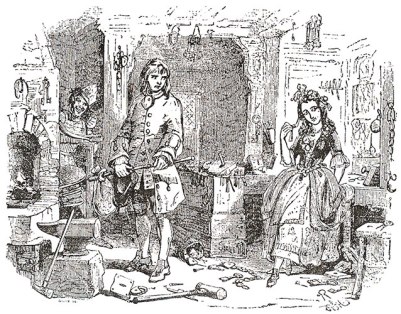 Dolly playing hard to get…

The first half is the fairly typical Dickens fare of various eccentric characters and young lovers and a mystery in the past, of the style of Oliver Twist or Martin Chuzzlewit, say. The second half is much more reminiscent of the later, and much better, A Tale of Two Cities. The mob scenes in this are just as horrifying, but the characters aren’t as unforgettably drawn as Sidney Carton or Madame Defarge. More than that, it seems as if Dickens is less sure of where his sympathies lie. The Gordon rioters are fighting to ensure that anti-Catholic laws remain in place, and clearly Dickens thinks this is abhorrent. But that means that he almost comes over as pro-Establishment, since on this occasion the Establishment are the ones wanting to do away with those laws. So while in Two Cities he’s against the mob but understanding of the poverty and inequality that drives them, here he gets a bit muddly – he clearly wants to suggest that it’s all because they’re poor and uneducated but has to also show that they’re religious fanatics, fighting not to better themselves but to keep others down. However, I thoroughly enjoyed Dennis the hangman, who is not only a typically Dickensian villain but is also based on the real-life hangman of the time, and gives Dickens an opportunity to show the gruesome barbarity of this form of social control.

As always with Dickens there are far too many aspects to cover in a review without it becoming as long as one of his novels. Overall, this is one where the individual parts may not come together as well as in his greatest novels, but it’s well worth reading anyway, for the riots and for the interest of seeing Dickens experiment with the historical novel as a form. I read the Oxford World’s Classics version – my first experience of a Dickens novel in their edition – and thoroughly enjoyed having the informative introduction and particularly the notes, which I found extremely helpful since this is an episode of history I knew little about. The book is also generously full of the original illustrations. I say it every time but I’m so glad I live in a world that once had Dickens in it!