Drama in the deeps…

A mysterious sea monster has been damaging ships around the world, so a team is put together to hunt it down. The famous French naturalist Dr Aronnax happens to be in America at the time, so is invited to join the hunting party. Soon he will discover that the monster is in fact man-made – a submarine built and captained by the enigmatic Captain Nemo, and Aronnax and his companions will find themselves unwilling guests aboard the Nautilus as Nemo takes them on a fabulous journey beneath the seas and oceans of the world. But Nemo is more than a simple explorer – gradually Aronnax begins to suspect there is a darker purpose to his travels…

The beginning of the book is very reminiscent of my old friend Moby-Dick, as the hunting party sets off to sail rather aimlessly around the vastness of the world’s oceans hoping that they might coincidentally happen upon the sea-monster. Aronnax’s servant, Conseil, accompanies him, and on board they meet Ned Land, a master harpoonist whose task is to kill the monster should they find it. When their ship finally has a disastrous encounter with the Nautilus, these three men will be taken aboard as captives, although for the most part they will be treated more as guests, free to participate in the submarine’s adventures but not free to leave it.

And what adventures! They will visit coral reefs and underwater passages between seas; they will slaughter all kinds of things for food or fun; they will visit islands inhabited only by savage tribes and find themselves in danger of being slaughtered themselves for food or fun, which seems like poetic justice to me! They will observe all kinds of strange creatures that live in the depths, some of them real, some mythical. Aronnax and his faithful assistant Conseil will catalogue hundreds – nay, thousands – of different species of fish and underwater plant life. And Aronnax, our narrator, will kindly list most of these, giving their Latin names and telling us their biological classification. 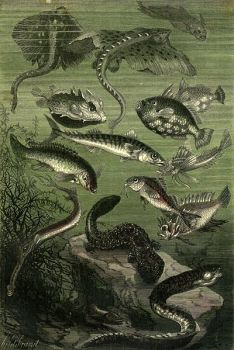 In the 89th genus of fish classified by Lacépède, belonging to the second sub-class of osseous fish characterized by a gill cover and a bronchial membrane, I noticed the scorpion fish, whose head has stings on it and which has only one dorsal fin: according to the subgenus, these creatures are either devoid of small scales or covered in them. The latter subgenus provided us with specimens of didactyls 30 to 40 centimetres long, with yellow stripes and fantastic-looking heads.

Now you may (possibly) be thinking that sounds quite interesting but, believe me, by the time you’ve travelled about four thousand leagues you will never be able to walk past another sushi restaurant without shuddering. Fortunately, I am a master of the art of skipping – obviously, or I’d never have made it through Moby-Dick’s interminable whales either – so very quickly learned to recognise when Aronnax was going to become the world’s leading fish bore and jump a few paragraphs. This worked excellently since, in between the excruciating fishiness and the mind-numbing technical descriptions of the submarine, there’s lots of adventure and some interesting insights on the world as it was in Verne’s day. 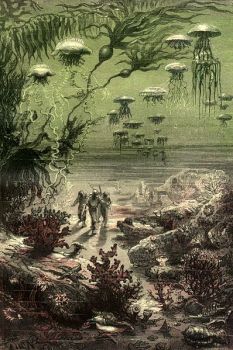 The characterisation is good too. Aronnax doesn’t much mind his status as prisoner since, as a scientist, the journey is giving him the opportunity to observe first-hand things that no man has seen before. Conseil is simply his faithful servant – wherever Aronnax is is where Conseil wishes to be – but he provides some gentle humour and acts as a bridge between Aronnax and the third member of the group, Ned Land. Ned feels his imprisonment harshly, especially since Nemo is not keen on letting him harpoon everything he sees, and he’s always pushing Aronnax to consider ways to escape. And Nemo himself is an ominous, brooding presence on board – a scientist too, but who has deliberately cut himself off from the world of men. Aronnax studies him much as he studies the other ocean life, and comes to think that he has perhaps suffered some tragedy or injustice that has driven him to this strange existence. He is another Captain Ahab, although he is sailing in the belly of the monster of the deep rather than chasing after it. But he is driven by the same desire – revenge! 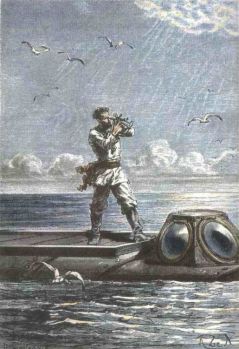 Two hours after leaving the Nautilus we crossed the tree-line; the mountain peak towered 100 feet above our heads, its dazzling radiation projecting a shadow on the slope below. A few petrified shrubs ran here and there in grimacing zigzags. Fish rose as one before our feet like birds surprised in tall grass. The rocky massif was hollowed out with impenetrable burrows, deep caverns, and pits at the bottom of which I could hear frightening things moving about. I blanched when I spotted an enormous antenna blocking my route, or terrifying claws clattering shut in the darkness of a cavity! Thousands of luminous points shone in the darkness. They were the eyes of huge crustaceans lurking in their dens, of gigantic lobsters standing to attention like halberdiers and waving their legs with metallic clanks, of titanic crabs set like cannon on their mounts, and of awe-inspiring squid twisting their tentacles into a living brush of snakes. 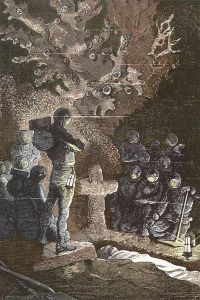 This is a new translation by William Butcher who is an expert on Verne, and that expertise shows in the avoidance of any of the obscurity that can happen in translations, especially of older works. He also wrote the excellent introduction and notes, which give a lot of insight into the writing of the book – what influenced Verne, his ongoing negotiations with his publisher to get the book into shape, how the book fits into his overall body of work, etc., along with a literary analysis of the various themes. There’s lots of actual science in the book, and unfortunately I lacked the knowledge to know what was still considered true and what had been superseded since Verne’s day. I was a little disappointed that the notes didn’t do a bit more fact-checking, but there are so many facts it would have been a huge undertaking. However, the notes do explain many references to contemporary scientists and events that would otherwise have gone over my head.

Truthfully, if I factored in those endless fish-lists, I’d find it hard to rate the book as more than a 4-star read, but since I found it easy to skip them without missing anything essential to the story, they didn’t bother me (and fish enthusiasts might even enjoy them!). The descriptions of the wonders of the deeps, the glimpses of other civilisations, the mystery surrounding Captain Nemo and the thrilling adventure aspects all more than made up for the excessive fish-detail, making it a five-star read for me – a true classic!

NB This book was provided for review by the publisher, Oxford World’s Classics. The illustrations, which I’ve taken from Wikimedia Commons, are by Alphonse de Neuville (1835—1885) or Édouard Riou (1833-1900). 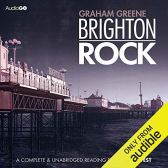