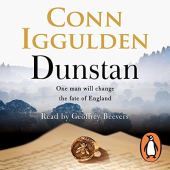 Young Dunstan and his brother are sent off by their father to be educated by the monks in the abbey at Glastonbury. There, Dunstan will become fascinated by the processes involved in construction and smithing, and will decide early on that one day he will replace the current abbey with a great building for the glory of God and, much more importantly, for the glory of Dunstan. To achieve this aim he must become a monk and must cultivate the rich and powerful who will be able to fund his dream. This is the story of Dunstan’s long life, of the seven Kings he served and of the gradual coalescence of all the small kingdoms into one coherent England, ruled by a single monarch.

I’ve seen so much praise for Conn Iggulden over the years, but generally he writes “sword and sandals” stories about early wars, and the periods and subjects rarely appeal to me. So I was delighted to get the opportunity to try his work in this story, which is much more to my taste. You can now sign me up as a fan – he’s a great storyteller, and this is a great story!

I didn’t know much about the real Dunstan and deliberately avoided finding anything out before reading, so that I could accept Iggulden’s version at face value. His historical notes at the end of the book remind us that our knowledge of this early period – the 10th century, AD – is patchy, with many gaps that may never be filled. The main facts of Dunstan’s life are well documented, and Iggulden sticks to them. But that leaves him plenty of room to use his imagination to fill in all the bits that aren’t known and to create a characterisation that could be true, and is certainly believable.

The story is given in Dunstan’s own voice, writing his reminiscences towards the end of his life. This makes it a perfect format for an audiobook, and the narrator, Geoffrey Beevers, does a wonderful job of bringing the man and his story to life. 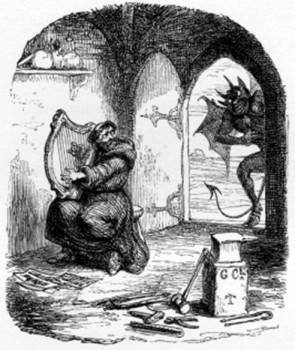 Iggulden’s Dunstan is hardly saintly, especially in his youth and early adulthood. He’s deliciously wicked and does some pretty terrible things during his life, but somehow he keeps the reader on his side. I think it’s because he doesn’t really attempt to explain too much or to justify his actions – he occasionally feels guilt and a twinge of remorse, but he never wallows or gets mawkish about it. Instead he shows us the inherent instability and violence in a society almost perpetually at war, either between internal rival factions or against the Viking raiders who were a constant threat, and the use and abuse of power that was commonplace among those who could wield it. All of this makes Dunstan’s own actions seem far less out of the ordinary than they would be in a less lawless environment.

The stream of Kings all with annoyingly similar names provide the drama that keeps the story moving along at a good pace. Some are Dunstan’s friends, some mistrust him, some are outright enemies. As he ages, some of the later ones, whose fathers and grandfathers Dunstan had known, look on him as a mentor, and in some cases, at a time when primogeniture wasn’t quite as established as it later became, Dunstan is influential in ensuring their accession to the crown. Again, Iggulden appears to stick to the known facts but provides fictional stories to fill the spaces in-between, making each of these monarchs fully rounded humans rather than just names and dates in a history book, and keeping the whole thing firmly rooted in the attitudes of the day.

As a monk and later Abbot of Glastonbury, and finally rising to be Archbishop of Canterbury – the top religious job in England – the early church plays a role in the story too, and again I found Iggulden’s portrayal entirely convincing. This was centuries before the Reformation, of course, but the corruptions in the Roman church already existed, and both real-life and fictional Dunstan were involved in rooting out the worst of these and transforming the Church in England to follow the Benedictine rule. Iggulden’s Dunstan, though, is hardly a devout, pious man, although his relationship with God and his religion deepens as he ages. He recognises his sins, but believes that God will weigh them in the balance with his great works – the buildings he constructed, his role as Royal Treasurer, his influence over the kings and, through them, the realm, and his transformation of the Church.

This is a lengthy book with a huge cast of characters, but Iggulden makes them all individual so that the reader doesn’t feel swamped by them. I felt fully immersed in Dunstan’s world, even though it took me weeks to listen to the whole thing, and I feel I’ve learned a lot about a period of history that was previously a blank to me. I do hope Iggulden writes more on subjects like this, although I’m now tempted to try his sword and sandals books after all…

43 thoughts on “Dunstan by Conn Iggulden”