The spice of life…

This is a collection of 22 stories or extracts which, although the collection is part of a horror range, cross through a variety of genres. My previous experience of Robert W Chambers, amounting to one short collection of four stories, The King in Yellow, had left me rather underwhelmed, so I had fairly low expectations going into this. Yet again, I was proved wrong! The quality and range of the stories here and their general enjoyability made me appreciate why Chambers was a best-selling author of his day.

The book is divided into two parts: Origins (1895-1899) and Diversions (1900-1938). Each section has an introduction by Hugh Lamb, telling us a little about Chambers’ life and more about his development as a writer. The first section is mainly horror and weird fiction and fantasy, including a few of his The King in Yellow stories. Having become successful as a result of these, Chambers began to expand his range so that many of the stories in the second section would be better described as adventures or even romances.

Chambers lived for some years in France and many of his stories are set there or in England, as well as in his native America. There are a few that are only a few pages, but most are around twenty to thirty pages which I always find a good length for a short story, allowing room for some plot and character development. As time passes, the stories begin to include more humour and some pretty over-the-top high romance, and the quality of the writing, especially in his descriptions, is exceptionally high. He developed a couple of series characters: Mr Smith, a zoologist from the Bronx Zoo who goes off on highly entertaining adventures in search of reputedly extinct or fabulous creatures; and Westrel Keen, the Tracer of Lost Persons, a private investigator whose deductive skills would put Sherlock Holmes to shame (though with considerably less credibility to them). The supernatural often appears, as does the mysterious Orient in “Yellow Peril” stories, but the horror of the early stories is rarely repeated in the later ones.

Here are a few of the ones I enjoyed most:

A Pleasant Evening – a beautifully written story which, although ghostly, is mostly the story of a tragic love affair. The narrator meets separately two strangers in the Bronx Park, who gradually reveal to him a story of injustice and tragedy. Along the way, Chambers gives some wonderful descriptions of New York, the place and its people, the constant rush and battle in pursuit of gold. This was the story that first made me realise I had seriously underestimated him.

Across the long meadow I could see the roofs of the city faintly looming above the trees. A mist of amethyst, ever deepening, hung low on the horizon, and through it, steeple and dome, roof and tower, and the tall chimneys where thin fillets of smoke curled idly, were transformed into pinnacles of beryl and flaming minarets, swimming in filmy haze. Slowly the enchantment deepened; all that was ugly and shabby and mean had fallen away from the distant city, and now it towered into the evening sky, splendid, gilded, magnificent, purified in the fierce furnace of the setting sun.

The Maker of Moons – a fantastic story that is a mash-up of weird, horror and adventure with more than a dash of Yellow Peril thrown in. I described this one more fully in a previous Tuesday Terror! post. 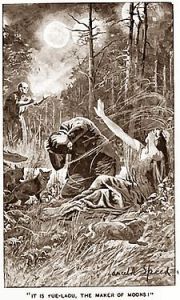 The Messenger – the longest of the stories, this tells of the finding of a mass grave in Brittany and a family curse. There’s some deliberate vagueness around the narrator and the history of the place which adds to a well-developed feeling of dread and some genuinely scary moments. It has some wonderful imagery and an excellent denouement that is both horrifying and haunting.

The Third Eye – I thoroughly enjoyed all three of the included stories about Mr Smith of the Bronx Zoo and would happily seek out more of them. This one tells of his search to confirm an old Seminole legend of a tribe of men with a third eye, somewhere in the Black Bayou region. This is written for laughs and gets them in abundance. Mr Smith is a great narrator – he manages to reveal things to the reader that his own obtuseness prevents him recognising for himself. And he’s always on the look-out for love, usually with consequences that are sad for him but fun for the reader.

The moon was magnificent; and I think the pretty waitress must have been a little tired, for her head dropped and nodded at moments, even while I was talking to her about a specimen of Euplectilla speciosa on which I had written a monograph. So she must have been really tired, for the subject was interesting.

The Bridal Pair – a ghostly romance about a young man who, when a child, loved a little girl called Rosamund but forgot her as they grew up. Now, as a man, he suddenly starts seeing a woman everywhere… this is pure romantic slush of the soppiest sort, but very well done, and I freely admit it made me cry!

There were some I didn’t like so well, mainly the early King in Yellow ones and the three extracts Lamb has included from Chambers’ most famous novel, The Slayer of Souls, which I didn’t feel worked as standalone stories. But the majority got either four or five stars and several of them are stories I will undoubtedly read again. Maybe he’s better known than I think, but personally I had never heard of him till recently. I wondered if perhaps his sheer variety of styles means that he’s difficult to pigeon-hole and so gets overlooked, but on the basis of these stories I feel he certainly deserves to be remembered and read. Highly recommended!

NB This book was provided for review by the publisher, Collins Chillers.

21 thoughts on “Tuesday Terror! Out of the Dark by Robert W Chambers”