The evolution of the rippling bicep…

Lord Greystoke and his young wife Lady Alice are on their way to take up a new colonial appointment in Africa when the crew of the ship they are on mutiny. The mutineers drop their passengers off on a wild coast, far from civilised habitation, but close to the jungle. For a while they survive, long enough for Lady Alice to bear the son she was already carrying. But when disaster strikes, leaving the baby all alone in the world, he is adopted by a tribe of apes and grows up learning their ways, unaware of his own heritage. However, when he discovers the hut his parents built and all their belongings including their books, he realises he is different from the other apes. And then more white people are marooned in the same place by another bunch of mutineers, and he sees the lovely Jane…

Basically, this is simply a romping adventure story that is as enjoyable now as when it took the reading public’s imagination by storm back in 1912, when it was first published in the pulp magazine The All-Story. There’s something about the way Burroughs tells stories that makes them great fun despite all the many ways he transgresses modern sensibilities. It’s a sort of innocent charm – I feel sure he’d be amazed and appalled if he thought he’d offended anyone. He so truly believes that white Anglo-Saxons are the pinnacle of evolution and that women will forgive any little character flaws (like cannibalism, for example) so long as a man has rippling biceps and the ability to fight apes single-handed. (Both jolly good attributes in a man, I admit – I wonder if Rafa fights apes…) 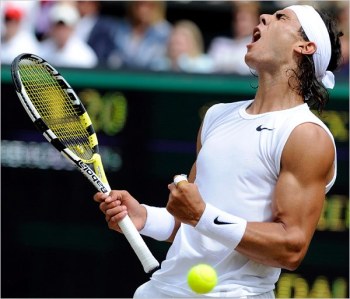 Evolution was still a relatively new idea when Burroughs was writing this, and many authors were exploring the subject in different ways. Burroughs’ ideas may seem pretty shocking to us now, but they were fairly mainstream at the time. He shows a kind of pyramid of evolution starting with real apes that we would recognise as such. Then there’s the tribe that adopt Tarzan, who are a kind of link between ape and man, with the beginnings of a verbal language and some basic forms of ritual, such as…

…the fierce, mad, intoxicating revel of the Dum-Dum.
….From this primitive function has arisen, unquestionably, all the forms and ceremonials of modern church and state, for through all the countless ages, back beyond the last, uttermost ramparts of a dawning humanity our fierce, hairy forebears danced out the rites of the Dum-Dum to the sound of their earthen drums, beneath the bright light of a tropical moon in the depth of a mighty jungle which stands unchanged today as it stood on that long forgotten night in the dim, unthinkable vistas of the long dead past when our first shaggy ancestor swung from a swaying bough and dropped lightly upon the soft turf of the first meeting place.

Burroughs’ depiction of the ape society is great – he humanises the apes just enough so that we see them as individuals and like or dislike them accordingly, but he ensures that even the “good” ones never stop being wild, brutal beasts. I found them utterly believable as a type of proto-human.

Next on the ladder are the black “savages”, along with Jane’s black maid. Oh dear, this is where you have to keep reminding yourself that it was the times! The maid is the traditional figure of fun – the black mammy who continued to appear in American culture well into the ‘50s, or maybe even later, so poor old Burroughs can’t be condemned too harshly. The savages – well, it’s not so much their savage lifestyle that’s the problem; many writers from Kipling to Conrad via Rider Haggard et al have depicted the indigenous African tribes just as problematically to modern eyes. It’s more the suggestion that they’re actually another link in the evolutionary chain – less intelligent, less resourceful, a lower form of life altogether than the white man.

Tarzan is the zenith of the evolutionary heap. Not only is he a perfect physical specimen of rampant manhood, but he’s so intelligent he actually manages to teach himself to read and write without ever having heard a human speak. But also his prime pedigree as an English aristocrat can’t be hidden for long…

…and so he rose, and taking the locket in his hand, stooped gravely like some courtier of old, and pressed his lips upon it where hers had rested.
….It was a stately and gallant little compliment performed with the grace and dignity of utter unconsciousness of self. It was the hall-mark of his aristocratic birth, the natural outcropping of many generations of fine breeding, an hereditary instinct of graciousness which a lifetime of uncouth and savage training and environment could not eradicate.

It goes without saying that women aren’t quite so evolved, though obviously white women outrank black women. But frankly, girls, when you have Tarzan looking out for you, how evolved do you need to be?

….Jane Porter – her lithe, young form flattened against the trunk of a great tree, her hands tight pressed against her rising and falling bosom, and her eyes wide with mingled horror, fascination, fear, and admiration – watched the primordial ape battle with the primeval man for possession of a woman – for her.
….As the great muscles of the man’s back and shoulders knotted beneath the tension of his efforts, and the huge biceps and forearm held at bay those mighty tusks, the veil of centuries of civilization and culture was swept from the blurred vision of the Baltimore girl.

The racist and sexist aspects are so overblown and unintentional that personally I found them hilarious rather than offensive. And while many aspects of the story are a bit ridiculous if you stop to analyse them too deeply, it’s so full of thrills, excitement, high love and general drama that it swept me along on a tsunami-sized wave of fun. Highly recommended!

(I reckon Rafa should play Tarzan in the next film. I shall of course be auditioning for Jane…)

….He did what no red-blooded man needs lessons in doing. He took his woman in his arms and smothered her upturned, panting lips with kisses.
….For a moment Jane Porter lay there with half-closed eyes. For a moment – the first in her young life – she knew the meaning of love.

35 thoughts on “Tarzan of the Apes by Edgar Rice Burroughs”