I’m getting a bit worried that my postman may have been abducted by aliens – there has been a distinct dearth of parcel deliveries so far this year. The result is a massive drop in the TBR – down 2 to 225! It’s worrying…

This is one I’ve wanted to read for a long time. I remember the Patty Hearst story from when it happened, when I was in my early teens. I was fascinated by it without ever fully understanding what it was all about – in fact, it may well have been that vagueness that made it so intriguing…

This was the early seventies in America, and it was against this backdrop that the kidnapping of nineteen-year-old Patty Hearst by the Symbionese Liberation Front – a rag-tag, cult-like group of political extremists and criminals – stole headlines across the world. Using new research and drawing on the formidable abilities that made The Run of His Life a global bestseller, Jeffrey Toobin uncovers the story of the kidnapping and its aftermath in vivid prose and forensic detail.

Courtesy of Serpent’s Tail via NetGalley. It feels like too long since I randomly picked a book based purely on the blurb, with no prior knowledge of either it or the author. I suspect I shall either love this or hate it – I’m hoping it’s the former!

The Blurb says: As dusk approaches, a former surgeon goes about closing up his dilapidated clinic in rural India. His day, like all his days, has been long and hard. His medical supplies arrive late if at all, the electrics in the clinic threaten to burn out at any minute, and his overseer, a corrupt government official, blackmails and extorts him. It is thankless work, but the surgeon has long given up any hope of reward in this life.

That night, as the surgeon completes his paperwork, he is visited by a family – a teacher, his heavily pregnant wife and their young son. Victims of a senseless attack, they reveal to the surgeon wounds that they could not possibly have survived.

And so the surgeon finds himself faced with a preposterous task: to mend the wounds of the dead family before sunrise so that they may return to life. But this is not the only challenge laid before the surgeon, and as the night unfolds he realises his future is tied more closely to that of the dead family than he could have imagined.

At once dustily realist and magically unreal, Night Theatre is a powerful fable about the miracles we ask of doctors, and the fine line they negotiate between life and death. 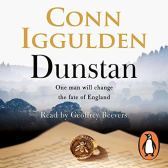 I’ve often been tempted by Conn Iggulden’s books and the subject matter of this one sounded particularly appealing. So since I had some Audible credits to use up, I gave into temptation. I’ve sneakily started listening to this already and am loving it so far – Geoffrey Beevers is doing a wonderful narration…

The Blurb says: “I have broken my vows. I have murdered innocents. I have trod down the soil over their dead face with my bare heels, and only the moon as witness. I have loved a woman and she ruined me. I have loved a king and yet I ruined him.”

The year is 937. England is a nation divided, ruled by minor kings and Viking lords. Each vies for land and power. The Wessex king Æthelstan, grandson of Alfred the Great, is readying himself to throw a spear into the north. Behind him stands Dunstan, the man who will control the destiny of the next seven kings of England and the fate of an entire nation. Welcome to the original game for the English throne.

Courtesy of HarperCollins. I don’t get many unsolicited books from publishers except for vintage crime, but this popped through my letterbox a few weeks ago, and it looks like fun. The blurb makes it sound quite dark, but the quotes on the cover and early reviews suggest there’s lots of black humour in it. I’m intrigued…

The Blurb says: Reseng was raised by cantankerous Old Raccoon in the Library of Dogs. To anyone asking, it’s just an ordinary library. To anyone in the know, it’s a hub for Seoul’s organised crime, and a place where contract killings are plotted and planned. So it’s no surprise that Reseng has grown up to become one of the best hitmen in Seoul. He takes orders from the plotters, carries out his grim duties, and comforts himself afterwards with copious quantities of beer and his two cats, Desk and Lampshade.

But after he takes pity on a target and lets her die how she chooses, he finds his every move is being watched. Is he finally about to fall victim to his own game? And why does that new female librarian at the library act so strangely? Is he looking for his enemies in all the wrong places? Could he be at the centre of a plot bigger than anything he’s ever known?

NB All blurbs and covers taken from Goodreads.