The human race has taken its first tentative steps into space and is dreaming of visiting other planets, when its plans are changed forever by the arrival of alien spaceships. The aliens seem benign, although they quickly put an end to human space travel. They also end war and animal cruelty, and usher in a utopian period where no-one goes hungry and no-one has to work if they don’t want to. Known only as the Overlords, they don’t allow the humans to see them, communicating only by voice. It seems that they allow humans to organise their own affairs, but their influence over the United Nations (gradually becoming a world government) certainly steers things in the direction they want Earth to go. All the good results of their background rule mean that humanity is happy to go along, for the most part.

But some people are aware that, without the struggle for survival and advancement, creativity is being destroyed and science is becoming moribund. So they set up a small colony, with the willing consent of the Overlords, where they hope to allow music, art and science to flourish. Still, however, no-one knows what the Overlords’ ultimate plan is – all they know is that they have promised to reveal themselves to humanity in fifty years…

This is a book I wanted to love, but found didn’t live up to my expectations. Unfortunately most of the things that disappointed me a little will take me close to spoiler territory, so forgive any vagueness caused by my attempt to avoid that. The first and major thing is that I didn’t believe for a moment that humanity would happily submit en masse to a race of aliens who told us what to do, however apparently benign their intentions. We don’t even submit to our democratically elected governments half the time! When I said that the unelected UN was turning into a world government, did you think “oh, that’s a good idea”? No, nor me. There are a few people who are against the alien rule, but they’re shown as fringe fanatics and pretty insignificant. So the fundamental premise of the book left me floundering around looking for my lost credulity before it even really got underway.

The second thing is that the hidden appearance of the aliens is made much of, and when the big reveal finally happened, it made me laugh. I’m pretty sure it wasn’t supposed to! It was clearly intended to be all metaphysical and philosophical and stuff like that, but it just struck me as kinda silly, especially when Clarke attempted to explain the relevance. I understand from my friend Wikipedia that the idea originated in an earlier short story of Clarke’s, but that, although he changed all the meaning for the book, he left in all references to a different meaning from the short story. This probably explains why I found it messy and unconvincing. Plus it was signalled so far in advance that the only surprise was that it didn’t come as a surprise. 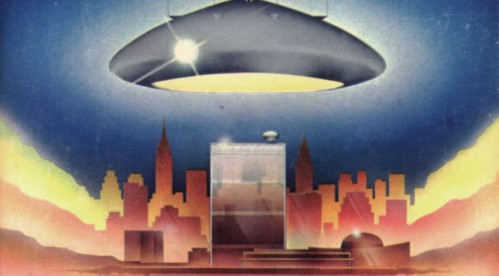 The third thing may not be Clarke’s fault – the basic storyline felt as if I’d read and watched it a million times or so before. Still avoiding spoilers as much as possible, it’s the old theme of what will the end result of evolution be, and Wells was asking that question fifty years earlier. Clarke’s answer is different to Wells’ but similar to many others since then. Now maybe Clarke was the first – the book was published in 1953 – in which case I apologise to him. But it meant I wasn’t excited by it – I found it pretty predictable and it therefore felt as if it took an awful long time getting there.

On the upside, it’s well written and the ending is left ambiguous, which makes it thought-provoking. With all of these how-will-humanity-end-up stories, the question has to be if it’s a future we would seek, or seek to avoid. Often authors tell us – the future is either utopian or dystopian; it’s decided for us in advance. Here that question is open, allowing the reader to use her own imagination to, effectively, write the sequel. I feel many sci-fi shows, films and books may have been trying to write that sequel for years, consciously or subconsciously. And, indeed, it’s a theme Clarke returned to himself in the later 2001: A Space Odyssey. It was after reading Childhood’s End that Stanley Kubrick invited Clarke to collaborate with him on the project that would eventually result in the book and film of Space Odyssey, and together they created a much better and more internally coherent story, in my opinion, while retaining that ambiguity which lifts this one above the average, despite my criticisms of it.

Overall, then, it didn’t wow me as much as I’d hoped, but I’m still glad to have read it, partly because it’s considered a classic in its own right, and partly because I was intrigued to read the book that inspired Kubrick. The fact that Kubrick, who at that time was reading science fiction voraciously looking for inspiration, found the ideas original suggests to me that a major part of my disappointment comes from reading the book too late, after years of reading and watching other people creating variations on the theme.