I’ve been so busy this year trying to catch up with my Classics Club list and various other challenges that I’ve read far fewer new releases than usual, but being a bit choosier means that I’ve enjoyed most of those I have read. As a result, the shortlisting has been extremely tough. In the end, I’ve decided not to include classics or any of the fiction I read as part of my Russian challenge since I’ve already posted about them in previous challenge summaries. All of which very neatly leaves me with five excellent contenders, so here goes…

As Hope Clearwater sits on the beach outside her home in the Republic of the Congo, she looks back over the circumstances of her life that have brought her here: her marriage to mathematician John Clearwater, and her later work at Grosso Arvore, a chimpanzee research project run by the world-famous primate expert, Eugene Mallabar. The two stories, though separate, have the common theme of the pursuit of scientific fame and the toll that can take on those who fail. There are other themes too – the war that rumbles on in the Congo, the evolutionary and genetic links between human and chimp – and a third story, of Hope’s love affair with Usman Shoukry, an Egyptian mercenary pilot fighting on the pro-government side in the war

This is Boyd at his best and the narration by Harriet Walter does it full justice. The book sprawls across time and geographic location, bringing each to life and never allowing the reader to become lost. Each separate strand is interesting and engrossing and they are well enough linked that they feel like a satisfying whole. The writing and storytelling are of course excellent – when is Boyd ever anything less? It feels perfectly balanced, a story about chimps that has much to say about humanity, and says it beautifully.

That Summer in Puglia by Valeria Vescina

When a PI tracks Tommaso down in London to give him the news that he has been left a large legacy, Tommaso tells him he doesn’t want it. To make the PI understand why his anonymity is so important to him, Tommaso agrees to tell him the story of why he left Italy – the story of his last summer in Puglia. That was the summer, long ago, when Tommaso met and fell in love with Anna. We know from the beginning that their relationship ended with some kind of tragedy that led Tommaso to cut all ties with home and take on a new identity in London. But it’s only after we follow Tommaso through the events of the summer that we find out what happened…

On the face of it, this is a straightforward account of a love affair, but the quality of the writing, the great pacing and, most of all, the superb sense of place make it so much more than that. It’s an intense character study of Tommaso, and it’s wonderfully evocative of the culture of Puglia, in the heel of Italy, in the 1980s – still strictly conservative in outlook, still largely in thrall to Catholicism, and with strong family expectations that children will follow the paths determined for them by their parents. A first-class début.

Eagle and Crane by Suzanne Rindell

Earl Shaw takes two small planes barnstorming round Depression-era California, tempting customers to go up for a scenic flight. One day, the pilots take up two young men, Louis Thorn and Harry Yamada. Daredevil Harry decides he will walk along the wing, and Louis, feeling challenged and a little humiliated, follows suit. Earl offers them both jobs as aerial stuntmen and so the act of Eagle & Crane is born – Eagle to represent the good ol’ US of A, and Crane to represent the villainous and untrustworthy Japs of Harry’s heritage. But the war is about to begin, and suddenly white America will begin to see its Japanese-heritage fellow citizens as more than a comic-book threat. And Harry and Louis will find their friendship altered and strained…

While the book has some elements of the thriller, it definitely falls far more into the category of literary fiction for me. Rindell’s research is skilfully fed to us through the development of her characters and her story, so that we gradually get a real feel for rural Californian life and attitudes in this period, and an in-depth look at the impact of the internment of Japanese-Americans. This third book cements her place as one of my favourite authors.

Springtime in a Broken Mirror by Mario Benedetti

Santiago is a political prisoner in Montevideo, Uruguay, in the 1970s. His family and friends are scattered, exiled from the country they call home. As Santiago sits in jail not knowing when – if – he’ll be released, he writes letters full of love to his wife, Graciela. For him, life is static, his memories of their love the thing that has sustained him through the torture and now the sheer stultification of his imprisonment. But for Graciela, life is a moving thing – she is still young, in a new city, with a job and a growing child, and for her the present is more vivid than the past. She finds herself increasingly attracted to Ronaldo, but knows that Santiago needs her love and loyalty. The crux of the story is deceptively simple – what will Graciela decide to do?

This is one of the most beautifully written books I’ve read in a long time, and credit must go to the translator, Nick Caistor, who has done a marvellous job. Although it’s based around the revolutions of South America, it is not about politics as such; rather, it is about the impact that political upheaval has on the individuals caught up in it. It’s about home and exile, loneliness, longing, belonging. It’s about loyalty and love, and hope, and sometimes despair. It’s profoundly moving – full of emotional truth. Wonderful!

This was an extremely difficult decision and I swayed back and forwards between Tombland and Springtime in a Broken Mirror several times, but in the end my love for the wonderful Matthew Shardlake won out…

It’s 1549, and young King Edward VI is on the throne. Since he is still a child, his guardians have appointed a Protector to rule in his stead, his uncle Edward Seymour. There is great poverty in the towns and cities while, in the farming lands of the north and west, landlords are enclosing common land for their own sheep, fermenting unrest amongst the smallholders and tenant farmers who relied on that land to eke out their own precarious living. Throw in the usual religious turmoil and an unpopular and unwinnable war against those pesky Scots, and the time is ripe for rebellion. It’s at this moment that Shardlake is summoned by Princess Elizabeth to investigate a murder of which one of her distant Boleyn relatives stands accused. And so he must head for Norwich, a city that will soon be at the heart of the East Anglian rebellion, led by the charismatic Robert Kett…

This is another completely satisfying addition to the series, confirming again my belief that Sansom is the best historical fiction writer certainly today and perhaps ever. He tells his story in a straightforward linear way, creating a great historical setting founded on in-depth research, a strong plot, and a group of brilliantly depicted characters who have all the complexity of real, flawed humanity. Shardlake himself continues to be one of the most appealing characters in fiction – irascible, often lonely, occasionally a little self-pitying, but intelligent, determined, dedicated, charitable and wholeheartedly loyal to those he takes into his generous heart. Superb!

the nominees for the Book of the Year Award are…

FICTIONFAN BOOK OF THE YEAR 2018 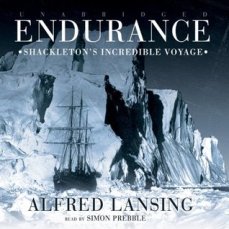 Five excellent contenders, but no hesitation in my mind as which deserves to win. This is a straightforward, factual telling of the story of Ernest Shackleton and his crew, and their failed 1914 bid to cross the Antarctic on foot from west to east. It’s also one of the most stirring and emotionally turbulent books I’ve ever read.

Then, at just about two o’clock, they saw where they were. A quirk of wind tore the clouds apart, and two wicked peaks loomed above a line of cliffs and the perpendicular faces of glaciers that dropped sheer into the sea. The coastline looked to be about a mile away, perhaps a little more. But vastly more important, in that single glimpse, they saw to their terror that they were only a short distance outside the line of breakers, the point at which the seas ceased to behave like swells and became combers instead, rushing faster and faster towards their own destruction against the land. As each swell passed under them, they could feel it tugging momentarily at the boat, trying to get hold of her and hurl her toward the beach. It seemed now that everything, the wind, the current and even the sea itself, were united in a single determined purpose, once and for all to annihilate this tiny boat which thus far had defied all their efforts to destroy it.

A wonderfully emotive journey that shows the human spirit at its very best. First published in 1959, this fully earns its reputation as a classic of non-fiction writing.

Thanks to all of you who’ve joined me for this year’s awards feature.