I’m still struggling with the obsession with identikit so-called psychological thrillers that is dominating modern crime fiction at the moment, so have read fewer books in this category this year than every before in my adult life, I think. I can’t help thinking that the astonishing rise in popularity of vintage crime over the last few years suggests I’m not alone in this. However, happily I’ve still managed to find a few great reads, none of which have the ubiquitous and terminally unoriginal woman in red/yellow coat on the cover, you’ll note…

The Death of Mrs Westaway by Ruth Ware

Hal (Harriet) Westaway is struggling to keep her head above water. The bills keep pouring in and in these winter months she doesn’t get enough custom at her kiosk on Brighton’s West Pier to pay them all. Things are reaching a crisis. So when she receives a letter from a solicitor informing her that she has been left a legacy by her grandmother it seems like the answer to a prayer. There’s only one problem – Hal knows there’s been a mistake. Her real grandmother died years ago…

All I ask for in crime fiction is a good story well told; some characters I can like, hate, worry about, mistrust; enough uncertainty about how it will play out to keep me turning pages; a minimum of unnecessary padding; and told in the past tense, preferably third person. And that’s exactly what Ruth Ware has given me in this hugely enjoyable thriller. Add in a dark and dusty old house full of attics and cellars and narrow little staircases, the shade of a wicked old woman who tyrannised over her family, a bunch of squabbling siblings, and a scary old housekeeper who knows more than she’s telling, and I’m pretty much in modern-Gothic heaven!

DCI Karen Pirie of Police Scotland’s Historic Cases Unit is in the middle of re-investigating a series of rapes when she is diverted to a crime scene in the Highlands. A woman and her husband are on a kind of treasure hunt, looking for something that the woman’s grandfather buried in a peat bog long ago. They find the spot, but when they dig down into the peat, they are shocked to discover not only the looted items but the body of a man, almost perfectly preserved…

Now that a national police force has taken the place of the old regional forces in Scotland in real life, it gives fiction writers the ability to have their detectives travel all over the country, and McDermid is as comfortable writing about the Highlands as she is her hometown of Edinburgh. She gives an amazingly good sense of place and a wholly authentic feel to contemporary Scottish life and to a professional police force where dysfunctional drunken mavericks wouldn’t be tolerated. The fifth book in the Karen Pirie series and an excellent addition.

A man escapes from a secure psychiatric hospital to find his little son, sweet William, and run off to a new life, just the two of them, in the south of France. This is the story of the next forty-eight hours…

And what a story! A complete roller-coaster during most of which we’re stuck inside the head of Orrey, the father, whose frequent assertions that he’s not mad somehow fail to convince us! Dark and disturbing doesn’t even begin to describe it. By all rights, I should have hated it – I’ve bored on often enough about my dislike of using children to up the tension in crime fiction. But it’s a tour de force piece of writing with one of the most brilliantly drawn disturbed central characters I’ve read in a long time – think Mr Heming or The Dinner or Zoran Drvenkar. Then add in relentless pacing that drives the book forward at a speed to leave you gasping – the definitive page-turner!

Smoke and Ashes by Abir Mukherjee

Roused from a drug-addled stupor in an opium den in the backstreets of Calcutta, Sam Wyndham, Captain in the Calcutta police, discovers the place is being raided. Discovery of his addiction will finish his career so he flees, only to stumble across the body of a horribly mutilated Chinaman. Or did he? Next day, when no report of the murder comes in, Sam is left wondering if he hallucinated the whole thing. That is, until he is called out to another murder, where the body has been mutilated in exactly the same way…

This series goes from strength to strength with each new instalment – this is the third. Set in the early 1920s, the dying days of the Raj when the Indian Independence movement was well under way, Mukherjee always manages to work the political situation into his stories without allowing it to overwhelm them or feeling like a history lesson. As always, though, the plot is founded much more on human nature than on politics. I feel this is his strongest plot so far, which takes us into some dark episodes in the dealings between the Raj and their subjects. There’s a good deal of moral ambiguity in there, and some excellently complex characterisation to carry it off. And it all builds to a first-rate, entirely credible thriller finale that I found fully satisfying.

The Accident on the A35 by Graeme Macrae Burnet 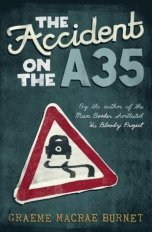 Since I couldn’t find a single thing to criticise about this book, it was the only possible choice to be this year’s winner.

When Bertrand Barthelme runs his car off the A35 into a tree one evening and dies, Inspector Georges Gorski has no reason to think it was anything other than an unfortunate accident. But Barthelme’s widow thinks there’s something odd about her husband having been at that spot at that time and asks Gorski to look into it a bit more. Mme Barthelme is an attractive 40-something with more than a touch of the femme fatale in this first meeting, so Gorski finds himself agreeing. Meantime, Barthelme’s 17-year-old son Raymond starts a kind of investigation of his own, in an attempt to learn more about the father with whom he had always had a rather cold, distant relationship. Both investigations will head off in unexpected directions.

This is on the face of it a crime novel, but the quality of the writing, the depth of the characterisation, the creation of place and time and the intelligence of the game the author plays with the reader all raise it so that it sits easily into the literary fiction category, in my opinion at the highest level. The setting – the small town of Saint-Louis, in the corner of France that borders Germany and Switzerland, some time in the 1970s – is brilliantly drawn, but it’s the human characters who make it such an absorbing story.  Not a word is wasted – with the briefest of descriptions, Burnet can create a person who feels real, solid, entire, as if they might be a neighbour we’ve known all our life. I loved every lean and beautifully placed word of this slim book, and was wholly absorbed from beginning to end. Superb!