This has been another fab year for vintage crime fiction with both the British Library Crime Classics and the Collins Crime Club working hard to keep me entertained with some of my most enjoyable reads of the year, not to mention my slowly ongoing Murder, Mystery, Mayhem Challenge.

Fire in the Thatch by ECR Lorac

The Second World War is drawing to a close when the tenancy of a piece of land complete with thatched cottage falls vacant on the estate of Colonel St Cyres, in Devon. The Colonel is determined the lease shall go to someone who shares his love of the land and who wants to work it productively. However, his daughter-in-law June has different ideas. A Londoner by birth and a party-girl by nature, June is staying with her father-in-law because her husband, the Colonel’s son, is a prisoner of war in Burma. She wants the Colonel to give the cottage to a “friend” of hers, a Mr Gressingham, who would use it as a place to entertain his (and June’s) rather decadent London friends. Fast forward a few months, and Inspector MacDonald of the Yard is on his way to investigate what might have been a case of accidental death, or possibly one of arson and murder…

Lorac’s writing is excellent and the picture she creates of rural England during the war years is totally convincing. Inspector MacDonald is an appealing detective – a thoughtful and kindly man, strictly moral on his own account but with the capacity to make some allowance for moral weakness in others. Although convoluted, the plot is firmly grounded in human nature, giving it a timeless quality. Lorac and MacDonald deserve their return to the limelight!

The Eye of Osiris by R. Austin Freeman

One November day in 1902, John Bellingham disappears from the study of a friend’s house where he had been waiting for his friend to return home. Two years later, there has still been no sign of him and his potential heirs are left in limbo, unable to execute his rather strange will. And then pieces of a dismembered skeleton begin to show up in odd places. Meantime, young Dr Paul Berkeley, our narrator, has fallen in love with Ruth Bellingham, the missing man’s niece, whose father is one of the potential heirs. He persuades Ruth’s father, Godfrey Bellingham, to allow Dr John Thorndyke, an expert in medical jurisprudence, to look into the case. It’s up to Thorndyke to find a way to identify the remains and to find out what was behind Bellingham’s disappearance.

The prose is elegant, reminding me of Conan Doyle’s easy style, and the wit in Berkeley’s observations of the other characters made me chuckle aloud several times. And I adored the romance! Ruth feels remarkably modern considering the book was written in 1911 – humorous and intelligent, strong and self-reliant. A thoroughly entertaining read!

It’s the early 1930s. Britain’s finances haven’t yet recovered from the Great War and now the Stock Market collapse has brought matters close to crisis. So the Home Secretary has invited an American financier to a private dinner at the House of Commons to schmooze him into agreeing to make the government a substantial loan. But when the Division Bell sounds, the Home Secretary has to leave the room to go and vote. The Home Secretary’s Parliamentary Private Secretary, young Robert West, is also hurrying along the corridor to vote, but as he passes the room where the financier waits alone, he hears a shot. Rushing in with the other people in the corridor, he finds the financier dead! Who killed him? And why? Robert finds himself working as a liaison with the police to find the answers…

This is a lot of fun, with two likeable lead characters in Robert and Grace, a feisty young Socialist MP based on the author herself, who wrote the book during a temporary halt in her own Parliamentary career. The plot is a bit messy perhaps, but that’s more than compensated for by the humour and especially the enjoyable insider look at all the quirky traditions that surround parliamentary procedures. Great fun!

The Mystery of the Yellow Room by Gaston Leroux

Mademoiselle Mathilde Stangerson is attacked in her yellow bedroom by a murderer wielding a mutton-bone. When her father and the other people in the house break down the door, Mlle S is on the floor and her murderer is nowhere to be found. How did the murderer get out of a room in which the only door and window were securely locked? Enter our hero, Joseph Rouletabille, a young journalist who at the age of eighteen has already acquired a reputation as an inspired amateur detective.

A classic ‘locked room’ mystery with another ‘impossible crime’ thrown in for good measure, this is a fabulous little romp that is more and more fun as it goes along. Hercule Poirot himself described it as a masterpiece, and who am I to disagree? Essential reading for vintage crime fans and so nearly the winner… 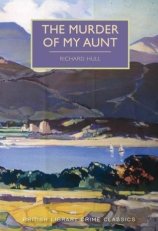 The Murder of My Aunt by Richard Hull

Good though the shorlisted books are, the decision was an easy one. The Murder of My Aunt entertained me as much as any book I’ve read this year.

Edward Powell is an unhappy young man. He lives with his annoying Aunt Mildred who, as his guardian and trustee of his inheritance, holds the purse-strings, rather too tightly in Edward’s opinion. To make matters worse, he’s forced to live in the family home in a small village in Wales, surrounded by landscape and hills and sheep and all that awful stuff, when he should be mingling with artists and bright young things in one of the fashionable hotspots of the world. Really it’s too much to bear. So he decides there’s only one thing to be done… the clue is in the title!

Edward’s voice is what makes the book so special. The writing is fantastic, so that Hull manages to let the reader see both the truth and Edward’s unreliable interpretation of it simultaneously. One couldn’t possibly like Edward, and in real life one would pretty quickly want to hit him over the head with a brick, but his journal is a joy to read. It’s a brilliant portrait of a man obsessed with his own comforts, utterly selfish, and not nearly as clever as he thinks he is. An expert example of how to make an unlikeable character work, and full of wicked humour – brilliant!