Well, during my two-week break (did you miss me? You better have…), I’ve been reading up a storm, most of it horror or Gothic or otherwise packed with spookifulliness. So you will need to take safety precautions before visiting my blog over the next couple of weeks – it would be awful if your eyes started from their spheres and your hair stood on end like quills upon the Fretful Porpentine.

(Poor porpy – he keeps looking at his hibernation box longingly, but I’ve told him he’s got a long way to go yet…)

My advice is – take precautionary chocolate at least three times daily for the next month. This can be in the form of truffles, hot chocolate or fudge cake – the choice is yours. But keep some 80% plain chocolate aside for emergency top-ups as required.

To start the ball rolling (is it a ball? Or is it in fact the head of the headless ghost??), I thought I’d join in with the Classic Club’s…

1. Which classic story has scared you the most?

Truthfully I rarely find books can maintain scariness for more than odd moments – I think short stories are much more effective. So I’m going with The Monkey’s Paw by WW Jacobs – a story that sends chills down my spine every time I think of it. If you want to be terrified this Hallowe’en, here’s a link… 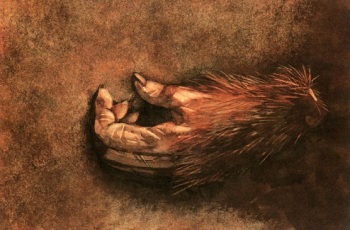 2. Scariest moment in a book?

That would be the moment in The Haunting of Hill House by Shirley Jackson, when Eleanor realises the hand she has been clutching for comfort doesn’t belong to whom she thought it did…

“God God,” Eleanor said, flinging herself out of bed and across the room to stand shuddering in a corner, “God God – whose hand was I holding?”

3. Classic villain that you love to hate?

Sauron. There are so many great villains in The Lord of the Rings by JRR Tolkien, in fact – Denethor and Saruman are up there amongst my most hated too, but Sauron wins because he’s not really in the book in person – he simply broods over it like a malignant dark cloud of supernatural terror…

4. Creepiest setting in a story?

Then we lay panting and laughing after our exertions on the hot yellow sand, sheltered from the wind, and in the full blaze of a scorching sun, a cloudless blue sky above, and an immense army of dancing, shouting willow bushes, closing in from all sides, shining with spray and clapping their thousand little hands as though to applaud the success of our efforts.

6. Book you’re too scared to read?

Nope! Can’t think of one! There are loads I won’t read because the subject matter sounds too gory or graphic, but that’s not a matter of fear, simply of good taste… 😉😎

7. Spookiest creature in a story?

Thrawn Janet – if you can cope with the Scots language in Robert Louis Stevenson’s great story, then this tale of a woman who has become the victim in the fight between good and evil and may now be the Devil’s pawn is wonderfully chilling. The image of her tramp-trampin’ and croonin’ lives with me…

Syne she turned round, an’ shawed her face; Mr Soulis had the same cauld grue as twice that day afore, an’ it was borne in upon him what folk said, that Janet was deid lang syne, an’ this was a bogle in her clay-cauld flesh. He drew back a pickle and he scanned her narrowly. She was tramp-trampin’ in the cla’es, croonin’ to hersel’; and eh! Gude guide us, but it was a fearsome face.

8. Classic story that haunts you to this day?

Up and down went the heavy axe, splitting and tearing at the tree. Off came the peeling bark, the great white strips of underwood, raw and stringy. Hack at it, blast at it, gouge at the tough tissue, throw the axe away, claw at the rubbery flesh with the bare hands. Not far enough yet, go on, go on.

Meg’s heroic exploit in Tam o’Shanter – Robert Burns plays it mainly for laughs in his classic ghostly poem, but there’s some wonderful horror imagery in there too, and I love that the brave horse Meg/Maggie wins the day, though making a great sacrifice as she does…

For Nannie, far before the rest,
Hard upon noble Maggie prest,
And flew at Tam wi’ furious ettle;
But little wist she Maggie’s mettle!
Ae spring brought off her master hale,
But left behind her ain grey tail:
The carlin claught her by the rump,
And left poor Maggie scarce a stump. 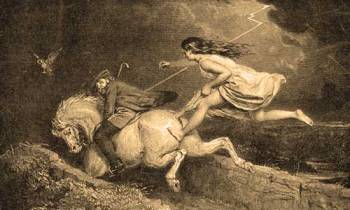 Berenice by Edgar Allan Poe. I suspect Poe must have been having toothache on the day he wrote this horrible little story…

The eyes were lifeless, and lustreless, and seemingly pupilless, and I shrank involuntarily from their glassy stare to he contemplation of the thin and shrunken lips. They parted; and in a smile of peculiar meaning, the teeth of the changed Berenice disclosed themselves slowly to my view. Would to God that I had never beheld them, or that, having done so, I had died!

11. Character death that disturbed/upset you the most?

I’m not going to name the character because that would be a major spoiler, but I will say the death at the end of Agatha Christie’s The Last Séance in her The Hound of Death collection has lingered in the scaredycat portion of my mind for the best part of half a century now, and shows no signs of going away…

The curtains of the alcove seemed to have been pulled back a little, the medium’s figure was just visible through the opening, her head fallen forward on her breast. Suddenly Madame Exe drew in her breath sharply. A ribbon-like stream of mist was issuing from the medium’s mouth. It condensed and began gradually to assume a shape, the shape of a little child.

A Christmas Carol
We Have Always Lived in the Castle
Frankenstein: or, The Modern Prometheus
The Island of Dr Moreau
The Strange Case of Dr Jekyll and Mr Hyde

….“Oh, Man, look here! Look, look, down here!” exclaimed the Ghost.
….They were a boy and a girl. Yellow, meagre, ragged, scowling, wolfish; but prostrate, too, in their humility. Where graceful youth should have filled their features out, and touched them with its freshest tints, a stale and shrivelled hand, like that of age, had pinched, and twisted them, and pulled them into shreds. Where angels might have sat enthroned, devils lurked, and glared out menacing. No change, no degradation, no perversion of humanity, in any grade, through all the mysteries of wonderful creation, has monsters half so horrible and dread.
….Scrooge started back, appalled. Having them shown to him in this way, he tried to say they were fine children, but the words choked themselves, rather than be parties to a lie of such enormous magnitude.
….“Spirit, are they yours?” Scrooge could say no more.
….“They are Man’s,” said the Spirit, looking down upon them. “And they cling to me, appealing from their fathers. This boy is Ignorance. This girl is Want. Beware them both, and all of their degree, but most of all beware this boy, for on his brow I see that written which is Doom, unless the writing be erased.”

From A Christmas Carol by Charles Dickens

55 thoughts on “The Gothic Book Tag”