Save me from the exceptional… 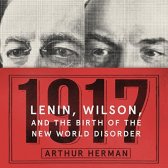 In 1917, the USA finally entered World War I after years of pusillanimous dithering, and Russia threw its revolution after years of poverty and imperialist wars. In this book, Herman looks at the two men who led those events, Woodrow Wilson and Vladimir Lenin, and suggests that out of their respective philosophies of power grew the 20th century and all of its horrors.

Normally, when reviewing a major history book, I find that even though I might not like the style or may feel the author hasn’t entirely convinced me with his or her arguments, I still feel at the end that I have gained enough from reading it to have made it worthwhile. Sadly, this is the exception. I have thoroughly enjoyed each of Arthur Herman’s books which I’ve read to date, so fully anticipated that this would be a great book to finish my Reading the Russian Revolution challenge. Herman is often biased, but usually openly, so that I feel the reader can allow for his bias in forming her own judgements. Here, however, his bias seeps into every analysis he makes and it seems as if he’s perhaps not even aware of it. American capitalism is good, Russian communism is bad. Wilson is an idealist, Lenin is a cynic. America is a shining beacon on the hill, the USSR is a blot on the escutcheon of history. I realise these are standard viewpoints on the other side of the Atlantic, and some parts of them would be accepted over here too, though perhaps less so after the last couple of years. But a history book with this level of bias teaches nothing, except perhaps that history should never be written by those with a dogmatic belief in the superiority of one particular nation or form of government.

It’s not that Herman is uncritical of Wilson and America – in fact, sometimes he’s almost sneeringly contemptuous of Wilson. It’s more in the language he uses. Some of his statements are simplistic and unnuanced in the extreme, and his facts are carefully selected to support his basic argument that both Wilson and Lenin were more interested in forcing their worldview on the rest of the world than in acting in their own nations’ self-interest. He speaks of “American exceptionalism” with a straight face, clearly believing the propaganda which has done so much damage in convincing so many Americans (but not many other people) that they are somehow intrinsically superior to other races, nations, etc. And yet this is exactly the kind of propaganda he condemns in his despised USSR. His conclusion, broadly summarised, is that everything bad in the 20th century comes from Russia, while America could have done better in the world, but did pretty well. An arguable stance, and I’d have appreciated an argument about it rather than it being presented as if it were an indisputable statement of fact.

Please don’t think I’m an apologist for the extreme communism of the USSR, nor the horrors carried out in its name. But nor am I an apologist for the extreme capitalism of the USA, complete with its own murky history of horrors. Unfortunately Mr Herman is, and appears to believe that America must stay engaged with the world to save it by exporting its form of capitalism to the rest of us. Personally, I think the world needs to be saved from all nations who think they have the right to force their views on other people and from all extremists who believe they are “exceptional” in any way. I find it difficult to recommend this one – the overwhelming weight of bias prevents it from adding any real insight into the subject.

PS Yes, I’m aware my own biases show here, but I’m not writing a history book. Nor am I advocating that the world should submit to the exceptional superiority of Scotland.

31 thoughts on “1917: Lenin, Wilson, and the Birth of the New World Disorder by Arthur Herman”

Leave a Reply to Grab the Lapels Cancel reply