This is now the third post I’ve written about this book, though the other two will remain unpublished. The problem is that as soon as I start writing about the portrayal of the black characters, I feel I’ll be offending the many, many Americans who consider this a great novel. Clearly, American attitudes to race are quite different to mine, reflective of our different histories; and slaves and their descendants being depicted as devoted domestic pets seems to be a theme that runs through a great deal of American fiction hailed as “great”, even sometimes incomprehensibly (to me) cited as anti-racist. I doubt a smugly superior lecture from me will change anything, so why even try to explain just how distasteful I find it, in this, in Huckleberry Finn, yes, even to a much lesser degree in Mockingbird. It’s not as if we don’t have our own problems with racism here in the UK, albeit of a different style, and some of our own classic literature makes me feel equally queasy.

With unerring African instinct, the negroes had all discovered that Gerald had a loud bark and no bite at all, and they took shameless advantage of him.

It isn’t just the portrayal of race that led me to abandon the book at 15%, however. I bored rapidly with the endless, vapid descriptions of dresses and waist-sizes. Interesting once – not interesting after the first twenty times. I thought at one point I might actually escape from Scarlett’s tedious wardrobe to go to war with the men, but sadly not. A couple of paragraphs dispensed with a year of history, and back we were, trying on widows’ frocks.

The air was always thick with threats of selling slaves south and of direful whippings, but there had never been a slave sold from Tara and only one whipping, and that administered for not grooming down Gerald’s pet horse after a long day’s hunting. 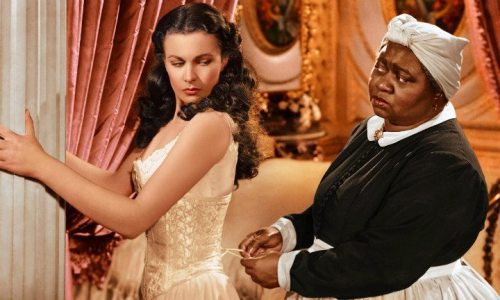 (Am I alone in wishing Mammy had keep tightening till Scarlett croaked?)

I find it quite incomprehensible that this book is still rated as highly as it is. I admit I loved the film when I watched it nearly half a century ago, but times change, and the attitudes expressed in the book (by the author, not just by the characters) make it feel horribly outdated now. Even putting the race question to one side, though, I found the writing unremarkable, the characterisation shallow of the main characters and non-existent of the others, the over-padded length tedious, and the concentration on frocks and dances a total trivialisation of a subject that deserves so much more. Maybe the other 85% is brilliant, but I’m not willing to waste any more of my time on the off-chance. I’d rather be reading Toni Morrison. Heck, I’d rather be reading William Faulkner!!!

Prissy had never been more than a mile away from Twelve Oaks or Tara before, and the trip on the train plus her elevation to nurse was almost more than the brain in her little black skull could bear.

Since obviously this will not be achieving Great American Novel status in my quest, and given that it’s the latest in a lengthening line of GAN contenders that have left me with a bad taste, I’ve decided to ban all other books about slavery and race written by white Americans prior to, say, 1950 from my TBR. Goodbye, Uncle Tom! I fear that re-read will never happen now. I shall leave you decently buried in the long-ago, where I wish I’d left Gone with the Wind. Sadly my love affair with Rhett and Scarlett is officially over…

90 thoughts on “Gone with the Wind by Margaret Mitchell”