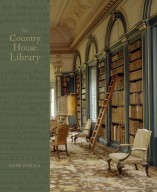 This beautifully produced and gorgeously, lavishly illustrated publication is far more than a coffee table book. It’s a comprehensive history of British bookishness from its beginning to the present day. The main thrust of it covers the 17th to 19th centuries – the period when the country house came into its own and wealthy people saw Libraries as an essential feature of their homes. Mark Purcell looks at both the books and the rooms they were stored in, and differentiates between them by calling the book collections ‘libraries’ with a small ‘l’ and the rooms ‘Libraries’ with a capital ‘L’, and I’m going to stick with that for this review.

There’s so much in the book that I’ll only be able to give a flavour of it. Purcell has clearly had a ball prying into the bookshelves and book catalogues of centuries’ worth of bibliophiles, and his enthusiasm is matched by deep knowledge, backed up with an immense amount of research. This results in a phenomenal amount of detail, which in the early chapters overwhelmed me a little and made the reading heavy going. Purcell doesn’t simplify by explaining bookish vocabulary which may be unfamiliar to the general reader (like me!), so at first I found myself doing a bit of googling.

But I found that I gradually became fascinated, especially when I realised that the bookshelves of the rich – who, of course, were also the powerful – cast an interesting sidelight on many famous historical personages and the societies in which they lived. Because Purcell tells us as much about the storage of books as the books themselves, it also becomes an architectural history, and a history of the lifestyles, interests and leisure pursuits of these people – an aspect often not covered in standard histories which tend to be concentrated on politics and power.

Purcell follows a fairly linear timeline throughout. He starts with the speculation that the tradition of libraries in Britain began in Roman villas, with scrolls, and discusses in depth what kind of books would have been read. In the next few chapters, he covers the period up to and through medieval times, showing that there was a considerable level of scholarship amongst the nobility. He also discusses how books were stored before Libraries became a feature – in chests or flat on shelves in small studies or closets set aside purely for the purpose of reading and study. Not unnaturally, the main focus is on the English since they comprise by far the largest population, but happily he ranges out to Scotland, Ireland and Wales too throughout the book, which I found tended to bring together the histories of those nations, showing a common Britishness that often doesn’t come through in histories or biographies of a particular subject.

He then goes on to discuss the foundations (and fates) of the great libraries of the late 17th and 18th centuries, some of which would later form the basis of many of our great national and public collections today (and some of America’s and even Australia’s too). By now, some of the collectors were including lighter, more entertaining books amongst the great classics and heavy religious texts – novels, but also lots of informative books, like cookery books, books on animal husbandry, etc. English was by now more common than Latin and Greek, and books in modern languages were beginning to appear on the shelves of the well-travelled. Illustrated books of things like foreign flora and fauna made me feel that this illustrated book is part of a long tradition, and while wikipedia and Google are fabulous alternatives for those of us with modest homes, I lusted for the libraries of the 19th century in particular.

I also lusted for their Libraries! From the illustrations, the earliest ones look rather bare and functional – huge half-empty rooms surrounded by shelving. But by the 19th century, Libraries had become living spaces where people spent part of their leisure time. Railways had allowed for the tradition of the weekend house party to begin, and Libraries were becoming part of the attractions of the country house, sometimes even including billiard tables, or being situated next door to the billiard room. Comfy seats appear – and footstools, card tables, open fires and reading lamps. The nouveau riche in particular went for comfort and novels, and I found myself longing to either be a nouveau riche 19th or early 20th century country house owner, or at the very least to be invited to one of their house parties. Another place to be added to my ‘where to go when they invent a time machine’ list.

In the major houses, books regularly outgrew the space in the main Library, (don’t we all recognise that problem!), so that other rooms would gradually be co-opted into use as secondary Libraries. Purcell shows that many of the householders provided books and even occasionally specific Libraries for their servants, and some of the libraries gradually began to operate almost like public lending libraries for people in the surrounding countryside.

Purcell finishes by discussing the 20th century, when many of these libraries were sold off or donated, sometimes as a method of paying off swingeing inheritance taxes. He himself works with the National Trust, the body that has taken over responsibility for maintaining many of these great country houses on behalf of the nation, and he tells how they’ve gradually realised the bookish treasures they’ve acquired along with the houses. A sad and also happy end – the passing of a great tradition, but hopefully these rooms and books will be maintained and made available to scholars and the public for years to come, even if we’re not allowed to actually read them.

As you can hopefully tell, I loved this – it might have been heavy going in places, but I learned lots about a subject dear to my bookish heart. And those illustrations are to die for…

NB This book was provided for review by the publisher, Yale University Press.

59 thoughts on “The Country House Library by Mark Purcell”