Kumar begins this wide-ranging review of past empires by speculating why interest in empires seems to be growing again. He suggests that firstly, enough time has passed to allow the more recent ones to be assessed more objectively. But secondly, issues such as globalisation and climate change are causing people to question what is the best way to govern – is the nation state really the answer that it seemed to be when the age of empires ground to a halt? Kumar doesn’t directly set out to answer this question. Instead, he looks at five of the most significant recent empires, considering how they were ruled, what were the objectives of the rulers, and what effect being the “load-bearing” part of an empire had on the national spirit of the ruling nations. He also considers the idea that, since most nations are a kind of empire, having won their territory out from an original centre, then perhaps the converse is also true – that empires can seen be seen as a form of nation.

Before he looks at the five recent empires, Kumar starts with a short chapter on Rome, on the grounds that all the later empires were to some degree influenced by its aims and methods of governance. He discusses the importance of citizenship and the use of religion – in Rome’s case, Christianity – to homogenise the different peoples that came under its sway. These are themes he returns to in each of his five chosen empires, showing how they mirrored or differed from Rome in these aspects. 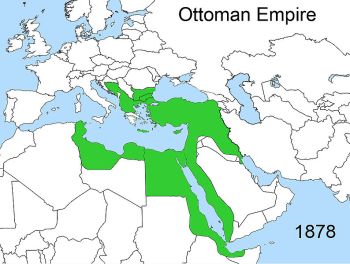 The five main empires covered in the book are the Ottoman, the Habsburg, the Russian (later USSR), the British and the French. In each case he starts with a run through of their development and spread – which territories they colonised. These were the least interesting parts for me, and I felt a real need for more and better maps than the book provides. After that, however, I found each chapter became more interesting as Kumar began to look at the methods of rule each empire put into place, showing how this usually arose out of the way the empire developed. So he draws a distinction between those empires which were basically land empires, such as the Russian, with all territories spreading out contiguously from a centre, and overseas empires like the British. 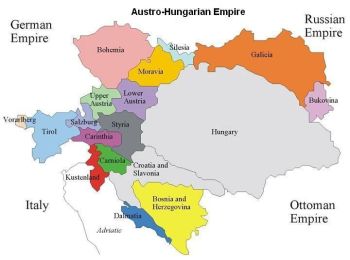 In each case, he then looks at what the rulers saw as the purpose of their empire. Obviously, for some, a major purpose was to do with generating wealth, but beyond that Kumar looks at, for example, the Spanish mission to protect and spread Catholicism, or the French desire to spread their Enlightenment ideals to the territories they controlled. He takes a rather positive view, suggesting many subject territories felt a considerable loyalty to their empire, citing many examples of where they willingly fought in the wars of the central nations. This is a book about rulers, so there’s not much here about how the ‘ordinary’ people may have felt about empire, but certainly he makes a good case for the benefits that often accrued both to the central nations and the subject territories, in terms of both economic and cultural trade.

In his concluding chapter, Kumar looks at the difficulties the central nations have had in rediscovering their own identities following the collapse of their empires. He also discusses neocolonialism and the empire-like status of the superpowers – America, China, and the EU, which he suggests some see as the Habsburg empire resuscitated. And finally he discusses the growth of supranational bodies which take on some of the aspects of empire – the UN, International Courts, even global NGOs.

Overall, I found the book interesting and informative. It is rather academic in style but not enough so to make it inaccessible to the casual reader like myself. What caused me a little more difficulty is Kumar’s assumption of a level of prior knowledge. This isn’t a criticism – the book is clearly aimed at people with an existing interest in empire, or people who are formally studying the subject, and it would be impossible to cover such a wide range if every reference had to be explained in depth for newcomers to the subject. However, the result was that I found the chapters on empires I know something about – Habsburg, Russian and, of course, especially the British – were easier to read and absorb, and I took more away from them. The French Empire (oddly) I know little about and so struggled more as Kumar referred to historical events of which I had no real knowledge. But the worst for me was the section on the Ottoman Empire – my knowledge of that one is almost non-existent and I found the chapter hard work to get through and didn’t feel at the end of it as if I had gained much. I would suggest, therefore, that this certainly isn’t a ‘starter’ book for someone wanting an introductory history to the various empires.

However, for anyone with an existing interest in some or all of the empires discussed, it’s a thought-provoking and interesting read – clearly written, informative, and I found Kumar’s arguments convincing. Despite my struggles at some points, I found it an enjoyable read – one that passes over the simple and now somewhat out-dated wholesale condemnation of empire in favour of a more nuanced look at the various forms and degrees of rule and co-operation between the states and territories that made up these ever-shifting entities.

NB This book was provided for review by the publisher, Princeton University Press.

37 thoughts on “Visions of Empire by Krishan Kumar”