A tiny decrease this week – down 1 to 195. Still, at least it’s heading in the right direction. Better news is that the number of outstanding review copies is down to 29 from 36 the last time I reported it, so that undoubtedly means I deserve cake!

Courtesy of NetGalley. It was the lovely Renee at It’s Book Talk who first tipped me off about this one, knowing my love of tennis, and she then followed up with a great review that made me even more enthusiastic to read it…

The Blurb says: Growing up in the wealthy suburbs of Philadelphia, Anton Stratis is groomed to be one thing only: the #1 tennis player in the world. Trained relentlessly by his obsessive father, a former athlete who plans every minute of his son’s life, Anton both aspires to greatness and resents its all-consuming demands. Lonely and isolated—removed from school and socialization to focus on tennis—Anton explodes from nowhere onto the professional scene and soon becomes one of the top-ranked players in the world, with a coach, a trainer, and an entourage.

But as Anton struggles to find a balance between stardom and family, he begins to make compromises—first with himself, then with his health, and finally with the rules of tennis, a mix that will threaten to destroy everything he has worked for.

Trophy Son offers an inside look at the dangers of extraordinary pressure to achieve, whether in sports or any field, through the eyes of a young man defying his parents’ ambitions as he seeks a life of his own.

This is one I actually bought (*faints*) and it’s not even for one of my many challenges! Every review I’ve read of it has made me keener to read it. It was a runner-up for the Booker in 2016…

The Blurb says: A brutal triple murder in a remote Scottish farming community in 1869 leads to the arrest of seventeen-year-old Roderick Macrae. There is no question that Macrae committed this terrible act. What would lead such a shy and intelligent boy down this bloody path? Will he hang for his crime?

Presented as a collection of documents discovered by the author, His Bloody Project opens with a series of police statements taken from the villagers of Culdie, Ross-shire. They offer conflicting impressions of the accused; one interviewee recalls Macrae as a gentle and quiet child, while another details him as evil and wicked. Chief among the papers is Roderick Macrae’s own memoirs, where he outlines the series of events leading up to the murder in eloquent and affectless prose. There follow medical reports, psychological evaluations, a courtroom transcript from the trial, and other documents that throw both Macrae’s motive and his sanity into question. Graeme Macrae Burnet’s multilayered narrative will keep the reader guessing to the very end.

Courtesy of NetGalley. I read and thoroughly enjoyed Attica Locke’s The Cutting Season several years ago (pre-blog reviews) and have been meaning to read more of her stuff ever since – never got around to it, of course. So I couldn’t resist requesting this one…

The Blurb says: When it comes to law and order, East Texas plays by its own rules–a fact that Darren Mathews, a black Texas Ranger, knows all too well. Deeply ambivalent about growing up black in the lone star state, he was the first in his family to get as far away from Texas as he could. Until duty called him home.

When his allegiance to his roots puts his job in jeopardy, he travels up Highway 59 to the small town of Lark, where two murders–a black lawyer from Chicago and a local white woman–have stirred up a hornet’s nest of resentment. Darren must solve the crimes–and save himself in the process–before Lark’s long-simmering racial fault lines erupt. A rural noir suffused with the unique music, color, and nuance of East Texas, Bluebird, Bluebird is an exhilarating, timely novel about the collision of race and justice in America. 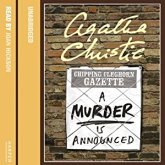 Following my recent enjoyable listens to some of Agatha Christie’s classics, here’s another – same author, but different narrator this time – the wonderful Joan Hickson. I’ve listened to one of her narrations before and she has the perfect voice for the Miss Marple books…

The Blurb says: The villagers of Chipping Cleghorn are agog with curiosity over an advertisement in the local gazette which reads: “A murder is announced and will take place on Friday October 29th, at Little Paddocks at 6.30 p.m.” A childish practical joke? Unable to resist the mysterious invitation, a crowd begins to gather at Little Paddocks at the appointed time when, without warning, the lights go out.

(I do love these tiny blurbs – just enough to intrigue…)