Kiewarra has been suffering from drought for a couple of years now with no sign of rain coming soon. The farmers are worried, many having to kill their livestock for lack of water, and the knock-on effects are being felt through the town. As tensions rise, a tragedy occurs – Luke Hadler shoots his wife and young son, and then kills himself. Or so it seems, but Luke’s parents can’t accept that their son would have done this awful thing. So when Luke’s childhood friend Aaron Falk turns up for the funeral, they ask him to look into it. Falk is now a police detective working in the financial crimes section in Melbourne. It’s twenty years since he was last in Kiewarra, when he and his father left the town under a cloud of suspicion after another death. Many of the townsfolk are unhappy to see him back…

I’m in the highly unusual position of being unable to find a single thing to criticise about this book! So get ready for a dull review – or here’s a better idea, skip the review and read the book instead.

The writing is great – Harper conjures up this drought-ridden and anxious community brilliantly, showing the deep connection between man and nature in a town that relies on its farmers for survival. There’s are some dark descriptions right from the start, with blowflies being the first to find the bodies of Karen and her little son, Billy, but Harper stops well short of being gratuitously gruesome – the balance is just about perfect.

I liked Falk as a character very much, so am rather glad to see that the book is listed as the first in a series. Although he had to face a terrible incident in his past, he hasn’t allowed it to make him either embittered or angst-ridden. He’s professional and intelligent and is someone I’d happily spend more time with. The new local policeman Raco, too, is a refreshing character – a happily married man looking forward to the birth of his first child, he treats people with respect and uses his brains rather than his brawn to get to the truth. And the characterisation is just as good of the other townspeople – from Luke’s grieving parents, to Aaron’s childhood friend Gretchen, to the people who still hold Aaron responsible for what happened back in the past – a whole range from nice to nasty, and each equally convincing.

The plot is strong and well-executed; the familiar device of a crime from the past resurfacing in the present feeling fresh because of the skill in the telling. Raco also has doubts about Luke’s guilt, because of a couple of things that don’t make sense to him. His main issue is that little baby Charlotte survived, and he’s convinced that if Luke had decided to destroy his family out of desperation, he’d have killed the baby too. So Raco and Falk team up, and as they investigate the current crime, the shadows of the past loom ever larger. Harper plants false trails all the way through – I freely admit that I suspected everyone in turn, but was still surprised by the solution. And yet it feels totally fair – all the clues are there and, when the reveal comes, it’s completely credible. Add to all this one of the best and most original thriller endings I’ve read in a long time, and you can see why I’m at a loss to find anything to grumble about.

I part read this book and part listened to it on the Audible audiobook version narrated by Stephen Shanahan. Annoyingly, I can’t fault it either! Shanahan’s narration is the perfect complement to the book. He has a lovely Australian accent, but not at all broad enough to be difficult for non-Australians – it reminded me a little of Pat Cash’s voice (*brief pause while FF swoons*). He doesn’t exactly “act” all the parts, but he manages to differentiate between the different voices. There is one Scottish character, and I was impressed by the accuracy of his Scottish accent.

One thing I really liked was that Shanahan used a “younger” voice for Aaron in the sections set in the past – a little quicker and lighter than the voice of adult Falk in the present. And, whether intentional or not, Harper also made this an easier listen than some audiobooks, by calling the young version Aaron and the present version Falk throughout, which was a huge help in clarifying which period we were in. On the printed page, the past sections are in italics, but of course, this is no help when listening. It would be great, now that audiobooks are becoming such a big thing, if more authors thought about how to differentiate for a listening audience as well as a reading one.

All-in-all, a brilliant read and an excellent listen! I’m enjoying the read/listen experience in general – a good narration adds another level to the characterisation and for books set elsewhere it also means you get the correct pronunciation of place names and so on. Expect to see this one turning up in my annual awards at the end of the year, but don’t wait till then – grab it if you can! 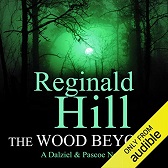