The narrator, having survived WW2, intends to write a book about the bombing of Dresden, but can’t seem to think of anything to say. He visits an army buddy to share memories in a bid to get himself started, but his buddy’s wife is angry, thinking he will write yet another book glorifying war. He promises he won’t – and then he begins to tell the fable of Billy Pilgrim. Written during the height of the Vietnam War, Vonnegut uses his own experiences of an earlier war to produce a powerful protest novel, one that concentrates on the effects of war at the human, individual level.

The film begins by showing us Billy typing a letter to a newspaper, explaining that he is ‘unstuck in time’, travelling backwards and forwards through his own life. This is quite an effective short-cut, though unlike in the book it’s not really expanded on later to show why Billy had decided to make his story public. In the book, we are told Billy’s story by a narrator who makes us aware that it’s a fable, a form he is using because he feels he wants to say something profound about the bombing of Dresden. This isn’t mentioned in the film, so that the viewer is put in the position of having to assume that Billy’s life is “real”, which in turn means that the events perhaps take precedence over the meaning – the reverse of what happens in the book.

Then the film starts to move through Billy’s life, concentrating on his experiences in WW2 as a prisoner of war first in the camps and then later in Dresden before and after the bombing of the city. Although it shifts in time, the film feels as if it takes a more linear approach to Billy’s life – more or less starting at the beginning and ending at the end, but with detours along the way. The book seems more jumbled, more fragmented, and therefore gives, I feel, a clearer picture of Billy’s disorientation. 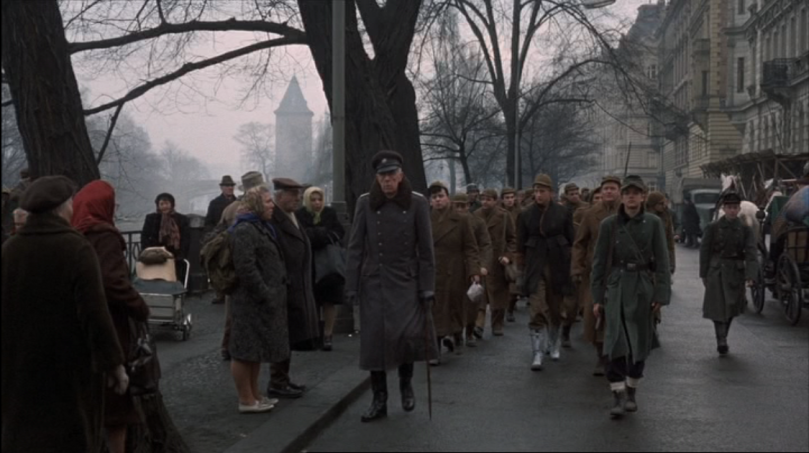 When I look at the notes I took while watching, it turns out it’s primarily a list of things the film misses out. This is a pity, since I’d say it’s a brave and partially successful attempt to bring a complex and difficult book to the screen. Michael Sacks as Billy gives a good performance though I felt that somehow he made film Billy fit his life better than the Billy in the book did. He doesn’t seem as scared in his early army career, nor as disconnected in the later scenes, and he’s played a little more for laughs – and is perhaps more likeable, in fact. For example, in the book we know he doesn’t ever really love his wife – the major reason for him marrying her is that she happens to be the daughter of his boss. I didn’t feel that came across much in the film – she is made rather annoying, but we don’t get inside Billy’s head to know how he feels about her. I’m not normally a fan of having a narrator doing a voiceover in a film, but with a book that is so concerned with what’s happening inside the main character’s head, I began to feel it would have helped to fill some of the gaps.

While I don’t think the book is really science fiction, nonetheless Billy’s visits to the planet Tralfamadore are central, and I was surprised at how underplayed this aspect is in the film. For a start, Hill has wimped out of showing the odd-looking Tralfamadorians, turning them into an invisible species instead. And, rather annoyingly and completely in line with ’70s cinema (my unfavourite decade of film), Billy turns up on the planet in his respectable night wear, whereas the girl turns up nicely naked and with plenty of pert nipple action, so that the lascivious males in the audience have something to drool over while the lascivious females have to make do with their imaginations, unless they happen to have a dressing gown fetish. And then they wonder why we became feminists… The science fiction author from the book doesn’t appear either, though I didn’t feel this was a great loss since he seemed a bit extraneous anyway. Much more oddly, the phrase “So it goes” is entirely missing from the film. Anyone who has read the book will know that it’s used as a chorus every time a death occurs, as a sort of semaphore to mark both the inevitability and futility of war. I can see that, without a voiceover, it would have been quite difficult to shoehorn this in, but without it, I felt the point was left rather unclear. In fact, the film seems to send another message, focussing on a small (and rather trite) part of the Tralfamadorian philosophy, that life is made up of moments and we should concentrate on the good ones. Very little is made of the, to me, deeper part of their philosophy – the part that draws Billy into this particular delusion – that if one can travel backwards in one’s life, one can in a sense keep people alive by visiting them in the past, thus reducing the finality of death. Part of this message comes from another scene that’s also missing – where Billy sees old war movies running in reverse, so that it appears that the dead come back to life, and that the Germans, rather than shooting planes down, are in fact lifting them back into the sky. The omission of this central and moving scene is a strange decision indeed.

Unfortunately the film left me entirely unmoved in the end. While it’s quite entertaining in parts, and has its shocking moments, overall it lacks the depth and power of the book. It’s too linear, we don’t get a real idea of what’s going on in Billy’s mind, and I felt that some of the major points in the book were either omitted entirely or weren’t sufficiently explored. The rather odd “happy ending” that is tacked on therefore came as less of a surprise than it should have done.

So an easy decision this time… 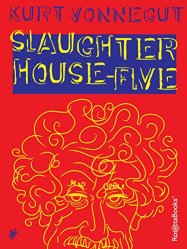 37 thoughts on “Film of the Book: Slaughterhouse-Five”