…for this year’s nominees and winners of the annual FictionFan Awards of 2016.

In case you missed them last week, here’s a quick résumé of the rules…

All nominees must be books I’ve read and reviewed between November 2015 and October 2016 regardless of publication date, but excluding re-reads. The books must have received a 5-star rating.

There will be Honourable Mentions and a Winner in each of the following categories:

I’ve abandoned more lit-fic novels this year than ever before, I think – partly due to my lengthy reading slump and partly due to the current fad for plotless musings and polemics thinly disguised as fiction. However, I’m delighted to say there have been some great reads, too, including a couple from new authors who will hopefully go on to even greater things in the future. The shortlist is too long, but I really couldn’t decide which of these fantastic books to leave out, so I’ll try to keep my comments on each brief…

The High Mountains of Portugal by Yann Martel

The three interlinked stories in this book are each very different but with common themes running through them, and all linked to a small town in the High Mountains.  The whole book is deliciously enigmatic and sometimes surreal, and I’m sure could be read in a hundred different ways. It is a subtle discussion of the evolution vs. faith debate, with the old evolutionary saw of “risen apes, not fallen angels” appearing repeatedly. Chimps appear in some form in each of the sections, though symbolically rather than actually, except in the third. But meaning aside, the sheer quality of the writing along with the more overt themes of grief and love make it a wonderful read – one that has left some indelible images in my mind.

When fading spy Giles Holloway falls drunkenly down his stairs and breaks his leg, he must somehow get the Top Secret file he has “borrowed” back to the Admiralty before anyone notices it’s missing. So he turns to his old friend and colleague Simon Callington for help, sucking Simon into a situation that threatens to destroy everything he holds dear.

In many ways this is a standard spy thriller. But mostly what it is is a set of brilliant character studies showing the impact of this event on the lives of all those involved. It’s also a highly intelligent twist on The Railway Children where we see the story from the adults’ side, and an entirely credible portrayal of a fictionalised version of the Cambridge spy ring. Great stuff!

It’s 1958, and Greenwich Village is the centre of the hipster scene, populated by aspiring poets and writers. The three main characters take turns to narrate their own stories: Eden, determined to make it in the male-dominated world of publishing; rich boy Cliff, who is pretty sure he just needs a break to make it big as a writer; and Miles, who has real talent as a writer, but as a black man must face the discrimination that is an integral part of the society of the time. When their lives intersect, a chain of events is started that will change the course of their lives.

Rindell has the gift of creating truthful characters with individual voices, and of putting them into settings that feel totally authentic. Her scene-setting is superb – she brings the Village to life in all its seedy vibrancy. A great new talent – one to watch.

This is a strange book that takes one of the clichés of science fiction – cryogenics – and turns it into something that is either incomprehensible or profoundly thought-provoking, depending on how willing the reader is to play along. However, behind the cliché, a distinctly unsettling atmosphere of unease soon begins to seep out of the pages, as the narrator wanders alone through the silence of the cryogenics facility, down long corridors full of doors with nothing to indicate what is behind them. At the end of some of the corridors are viewscreens, showing increasingly horrific images of disaster, destruction and death. It’s an exploration of identity, and of the importance of death in how we define and measure life. From a shaky beginning, I grew to love it, for the writing, the imagery and the intelligence of it.

It’s 1943, and the Allies rely on the shipping convoys from the US to keep their battered countries fed and munitioned. The tide has been flowing in the Allies favour since the German Enigma codes were broken at Bletchley Park. But now the Germans have changed the U-boat code, threatening not only individual convoys but the entire defeat of the Allied forces. Tom Jericho, hailed as one of the most brilliant codebreakers, is on a break, suffering from a combination of stress, overwork and a broken heart over a girl named Claire. But with this new threat, despite his fragile health, he’s urgently needed back in Bletchley. And when he gets there, he discovers Claire is missing…

A first rate spy thriller, written with all the qualities of literary fiction, it’s the authenticity of the setting and the superb plotting that make this one so great.

The Girls by Emma Cline

Evie is 14 the summer she meets the girls from the ranch – the summer of ’69. Evie’s fascination quickly turns to infatuation, and a desire to prove herself mature enough to belong to this little group. Before long, she’s spending most of her time at the ranch, where she meets the group’s charismatic leader, Russell, and finds herself willingly sucked into a world that passes beyond hippy commune to cult. And by the end of the summer something so shocking will happen, it will shadow her life for ever.

The characterisation is superb, especially of Evie herself, both as a girl on the cusp of womanhood in the ’60s, and as an adult in late middle-age in the present. And the depiction of the cult is entirely credible, set well within this period of generational shift and huge social upheaval. An excellent book, all the more so considering it’s Cline’s début. 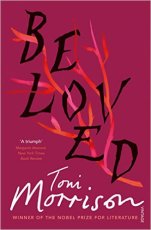 Sethe and her daughter, Denver, live isolated lives in their community, because everyone knows that their house at no. 124 is haunted. Sethe’s two sons have already left, unable to take any more of the spiteful tricks played by the ghost. But Sethe and Denver see the ghost differently. To Sethe it is the other daughter that she lost, a child known only by the single word carved on her gravestone, “Beloved”. The ghost is angry but Sethe understands why and endlessly forgives, no matter how cruel or violent her behaviour. And to Denver, the ghost is her sister, her only companion in her loneliness. Then one day a man from Sethe’s past arrives, Paul D, who knew her when they were both slaves on Sweet Home. It seems at first that he has driven the ghost away, until some weeks later a strange young woman arrives at the house – her name, Beloved.

This isn’t just a book of the year for me, it’s one of the books of my lifetime. Morrison’s brilliant writing and imagery turn it into one of the most powerful and emotionally devastating books I have ever read. There is furious anger here, in scenes of brutal horror, cruelty and vile humiliation, but the overwhelming tone is of a sorrowful lament for humanity. And to make it bearable, just, there is also beauty, love, some kind of healing, and ultimately hope. Sethe’s is a story that must be understood if we are ever to truly understand ourselves, and ultimately isn’t that what literature is for? Tragic that such a book should ever have come to be written, heartbreaking and devastating to read, but I count it a true privilege to have been given an opportunity to hear Beloved’s story.

the nominees for the Book of the Year Award are…

FICTIONFAN BOOK OF THE YEAR 2016

Normally I’d rather choose a new book as Book of the Year, but Beloved is so outstanding it had to win! Some of the Great American Novel Quest books I’ve read this year have been pretty disappointing, but I’ll always be glad I started the quest since it was through it that I discovered this book. I realise most people have already read it, but if, like me, you’ve managed to miss it up till now, it gets my highest recommendation. The beautiful writing, savage imagery and deep understanding and sympathy for humanity make it a truly wonderful read – unforgettable.

Thanks to all of you who’ve stuck with me through this year’s awards feature.