At the New Year I added up the full extent of the horror of the TBR, including the bits I usually hide. So time for another count to see how I’m doing…

Hmm… not doing too well on the target of taking fewer books for review, am I? However, regarding the overall total, in my defence I had to add roughly twenty books or so to the wishlist when I created my Classics Club list, so if it hadn’t been for that there would have been a significant decrease – and the Classics challenge runs over five years. All in all, the increase is not as devastating as I anticipated…

The Around the World in 80 Books Challenge

Last check-in was at the end of April, so let’s see where I’ve been since then.

I witnessed a murder in Milan first of all in The Murdered Banker. Javier Marias took me to Madrid in A Heart So White – also to Havana in Cuba, but I’m only claiming one destination per book. Arthur C Clarke took me not just around the world but all the way to Saturn in 2001: A Space Odyssey. (What? Cheating? Not at all – if the political situation doesn’t improve soon, I assure you I’ll be on the next space ship out of here…) My next and most recent trip was one of the Main Journey destinations – off on the Orient Express with Graham Greene in Travels With My Aunt.

I’ll be taking part in this event in September and I’m hoping some of you might join in too. It’s being run jointly by Little Bits of Classics and Christina Wehner, both of whom blog mostly about movies. However, the idea of this blogathon is to encourage book and movie bloggers to get together by reviewing either books or film and TV adaptations, or by discussing some aspect of the Queen of Crime’s work. Pop on over to Christina’s blog to find out more – it will be a lot of fun! 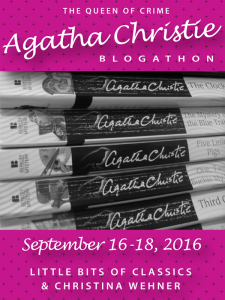 Oh dear! I’m so far behind with this challenge it may be impossible to catch up! But I’ll try! And my choices aren’t working out too well – I’ve abandoned three to date, as many as in the whole of the rest of the year. Here’s my ‘progress’ so far…

Exposure by Helen Dunmore
The Widow by Fiona Barton

Abandoned and replaced – no review

replaced by The Visitor by Maeve Brennan

replaced by From the Dust Returned by Ray Bradbury

The Visitor by Maeve Brennan

So, 17 books to read and review over the next two months – still do-able… so long as I don’t get distracted…

And finally, a couple of books that are heading towards the top of the pile…

Courtesy of NetGalley. Loved Moriarty’s last book Little Lies and can’t wait to read this one!

The Blurb says: Despite their differences, Erika and Clementine have been best friends since they were children. So when Erika needs help, Clementine should be the obvious person to turn to. Or so you’d think. For Clementine, as a mother of a two desperately trying to practise for the audition of a lifetime, the last thing she needs is Erika asking for something, again. But the barbecue should be the perfect way to forget their problems for a while. Especially when their hosts, Vid and Tiffany, are only too happy to distract them.

Which is how it all spirals out of control…

NetGalley again. One of the big releases this summer, and also one of my 20 Books.

The Blurb says: Northern California, during the violent end of the 1960s. At the start of summer, a lonely and thoughtful teenager, Evie Boyd, sees a group of girls in the park, and is immediately caught by their freedom, their careless dress, their dangerous aura of abandon. Soon, Evie is in thrall to Suzanne, a mesmerizing older girl, and is drawn into the circle of a soon-to-be infamous cult and the man who is its charismatic leader. Hidden in the hills, their sprawling ranch is eerie and run down, but to Evie, it is exotic, thrilling, charged—a place where she feels desperate to be accepted. As she spends more time away from her mother and the rhythms of her daily life, and as her obsession with Suzanne intensifies, Evie does not realize she is coming closer and closer to unthinkable violence, and to that moment in a girl’s life when everything can go horribly wrong.

So…what do you think? Do either of these tempt you?

P.S. Next Tuesday, I will be hosting my first ever guest post, and I have to tell you it’s a major goodie! Not telling who, but here’s a hint… it’ll be a Tuesday ‘Tec post. I do hope you’ll pop in…