A tribe of man-apes is visited by aliens who use a strange artefact to stimulate their minds, thus setting them on a course to become fully human and develop the intelligence that will eventually allow them to dominate their world. Millennia later, mankind has reached the moon, only to find hidden another similar artefact, one that this time will send them on a journey to the furthest reaches of the solar system and perhaps beyond…

Well, it’s easy to see why this one is considered a sci-fi great. It has everything a good cult classic should have – lots of hard science, a just about feasible premise and a completely incomprehensible ending that leaves the door open for readers to make up their own interpretation, which they have apparently been doing with varying degrees of wackiness since the book was first published in 1968.

This is a film I’ve tried to watch a few times in the past, and on each occasion have given up halfway through in order to prevent death from boredom. So I was intrigued to see whether reading the book would change my opinion of the film. 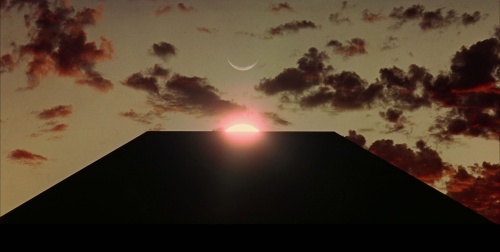 What I never realised before is that both book and film were written simultaneously as a joint venture between Arthur C Clarke and Stanley Kubrick. The film screenplay is credited to Kubrick and Clarke, in that order, and apparently the book was originally intended to be credited to Clarke and Kubrick, in that order, to highlight the specific influence of each man on each medium. They developed the basic idea together based on some earlier stories of Clarke’s, although the film does diverge somewhat from the book, especially around that mystical ending. The book, while still leaving much open to interpretation, tells the story much more clearly, while the film concentrates on visuals and effects to create a kind of mystical experience that, in Kubrick’s words, “hits the viewer at an inner level of consciousness, just as music does, or painting.”

OK, then. That probably works for people who instinctively “understand” music and painting, but I’m strictly a words kind of gal, which is probably why the film didn’t initially work for me. But having read the book, on this viewing I wasn’t trying to work out what it all meant, or sighing with exasperation at the lack of dialogue. Instead, I was able to watch it as intended – as an amazing visual and sound experience that, once I could get into the flow, took me on a trip as acidy as anything that came out of the ’60s.

The first section, the dawn of man, works much better in the book in terms of giving a real insight into the society of the man-apes and how the alien monolith influenced their development. In the film, it’s beautifully shot with some truly glorious imagery, climaxing with the fabulous Also sprach Zarathustra music. The man-apes themselves do unfortunately look somewhat like men in ape costumes occasionally, but I suspect that’s because years of CGI have set our expectations too high. But knowing what was happening meant that it didn’t matter that the film perhaps didn’t get the full meaning across – the book was in my head almost like an explanatory (and unobtrusive) voice-over.

The section on the moon is probably the most dialogue-heavy part of the film, which helps to explain a little what’s going on. It also humanises the film a little, being almost the only place where we see people interacting with each other.

The space journey to Jupiter (unlike in the book, where Saturn is the destination) gives Kubrick the chance to play brilliantly with special effects, especially of weightlessness. The fact that these effects still work some half a century later is pretty amazing, and great to see how he interpreted Clarke’s detailed descriptions of how space flight works. Using Strauss’ Blue Danube waltz as the music during the space sequences is inspired – it works so well with the floatiness of everything that happens in and out of the ship. The film cuts a lot of the sciency stuff out, though – no sampling the crust of comets, nor sling-shotting around Mars and so on – but I did feel in the book that this section got a little bogged down in science, so the film worked well for me here in concentrating more on technical stuff and in moving the story along.

In the film, I’m not at all sure if I would have caught the reasons why HAL, the ship’s sentient computer, begins to malfunction but, again, the book explains this much more clearly, while the film makes it a rather more emotional sequence, I think. There’s very little opportunity for the actors to shine, since they don’t do much except turn switches on and off and talk to the computer, but actually I was impressed by Keir Dullea’s performance as Dave Bowman. In some scenes, the camera stares directly into his face for extended periods and, with little dialogue, he manages to get across a range of changing emotions very well. 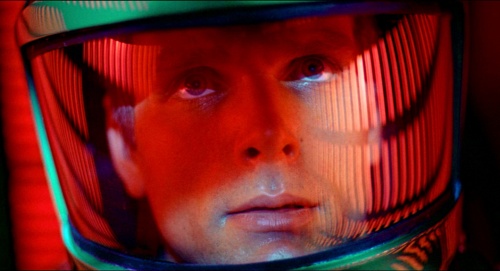 But the star of the show (and in the past I’ve always given up before I got to this bit) is the surreal and truly psychedelic sequence in the fourth and final section. All done to some beautifully dissonant modernist music composed by Georgy Ligety, the effects are wonderful – a kaleidoscope of amazingly imaginative spacescapes, ever-changing but in a flow, creating a real feeling of infinity and the awful grandeur and possibilities of the universe. Then a totally surreal section by which, frankly, I would have been baffled if I hadn’t read the book, and finished with what seems like a fairly major variation from the book, but which, on reflection, is certainly within the same philosophical ballpark. I’m telling you, man, it totally blew my mind! Awesome!

My dear friend wikipedia (to whom thanks for all my newly acquired background knowledge) tells me that Clarke said “I always used to tell people, ‘Read the book, see the film, and repeat the dose as often as necessary’”. I heartily concur, and have an urgent desire now to read the book then see the film all over again. And next time I read the book, I’ll have the fabulous images and music from the film running in my head. Two parts that are differently great but which, together, become something uniquely wonderful.

And so, for the first and perhaps only time… 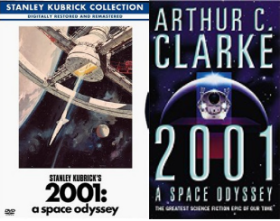 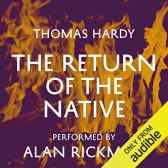