A round of applause please…

…for this year’s nominees and winners of the annual FictionFan Awards of 2015.

In case you missed them last week, here’s a quick résumé of the rules…

All nominees must be books I’ve read and reviewed between November 2014 and October 2015 regardless of publication date, but excluding re-reads. The books must have received a 5-star rating.

Despite the fact that I’ve grown more and more unenamoured with a lot of contemporary crime, I’ve still had lots of good reads this year, though on looking back several of them are reissues of older books or have taken a slightly quirky approach. But simply because I read more crime than any other genre, this is still the section that is hardest to decide. So because the choice was so hard, I’ve decided also to list the nominees that didn’t quite make it into the final list. All of these books were great reads, and I look forward to reading more from each of these authors in the future.

The Voices Beyond by Johan Theorin

Young Jonas is spending the summer on the island of Öland at the resort owned by his family, the Klosses. One night, he takes his dingy out onto the sea. Drifting in the darkness, a sudden shaft of moonlight shows a boat approaching and he doesn’t have time to get out of the way. He manages to climb aboard the boat before his dingy is sunk, but what awaits him there is the stuff of nightmares – dying men (or are they already dead?) on the deck stalking towards him and calling out in a language he doesn’t understand. This brilliantly atmospheric opening sets the tone for a book that combines a mystery in the present day with a story that takes us back to the USSR in the days of Stalin. Plot, writing, research, characterisation – all top quality, and it finishes off as atmospherically as it began. A great read – frankly, this could easily have been the winner.

The Zig-Zag Girl by Elly Griffiths

Set in Brighton post-WW2, this is a great start to a new series from the author of the Ruth Galloway series. Edgar Stephens and Max Mephisto served in a secret unit known as the “Magic Men” during the war. Now Edgar is a police detective and Max has gone back to his profession as a stage magician. When a dismembered corpse turns up, it has echoes of one of Max’s tricks, and as Edgar investigates it appears the solution may lie in their wartime past. Both place and time are done very well, with the shadow of the war still hanging over the characters and the world they inhabit. With an intriguing, complex plot, an interesting slant on a unique (and not entirely fictional) aspect of the war, some very enjoyable humour and a touch of romance, this is a great mystery of the traditional kind. And best of all, unlike the Ruth books, it’s written in the past tense.

As Paris waits uneasily for war to begin, Roger Flavières is approached by an old college friend, Gévigne, who puts an odd proposition to him. Gévigne is concerned about his wife, Madeleine. She has been lapsing into odd silences, almost trances, and seems bewildered when she comes out of them. Gévigne knows she’s been going out during the afternoons but she says she hasn’t – either she is lying, which Gévigne doesn’t believe, or she has forgotten. Gévigne wants Flavières to follow her, partly to find out what she’s doing and partly to make sure she is safe. This is, of course, the book on which the Hitchcock film was based and, for once, despite my love for all things Hitchcock, on this occasion I think the book is better. Hitchcock’s decision to elevate the importance of the vertigo aspects, as opposed to the book’s study of the effects of obsession on an already weak mind, somehow makes his Ferguson a less complex and intriguing character than Boileau-Narcejac’s Flavières. And the ending of the book is much more satisfying than that of the film. An excellent read.

Back in 1995, a massive snowstorm brought traffic to a halt on the road between Bad Hersfeld and Eisenach. As people huddled in their cars overnight, trying to keep warm, The Traveler stepped out of his vehicle and worked his way along the line of cars, murdering the people inside. By the time the snowploughs got through, twenty-six people were dead and there was no trace of The Traveler. In the present day, Ragnar Desche has found the frozen body of his brother Oskar and is out to get revenge against whoever killed him and stole the massive stash of heroin he was keeping for Ragnar. And four teenage girls are worrying about the fifth member of their little clique who has been missing for nearly a week… This is a great book, written almost entirely in the second person through the eyes of each of the huge cast of characters in turn. Drvenkar handles this unusual technique superbly, forcing me to identify with each of them, however unlikely. It’s noir dark shot through with just enough gleams of light to keep it bearable, pacey and tense, grim and disturbing, no punches pulled – and quite stunning. I’m still not completely sure it shouldn’t be the winner… 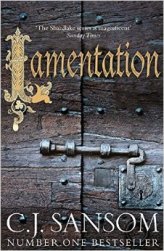 It is 1546, and an increasingly ailing Henry VIII has swung back to the traditionalist wing of the church – in fact, some fear he might be about to make amends with the Pope and take the country back to Catholicism. The constant shifts in what is seen as acceptable doctrine have left many sects, once tolerated, now at risk of being accused of heresy. And, as the story begins, Anne Askew and three other heretics are about to be burned at the stake for preaching radical Protestantism. At this dangerous time, Henry’s last Queen, Catherine Parr, has written a book, Lamentations of a Sinner, describing her spiritual journey to believing that salvation can be found only through study of the Bible and the love of Christ, rather than through the traditional rites of the Church. Not quite heretical, but close enough to be used against her by the traditionalists. So when the book is stolen, Catherine calls on the loyalty of her old acquaintance, Matthew Shardlake, to find it and save her from becoming another of Henry’s victims. And when a torn page turns up in the dead hand of a murdered printer, it’s clear some people will stop at nothing to get hold of the book…

I have long held that Sansom is by far the best writer of historical fiction, certainly today, but perhaps ever; and I’m delighted to say that this book is, in my opinion, his best to date. A huge brick of a book, coming in at over 600 pages, and yet at no point does it flag. Like the earlier books, this one is completely immersive – the length of it is matched by its depth. The fictional aspect is woven seamlessly into fact, and the characters and actions of the real people who appear in the novel are consistent with what we know of them through the history books. The combination of the personal and the political is perfectly balanced, and Sansom never fails to take the consequences of events of previous books through to the next, meaning that the recurring characters continue to develop more deeply in each one. There’s always a long wait between Shardlake novels, but they are invariably worth waiting for. And as England moves on to dealing with the aftermath of Henry’s death, I very much hope that Shardlake will be there to lead us through it…