…for this year’s nominees and winners of the annual FictionFan Awards of 2015.

All nominees must be books I’ve read and reviewed between November 2014 and October 2015 regardless of publication date, but excluding re-reads. The books must have received a 5-star rating.

There will be Honourable Mentions and a Winner in each of the following categories:

The FF definition of ‘genre fiction’ for the purpose of these awards is basically anything that doesn’t quite fit into one of the other categories. I’ve not read nearly as much genre fiction as I intended this year, and a lot of what I did manage to fit in were re-reads of some classic sci-fi. Despite that, I had some great reads during the year… a mix of old and new.

It’s twelve years since we left Paul Muad’dib at the end of Dune – twelve years in which his war against the Harkonnen and the Emperor has grown into a jihad resulting in the deaths of tens of billions and the destruction of several planets. Paul’s beginning to wonder if perhaps things might have gone a little too far. His power of prescience has made him an unwilling Messiah to his people, but the ability to see so many possible futures, none of them good, has left him desperate to find a way out that will stop the killing…

Though this is the sequel to Dune, I think it’s a better book, but it really is necessary to read them in order. Unfortunately the books go badly downhill after this one, so I abandoned the series. But the first two books undoubtedly deserve their status as classics for the quality of the writing and the imagination that created the unforgettable desert world of Arrakis.

The Haunting of Hill House by Shirley Jackson

Hill House has a reputation for ghostly goings-on – so much so that even the servants won’t stay around after dark. So it’s the ideal place for Dr John Montague to carry out an investigation into supernatural manifestations. He collects together a little group of strangers – selected because they have had previous experiences of strange happenings, and they all set off to spend the summer living in the house…

Finding Shirley Jackson is one of the many benefits I’ve had from blogging – she’s not nearly so well known on this side of the pond as in the US. This one shows all her skill in playing with expectations, her gothic references always just a little subverted, making the whole thing feeling slightly off-kilter. Though I thought the ending fell away a little, there were plenty of genuinely creepy moments along the way, along with some delicious humour. Another true classic.

Twenty Trillion Leagues Under the Sea by Adam Roberts

It’s June 1958, and French experimental submarine the Plongeur has taken off on her maiden voyage to test her new nuclear engines and her ability to dive to depths never before reached. The first trial dive is a success, so the Captain gives the order to go deeper, down to the limits of the submarine’s capacity. But as they pass the one thousand five hundred metre mark, disaster strikes! Suddenly the crew lose control of the submarine, and it is locked in descent position. The dive goes on… past the point where the submarine should be crushed by the pressure… and on… and on…

Stylistically this reads like classic sci-fi from the early twentieth century and is filled with references to many of the greats. But the quality of the writing and imagination lifts it from being pastiche and makes it something unique. Again, I felt it fell away a bit towards the end, but for the most part I found this an exciting ride, cleverly executed and full of imagination, and with a great mix of tension, humour and horror. 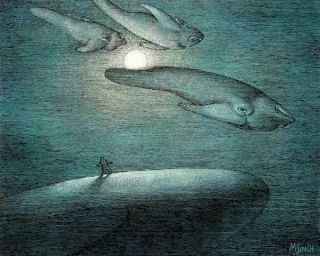 It’s 1937 and war clouds are gathering over Europe. Jack Miller is poor and struggling in a job he hates, so he jumps at the chance to join an expedition to Gruhuken, an abandoned mining settlement in the Arctic. But the expedition begins to hit trouble even before they leave London, with a couple of the men having to drop out at the last moment. And the troubles don’t end there – once they are in Gruhuken a series of events mean that eventually Jack is left alone to keep the expedition alive…and the long dark Arctic winter is beginning…and Jack begins to feel he may not be as alone as he thinks…

This is a great ghost story – or maybe it isn’t. Is there something out there in the never-ending Arctic night or is it all in Jack’s mind? We only have his own narration to go on and, as with all the best horror, nothing is certain. It’s all done by a brilliantly executed build-up of psychological terror – from ‘don’t go there’ warnings from the captain of the ship to things barely glanced from the corner of the eye, sensations of a presence, and distorted perspectives. The writing is top quality – this book would sit just as well in the literary fiction category as in horror. I dare you to read it… 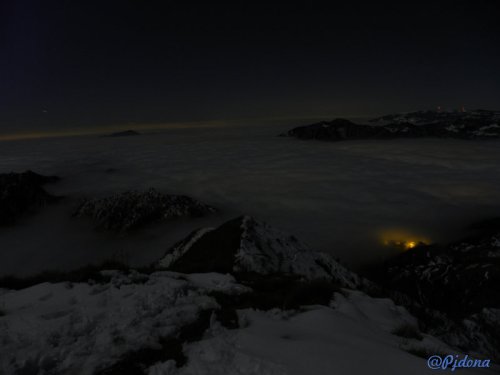 The Martian Chronicles by Ray Bradbury

Written as short stories for magazines in the late 1940s and pulled together with a series of linking pieces for publication in book form in 1951, the book is set around the turn of the millennium, when man is beginning to colonise Mars.

Because of the way it developed, the book is very episodic in nature and Bradbury reinvents Martian society anew depending on the story he wants to tell. After reading the first few chapters, I was a little puzzled by the book’s status as an acknowledged sci-fi great  – the stories were good but relatively standard. However as the book progresses Bradbury allows his imagination to take full flight and some of the later stories are beautifully written fantasies with more than a little philosophical edge. Many of the later stories blew me away, leaving indelible images in my mind. As with the best sci-fi, the book is really an examination of what it means to be human and Bradbury approaches the question from many different angles, each as thought-provoking as the one before. And on top of all that, he produces some of the highest quality writing I have come across in sci-fi. I’d hate anyone to be put off this one by the genre label – it’s as stimulating and well written as most ‘literary’ novels and shows a great deal more imagination than they usually do.