Another beautifully illustrated book published by the British Library, this makes a fine companion piece to London: A Literary Anthology, which I reviewed a few months back. This time the focus is on food, with extracts from many familiar and not-so-familiar authors. There is a mix of both poetry and prose, grouped together under headings such as: The Art of Hospitality, Love Bites, Childish Things, etc. In each section, the extracts go roughly from older to newer – for example, Dazzling All Beholders runs from Robert May writing in the 17th century to F Scott Fitzgerald in the 20th. As well as giant literary figures – Dickens, Flaubert, Proust and his famous madeleines (which frankly left me thinking ‘Meh! Is that what all the fuss is about really?), DH Lawrence, et al – there are food writers, such as Brillat-Savarin and Hannah Glasse.

“Weal pie,” said Mr Weller, soliloquising, as he arranged the eatables on the grass. “Wery good thing is weal pie, when you know the lady as made it, and is quite sure it ain’t kittens; and arter all though, where’s the odds, when they’re so like weal the wery piemen themselves don’t know the difference?” 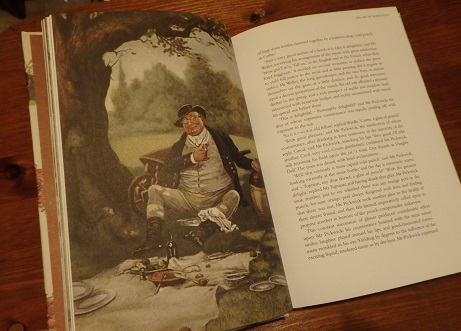 Most of the extracts are fairly short – no more than a couple of pages, and to be honest I didn’t find them quite as mouth-watering on the whole as I was expecting. Often the pieces are more about things associated with food, rather than food itself – restaurants, dining rooms, dinner companions. The balance is very heavily weighted towards older writers, with very few, if any, contemporary writers making an appearance. I think the most recent extract is from about the 1930s. This may be for copyright reasons, at a guess, but it means that none of the exciting food writers of the last few decades are included, nor any modern literary writers.

“That is indeed an excellent suggestion,” said the Water Rat, and hurried off home. There he got out the luncheon basket, and packed a simple meal, in which, remembering the stranger’s origin and preferences, he took care to include a yard of long French bread, a sausage out of which the garlic sang, some cheese which laid down and cried, and a long-necked straw-covered flask wherein lay bottled sunshine shed and garnered on far Southern slopes.

Kenneth Grahame, The Wind in the Willows

Without a doubt my favourite section was Childish Things, taking me back to many books I loved. Ratty’s picnic from The Wind in the Willows, the Turkish Delight from Narnia, lashings of ginger beer courtesy of Enid Blyton, and Heidi’s first taste of toasted cheese – all great scenes that really have lived in my memory since childhood. There’s a section on fabulous feasting, with lists of enough dead animals to make a vegetarian faint, and I was glad to get from there to Simple Pleasures, on such delights as tea and hot, buttered toast. And Distant Times and Places brings us travellers’ tales, from Gulliver to Captain Scott.

Afterwards the tables were covered with meats, antelopes with their horns, peacocks with their feathers, whole sheep cooked in sweet wine, haunches of she-camels and buffaloes, hedgehogs with garum, fried grasshoppers, and preserved dormice. Large pieces of fat floated in the midst of saffron in bowls of Tamrapanni wood. Everything was running over with wine, truffles, and asafoetida. Pyramids of fruit were crumbling upon honeycombs, and they had not forgotten a few of those plump little dogs with pink silky hair and fattened on olive lees…

The book is beautifully illustrated, if not quite so lavishly as the London anthology. Most of the illustrations come from the British Library’s own collection, and they are often the specific original illustrations that match the text. Each extract is headed with a short introduction giving the date of writing, which I appreciated, having remarked on the lack of this information in the London book. The list of illustrations is at the back of the book, so requires flicking backwards and forwards if the reader wants to know more about them. The physical quality of the book is wonderful. The cover is gorgeous and pleasingly tactile, the pages are printed on high quality paper and the font and layout are clean and clear. A book that would make a great gift for any food-lover, the more adventurous of whom might want to try out some of the recipes in the final section. I’m not sure I want to eat Alexandre Dumas’ Arab Omelette (made from ostrich and flamenco eggs) but Emily Dickinson’s Gingerbread would go nicely with George Orwell’s Nice Cup of Tea…

Well wash and clean a red herring, wipe it dry and place it in a pie dish, having cut off the head, and split it in two up the back, put a gill or two of whisky over the herring, according to size, hold it on one side of the dish, so that it is covered with the spirit, set it alight, and when the flame goes out the fish is done.

NB This book was provided for review by the publisher, The British Library.

50 thoughts on “Pleasures of the Table: A Literary Anthology selected by Christina Hardyment”