“Tell the Wind and Fire where to stop…”

Set before and during ‘The Reign of Terror’ in Revolutionary France, A Tale of Two Cities ranks amongst the finest of Charles Dickens’ works, even though it is in many ways quite different to his other great books. The humour and exuberant language is toned down; there is not the huge cast of peripheral caricatured characters; there are no major sub-plots. Instead there is a tightly-focused and exciting plot, a hero in Sidney Carton of much greater complexity than Dickens’ norm, and some of his most hard-hitting commentary on the effects of poverty and abuse, not just on those who suffer directly from it, but on society as a whole. While often Dickens’ books feel as if they have organically grown during the writing, with Dickens himself being as surprised as the reader by the direction they take, this one always feels to me as if he had planned it down to the last detail before he began. Nothing happens that isn’t relevant, and everything is explained completely in the end. And it has a purpose – one overwhelming theme: to show the possibility of redemption and resurrection, personal and political. That theme is what carries the reader through what must be the darkest of Dickens’ stories to the sense of hope that is inherent even in the tragedy of the ending.

“Since I knew you, I have been troubled by a remorse that I thought would never reproach me again, and have heard whispers from old voices impelling me upward, that I thought were silent for ever. I have had unformed ideas of striving afresh, beginning anew, shaking off sloth and sensuality, and fighting out the abandoned fight. A dream, all a dream, that ends in nothing, and leaves the sleeper where he lay down, but I wish you to know that you inspired it.”

Dickens throws us into a state of menace right at the start of the novel, as Mr Lorry makes his way to Dover on the mail coach, the passengers and coachmen all in a state of extreme anxiety that the coach will be held up by highwaymen. This, together with the introductory chapter comparing the social inequalities and injustice in both England and France in the period, are an indication that Dickens is warning that the situation in England is not so very different to the conditions that led to the uprisings in France. This is one of the book’s strengths – Dickens doesn’t do the too frequent British thing of assuming that upheavals in foreign lands are somehow due to a form of moral inferiority. He makes it clear all the way through that the social problems in pre-Revolutionary France are paralleled in English society, and that the end result could very easily be the same.

As always with Dickens though, the story is the thing. Unlike too many modern writers of misery, he recognised that the first thing an author has to do is entertain his audience. That way they might stick around long enough to hear the message. The story proper begins as Doctor Manette is released from the Bastille after a long imprisonment without trial, for reasons that only become known to the reader towards the end of the book. ‘Recalled to life’ through the love of the daughter he never knew he had, he returns to England where he regains his health and sanity. His beloved daughter Lucie falls in love with a young Frenchman, Charles Darnay, and the little family settles happily in a small house in London. But always Dickens keeps us aware of the approaching political hurricane that will soon sweep through France, and we know that somehow the family’s fate is tied to those events. When Charles Darnay is summoned to aid an old servant imprisoned for his loyalty to Darnay’s aristocratic family, the action moves to Paris…

“Patriots and friends, we are ready! The Bastille!”

With a roar that sounded as if all the breath in France had been shaped into the detested word, the living sea rose, wave on wave, depth on depth, and overflowed the city to that point. Alarm-bells ringing, drums beating, the sea raging and thundering on its new beach, the attack began.
***
“To me, women!” cried madame his wife. “What! We can kill as well as the men when the place is taken!” And to her, with a shrill thirsty cry, trooping women variously armed, but all armed alike in hunger and revenge.

It’s in Dickens’ depiction of Paris at this horrific moment in its history that he shows his genius, with some fantastic writing of the storming of the Bastille and the behaviour of the mob. With barely concealed anger he straddles both sides – showing the decades of cruelty and abuse meted out to the poor by pampered aristocrats, and the dehumanising effects of this, turning the Revolutionaries into savage monsters, akin to devils, when they come to power, wreaking vengeance even on the innocent. Though never sympathising with the viciousness on either side, he nonetheless brings the reader to feel pity amidst the revulsion for those caught up in these times – to understand how mobs become a force apart from the individuals within them. Madame Defarge is one of his greatest creations. The driving force behind the Revolutionary zeal to feed the guillotine, she is monstrous in her savagery, all the more so for being female. And yet we see the forces that have formed her and it is a hard heart indeed that can feel no trace of pity for her in the end – and for those who follow her. Dickens shows us how weak people can be in times of great turmoil, as neighbour betrays neighbour, and loyalty to a cause, or fear of it, trumps personal morality.

Crush humanity out of shape once more, under similar hammers, and it will twist itself into the same tortured forms. Sow the same seed of rapacious license and oppression over again, and it will surely yield the same fruit according to its kind.

Six tumbrils roll along the streets. Change these back to what they were, thou powerful enchanter, Time, and they shall be seen to be the carriages of absolute monarchs, the equipages of feudal nobles, the toilettes of flaring Jezebels, the churches that are not my father’s house but dens of thieves, the huts of millions of starving peasants.

But amidst all this horror and tumult, there is Sidney Carton. In love with Lucie but knowing that she could never love someone so deeply flawed as he, his unselfish devotion is brilliantly portrayed, without any of the wild exaggeration of character in which Dickens often indulges. Carton is believable and therefore the reader cares about him. The redemption of this weak drunkard, a wastrel who has thrown away the talents he was born with, is the heart of the plot, and central also to the wider message of the book – that through love, faith and sacrifice, resurrection is possible – for the person, but also for this deeply fractured society. Carton’s final scenes and last speech are beautifully written and intensely moving. I can’t think of another book where both the opening and closing lines are quoted so often that they have passed into cliché. (“It was the best of times, it was the worst of times…”, “It is a far, far better thing that I do…”) 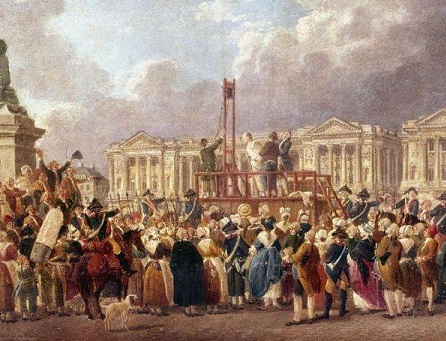 For me, Bleak House is the best, but this one has all the things that make Dickens great – the writing, the plotting, the social conscience – without the things that sometimes put new readers off – the caricatured comedy, the overblown descriptions, the saccharin romances. If anyone were to ask me where to start with Dickens, this would be the book I would recommend.

73 thoughts on “A Tale of Two Cities by Charles Dickens”