Big fish in a small pond…

Emma Woodhouse is unusual amongst Austen heroines in being independently wealthy and therefore with no need to marry. When we meet her, she is twenty-one, still untouched by love, and determined to remain single. This is a small society with a tiny number of gentlefolk, so that everyone knows every detail of each other’s lives, and the main interest of the book is in the descriptions of the society – in this case showing the very limited and somewhat dull life of young gentlewomen in small towns where they are socially superior to all their neighbours. Emma lives with her elderly father and, as the book begins, has just lost the constant companionship of her long-time governess, Miss Taylor, who has married Mr Weston, another resident of the town. The only other person in the neighbourhood who matches the social standing of the Woodhouses is Mr Knightley, owner of the neighbouring estate and friend of Emma’s father. He has known Emma all her life and has taken it upon himself to guide her intellectual and emotional development since her early childhood.

The plot, such as it is, is a simple comedy of manners. Although she still sees Mrs Weston nearly every day, Emma feels the loss of female companionship, so takes under her wing young Harriet Smith, the illegitimate daughter of a father of unknown identity. The small cast of characters is further enhanced by the arrival of Jane Fairfax, niece of the impoverished but voluble Miss Bates. Soon after, Mr Weston’s son Frank also comes to visit – after his mother’s death, Frank was adopted by his wealthy aunt so, despite his relationship to Mr Weston, he is a stranger in Highbury. These young people are to be the pawns in Emma’s matchmaking games, leading to many misunderstandings and much heartache all round before we reach the traditional Austen happy-ever-after.

Any regular reader of the blog will be aware of my ardent devotion to Jane Austen (not to mention my even more ardent devotion to Mr Darcy). So it might come as a surprise to know that I really don’t get along with Emma. Let me try to explain why.

NB There be mega-spoilers ahead…

Apparently before beginning to write Emma, Jane Austen said “I am going to take a heroine whom no one but myself will much like.” And this is the fundamental problem. The delicacy with which Austen normally handles the subtleties of class seems to have deserted her almost entirely in this one – Emma is an arrogant, self-satisfied snob who expects everyone to toady to her, not because of her own talents or character, but simply because she is the daughter of the richest man in town. And none of the other characters are much better.

There’s the annoying Mr Woodhouse, a selfish hypochondriac, whom everyone kowtows to because he is rich. Frank, a selfish pleasure-seeker, whose behaviour to Jane and Emma shows a complete disregard for anyone else’s feelings, but still isn’t as bad as his unconcealed delight at the death of the wealthy aunt who brought him up. Jane, who has to be the most boring character in all of English literature. Harriet, who has fewer braincells than the average amoeba and about as much personality. (Why would Robert love her? It’s inconceivable…)

Then there’s Mr Knightley. He’s thirty-seven. Emma’s twenty-one. He has shown an interest in her since she was a child, so let’s say since he was twenty-four and she was eight or thereabouts. He has brought her up to be what he wants a woman to be, and now he’s going to marry her. I know middle-aged men married young girls back then, but young girls they had been involved in bringing up? Yes, Colonel Brandon and Marianne had a greater age difference, and yes, Mr Jarndyce was way too old for Esther, but at least they both met these girls once they were women. Colonel Brandon and Mr Jarndyce leave me a little uneasy, but Mr Knightley makes me positively queasy. And did, even when I was seventeen. 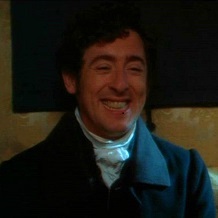 (Mr Elton and Mr Collins…or is it the other way round?)

And that just leaves us with Emma. Fans of the book may wish to look away now, because I’m going to say something you may find shocking – it is my belief that by the time she is fifty, Emma will have transmogrified into Lady Catherine de Bourgh. What is different about them other than that Emma is young and pretty? They both think themselves above the need to learn the skills that other young women have to master in order to secure a good marriage. They both think they have the right to interfere in the lives of the people around them because they consider themselves to be intellectually and socially superior. They both expect the local parson to suck up to them (is Mr Elton really significantly different to Mr Collins?). They both resent anyone who shows any kind of independent spirit or who outshines them at any skill. (Is Jane Fairfax not the closest the book has to my beloved Lizzie? Except Jane is insipid and dull, where Lizzie is strong and witty. And look at Emma’s reaction to her…)

All of this would be fine if Emma developed during the course of the book and learned from her mistakes, but she is still just as egotistical and condescending at the end as she is at the beginning. Thrilled to get rid of the now inconvenient Harriet to the farmer she once despised, but determined to drop her friendship as soon as she does because the connection will be too lowly for Emma’s exalted position. Still expecting Jane to toady to her despite Emma’s appalling behaviour to her throughout. Still as dismissive of Miss Bates as ever she was (one visit after the Box Hill incident can’t be seen as a serious attempt to make amends). If only Austen had made Emma suffer – cast her into poverty or broken her heart. But no, she gets everything she could possibly desire and is left basking in a glory that Austen seems to think is as deserved as I think it undeserved.

The book is as well written as all of Austen’s, and is therefore eminently readable. There is some humour, though not as much as in some of her other books, and her characterisation and depiction of society is as insightful as always – all of which explains my four-star rating. But the fact that in this book Austen openly upholds the strict class and wealth divisions in society makes me wonder what happened to her since she taught Mr Darcy not to look down on other people because of their position in society. Is this the same author who had Lizzie declare “He is a gentleman; I am a gentleman’s daughter; so far we are equal.”? Is Miss Bates then not equal to Emma? Apparently not, and there is the main reason that for me Emma is not equal to Austen’s other books.

Please feel free to tell me why I’m wrong… 😉

57 thoughts on “Emma by Jane Austen”