Another of the biggest names in sci-fi in the second half of the twentieth century, several of Philip K Dick’s books and stories have been used as the basis for blockbuster movies – Blade Runner, Total Recall, etc. The stories in this book are taken from the early part of his writing career, all first published in the various sci-fi magazines in the mid-1950s. I will as usual be reviewing the whole book later, but here’s one I’ve picked pretty much at random for this week’s… 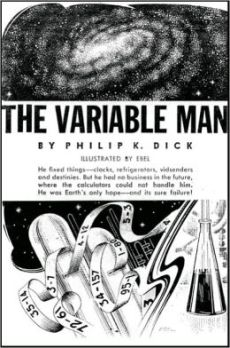 The year is 2136, and Terra (Earth) is at war with the Centauran Empire. As each side continues to make advances in weaponry, the balance stays in favour of the Centaurans, whose territory surrounds Terra in an unbroken ring. As any changes are made, new information is fed into the SRB machines that calculate the odds, but each time they show Centaurus still in front. However things are about to change. Leading scientist Peter Sherikov has found details of a failed experiment to travel at faster than light speeds and reckons he can turn it into a massively destructive bomb. He has the original blueprints – now he just needs someone with the skills to do the intricate wiring. As this information is fed into the SRB machines, the ratio suddenly swings dramatically in favour of Terra. Security Commissioner Reinhart issues orders to start preparing an attack on Centaurus.

Meantime, elsewhere on Terra, scientists are carrying out time-travelling experiments. Ordered by Reinhart to close the experiments down before the beginning of the battle, an accident means that they also bring a man, a general handyman, from the early 20th century. He escapes into the mountains, but not before proving he has unique skills at fixing things. On being told about the existence of this man, the SRB machines close down and no longer show a ratio at all. Reinhart believes the solution is to find him and kill him. But Sherikov still needs someone to fix his bomb…

This is quite a long short story, perhaps novelette length. I’m no scientist, as you know, but I feel the science in this book is a long, long way from being founded on anything realistic. However it sounds pretty good nonetheless and is consistent within the story. The dependence of the future men on computers and technology is contrasted with the man from the past’s ability to work with his hands and his brain, with Dick being clearly in favour of the latter. The two warring sides at a standstill, desperately trying to gain a technological advantage, clearly mirror the real-world cold war and arms race which were just beginning to get seriously under way at the time of writing. There’s a lot – a lot! – of people chasing and shooting and bombing each other with massive destruction all over the place. And that’s just the Terrans! For much of the story the view of how man has developed over the next couple of centuries is pretty bleak, but the ending is much more hopeful – courtesy of the twentieth century visitor, of course.

For the most part this is a very well written story with an imaginative plot. The ending is signalled a bit if the reader is paying attention, but still works. It dips for me a bit when the blowing-things-up stuff goes a bit over the top – blowing up an entire mountain range to kill one man seems excessive even by 1950s standards. But it’s an enjoyable read overall with the right kind of mix that makes for good sci-fi – a strong speculative future used to look sideways at contemporary society. Even as early in his career as this, Philip K Dick is showing the imagination and storytelling skills that enabled him to become one of the greats of the genre.

(Now, as I said, this is quite a long story, but here’s a link to The Eyes Have It, a delightful little Philip K Dick story that won’t take you five minutes to read – funny, quirky and clever. Is it sci-fi? Well, it’s about aliens…sorta…)