Darcy and Lizzie in space!

A dying planet criss-crossed by canals – what an inspiration Mars has been for generations of sci-fi writers to imagine the alien species that must once have lived there…or may still. It’s almost sad that advancements in science have destroyed all hope of finding intelligent life on Mars. However this story dates back to 1911, so Burroughs could allow his imagination to run free, making it an ideal choice for…

A Princess of Mars by Edgar Rice Burroughs 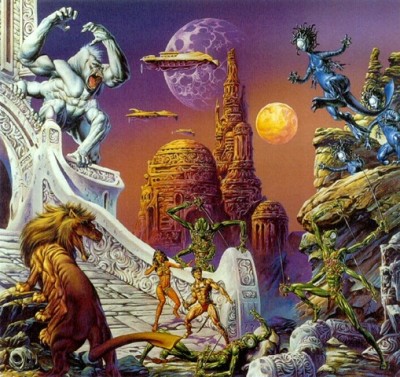 He was a splendid specimen of manhood, standing a good two inches over six feet, broad of shoulder and narrow of hip, with the carriage of the trained fighting man. His features were regular and clear cut, his hair black and closely cropped, while his eyes were of steel gray, reflecting a strong and loyal character, filled with fire and initiative. His manners were perfect, and his courtliness was that of a typical southern gentleman of the highest type.

Swoon! It could so easily be a description of my beloved Darcy, couldn’t it, girls? But no…this is John Carter, heroic here on Earth but superheroic once he is mysteriously transported to Mars, in a way that Burroughs leaves entirely unexplained. Which is a good thing, in one way, but sad in another, because the true comic heights of this book are reached when Burroughs tries to explain scientifically what’s going on.

This ray is separated from the other rays of the sun by means of finely adjusted instruments placed upon the roof of the huge building, three-quarters of which is used for reservoirs in which the ninth ray is stored.

Arriving naked on Mars, Carter finds himself captured by huge six-limbed green Martians, also naked, repulsive to look at and vicious by nature. However, endowed with superior strength and agility by the low gravity on Mars, the brave Carter has soon killed enough of these creatures to win their admiration and to be made a chieftain among them. This comes in handy when his Lizzie turns up (naked), in the guise of a red human-like (hence thankfully only four-limbed) Martian, Dejah Thoris, Princess of Helium. She has been captured by the green Tharks and is soon to be tortured to death for their amusement. But Carter is entranced by the beauty and spirit of Dejah Thoris and, pausing only to sigh over her little hands, fine eyes and precious dimples, sets out to save her and return her to her own (naked) people, the Heliumites. But, just like Darcy, Carter says something really incredibly stupid that offends Dejah Thoris, meaning that he has to do amazing deeds of derring-do to prove his love and win her heart and little hand in marriage, so that one day they can hopefully make an egg together… 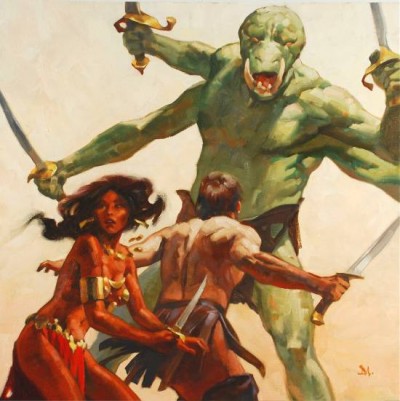 I’m forced to admit it – I loved this book! It’s silly beyond belief and, even making allowances for the fact that it was written in 1911, the ‘science’ aspects are…unique! But it’s hugely imaginative and a great old-fashioned heroic adventure yarn, from the days when men were men and damsels were perpetually in distress. As each new creature is introduced the burning question becomes – how many limbs will this one have? Why stop at six – lets have eight! And what an old romantic Burroughs turns out to be! It’s up to our Carter to teach the Tharks the meaning of love and so show them how they can be tender and caring while ripping their enemies limb from limb…from limb. The passage where Carter wins the undying loyalty of his (ten-limbed) frog-headed ‘hound’ Woola by showing him kindness and affection is genuinely touching, and the romance between Carter and Dejah Thoris could have come straight from the pages of a Mills and Boon novel (Harlequin, for my American friends).

“Dejah Thoris, I do not know how I have angered you. It was furtherest from my desire to hurt or offend you, whom I had hoped to protect and comfort. Have none of me if it is your will, but that you must aid me in effecting your escape, if such a thing be possible, is not my request but my command. When you are safe once more at your father’s court you may do with me as you please, but from now on until that day I am your master, and you must obey and aid me.”

The action never lets up from beginning to end, from one-to-one fights to the death, attacks by killer white apes, all the way up to full-scale wars complete with flying ships and half-crazed (eight-limbed) thoats. And then, just when it looks like Carter and Dejah Thoris might finally be able to hatch their very own chicky-child…disaster strikes…dramatic cliff-hanger ending!! Oh no!! Does this mean…will I have to read the next one…???

I really think I must…

48 thoughts on “Transwarp Tuesday! A Princess of Mars by Edgar Rice Burroughs”