Since horror is really best suited to dark nights and howling winds, Tuesday Terror! has been put on hold for a while. The fretful porpentine is hibernating. So in its place, welcome to…

Many moons ago, I used to read quite a lot of sci-fi, but somewhere along the way I lost interest – so time to see what I’ve been missing. I’ll be sticking mainly to short stories and as with Tuesday Terror! I’ll be aiming to read a mix of classic and current sci-fi writers. I will be delighted if any of you would like to pop a recommendation or two in the comments – short stories rather than books, though, please.

My own interest lies in space stories – either human exploration of other worlds or alien invasions of our own – but no doubt I’ll wander beyond those boundaries from time to time.

And who better to start with than the great John Wyndham?

The Seeds of Time by John Wyndham

Sci-fi as it used to be…

Though always categorised as sci-fi, John Wyndham was probably one of the least science-based writers of the genre. There are very few gadgets in his stories and even when technology is being used – in order to time-travel for example – he doesn’t usually bother to give any kind of made-up science to explain the working; he simply expects his reader to accept it as possible and real. His stories might take the reader towards the fantasy side of sci-fi on occasion, but at heart they’re about humanity and Wyndham’s contemporary society even if they may be set on Mars in some distant future.

This collection, originally published in 1956, brings together ten stories, ranging from comedy to horror, with touches of romance and occasionally social commentary built in. There’s no real common theme – this is a collection where each story is individual rather than being part of a greater whole. But most of the stories are more than strong enough to stand alone and even the weaker ones are well worth reading. Wyndham is a great storyteller and the variety in this book allows him to show off his impressive versatility.

If you can look into the seeds of time, and say which grain will grow and which will not, speak then to me…

Chronoclasm – a story that addresses the paradoxes inherent in time travel and throws in a nice little romantic comedy along the way.

Time to Rest – the tale of a human stranded on Mars after the destruction of Earth, and how his perceptions of the indigenous Martians gradually change as he struggles to accept his situation.

Meteor – a threatened species sends explorers out into space to find a new home, and the planet they find is Earth. Comedy and tragedy all rolled into one – a beautifully imaginative story, this one.

Survival – when a systems failure leaves a spacecraft drifting in space, the passengers and crew must find a way to eke out their food supplies till help arrives. There’s only one woman aboard and she is desperate to find a way to ensure her unborn child survives. Gruesome, horrific and yet kinda fun too…

Opposite Number – now we move into the realm of parallel universes, though Wyndham’s reasoning for their existence is…er…somewhat unique! This is Wyndham at his most romantic, and more than any other I found this story felt very dated. Still enjoyable though. 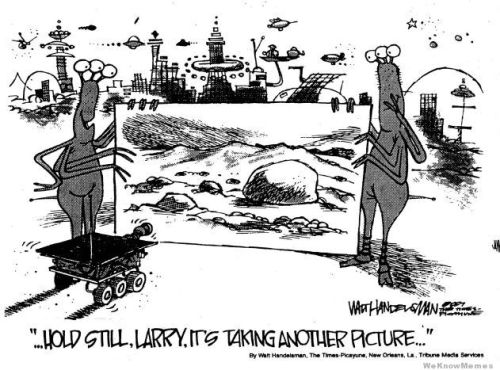 Pillar to Post – time travel again, but this time by body swapping with people from the past. But what if the person you’ve swapped with doesn’t want to swap back? Imaginative and with a lot of humour, but this story also takes a rather grim look at the horrific injuries some soldiers were left with after the Second World War.

Dumb Martian – our nasty narrator buys a Martian woman to take with him on his solitary five-year posting to an uninhabited moon orbiting Jupiter. Fooled by the shape of her face into thinking Lellie is stupid, the narrator is soon to discover he has under-estimated her. This is a thinly disguised attack on racism, but despite the fairly overt message, it’s still a good story.

Compassion Circuit – a future when robots have been designed to take care of all our needs, including health-care. But what happens when the robot decides that it knows what’s best for us – without asking our permission? A theme that has recurred many times in sci-fi over the last half-century, and handled with a lovely touch of horror here.

Wild Flower – a strange little story foreshadowing the whole nature/technology debate that is still going on today. Not the most successful of the stories in terms of entertainment but still interesting.

It’s hard to pick favourites when the overall standard is so high, but I particularly like Meteor, Survival and Pillar to Post. But there’s so much variety in the stories that each reader would probably end up with a completely different top three. Great as an addition for anyone who’s read Wyndham’s major novels, and would be equally great as an introduction to his writing for anyone who hasn’t. Highly recommended.

NB I think the book may be out of print at present, but second-hand copies are readily available.

99 thoughts on “Transwarp Tuesday! The Seeds of Time by John Wyndham”