Violet Minturn is the daughter of an American woman, owner of a high-class courtesan house in Shanghai in the early 20th century. Violet grows up believing she is an American but is shocked to discover that in fact she is half-Chinese, daughter of a man who abandoned her mother when Violet was a baby. As a young teenager, she is separated from her mother and sold into a courtesan house, and the story follows her trials and tribulations through her life into middle-age.

The story is mainly told in the first person and Tan uses a rather formal, precise prose that gives the impression of someone speaking excellent English but as a second language, or perhaps as a translation. This is quite effective in preventing Violet, who despite her parentage has always lived in Shanghai, from sounding too American. At first, Violet considers herself to be American and thus (in the attitude of that time) superior to the Chinese but, once she is left to fend for herself, she has to learn to live as Chinese. The book shows quite clearly how someone of mixed-race was looked down on by both American and Chinese, and Violet’s struggle to be accepted by either group runs through the story.

“It’s one thing to lash a beauty’s arms to the high corner of the bed and quite another to hang her upside down like a monkey from the chandelier. They don’t care if the chandelier crashes down or an arm is twisted loose from its socket. I know of one girl who fell on her head, and afterward she put her clothes on backward and never said two words that made any sense.” 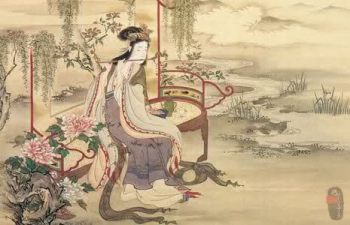 Although Violet’s early story sounds fairly horrific – sold into prostitution – this is lightened by the fact that she grew up in a courtesan house and therefore wasn’t as shocked as a normal Westerner would be. In fact, the chapters where Magic Gourd (her mentor and friend) teaches her about courtesanship have a lot of humour which, although it’s obviously sex-related, rarely becomes too graphic to be comfortable. The book gives a fascinating look at this lifestyle, where the women must be ‘courted’ with gifts, sometimes for weeks, before any rumpy-pumpy can take place. Although the courtesans aren’t considered completely respectable, they aren’t reviled as common prostitutes either – they have their own place in society and the hope of each is to become a wife to one of their patrons which, as Tan relates it, happened fairly frequently.

“The only problem with old men is that they die, sometimes suddenly. You may have one as your patron who gives you a handsome stipend. It’s a sad day when you learn his sons are burning incense for him at the family temple. You can be sure that his wife won’t be toddling over with your stipend in hand.”

Unfortunately after this promising beginning, the book begins to drag. Yet again, at 600 pages, this one could have done with being cut by at least a third. Violet leaves the courtesan house and her life unfolds through a series of love affairs and tragedies. Some parts have the same interest as the first in showing a different lifestyle – for instance, how a Second or Third Wife could be treated in a land where women had very few rights. But other parts are repetitive and long drawn out. Although very well-drawn, Violet is not the most likeable lead character – she is strong, but she is also proud and arrogant and never really loses her sense of superiority over everyone she meets. Magic Gourd, on the other hand, is a great character who provides much of the humour which lightens the book. We don’t get much feel for Shanghai outside the courtesan house, and major events like WW1 and the war with Japan are skipped over lightly without much insight into how this affected life for the Chinese. There are parts of the story that should have been very emotional, but somehow didn’t quite work out that way – perhaps because Violet’s strength of character and lack of vulnerability prevents the reader from truly empathising.

All in all, a patchy read with some very good bits but other parts that were far too long and meandering. The strengths are in the writing and characterisation and these would persuade me to try more of Tan’s work, but I can only recommend this one half-heartedly. 3½ stars for me, so rounded up.

18 thoughts on “The Valley of Amazement by Amy Tan”