A touch of magic…

The best description I can come up with for this collection of fifteen short stories is ‘modern folk tales’. Ranging from more traditional tales of magic and monsters to very modern stories of sex and technology, if there is a common theme, it is of alienation and loneliness. Some of the stories are short and quirky, others longer and better developed. Sometimes humorous, sometimes moving, occasionally creepy, the stories are extremely well written and compellingly readable.

While the quality of the writing never wavers, I found the quality of the stories themselves to be somewhat variable. There were some that I felt hinted at a depth that didn’t in fact exist, and others that seemed rather pointless and occasionally a little gratuitously distasteful. For instance, the first story Appleless is a beautifully written tale glossed over with an air of magic and mysticism, which in the end fails to disguise that it is fundamentally a rather unpleasant description of a rape. There are undertones in it of Eve and the fall from grace, but the story is too short to have developed these well.

However, to offset against the stories that don’t quite work, there are a few that really stand out as very fine examples of the short story form. Here are a couple that I think would make this an enjoyable book for most fiction readers, and an essential read for those with a love of folk, faerie and magical realism…

The title story, The Color Master, is a prequel to Perrault’s Donkeyskin, in which a king wishes to marry his daughter and orders three dresses for her, one the colour of the moon, one the colour of the sun and lastly one the colour of the sky. Bender’s story takes us to the store where the dresses are made. The old Color Master is fading and has picked our narrator to succeed her. We see how the colours are selected and mixed, how the narrator learns to see the hidden colours within and how she gradually learns to put not just colour but emotions into the dresses she makes. It is a beautiful piece of writing, full of imagery and feeling, with a touch of humour, and complete within itself.

“…I did what the Color Master had asked, and went for blue, then black, and I was incredibly slow, but for one moment I felt something as I hovered over the bins of blue. Just a tug of guidance from the white of the dress that led my hand to the middle blue. It felt, for a second, like harmonizing in a choir, the moment when the voice sinks into the chord structure and the sound grows, becomes more layered and full than before. So that was the right choice.” 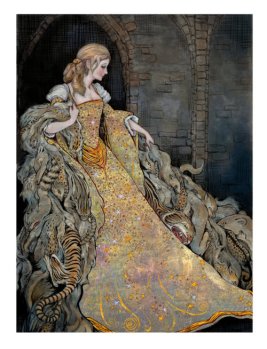 The Devourings is a very traditional seeming tale of a human woman who marries a troll. When the troll accidentally eats their children, the woman must come to terms with her grief and decide whether she can stay with the troll. This is the most traditionally ‘folk’ of all the stories and has the most overt magic in it. Again the writing is wonderful, the fantastical nature of the story never being allowed to overwhelm the love at the heart of it. I found the ending of this tale (which is also the ending of the book) very special, but ‘twould be a major spoiler to describe it.

“As she unlaced her blouse, he touched fingertips to her trembling bare shoulders and explained in his low gravel that he only ate human beings he did not know. I know your name now, he murmured. I know your travels. You’re safe.”

The variability of the stories has made me swither over a rating for this book, but in the end the good stories are so good that they outweigh the weaker ones, and even these weaker ones are so well written that they can’t fail to bring some pleasure. Hence, five stars and highly recommended.

NB This book was provided for review by the publisher.

27 thoughts on “The Color Master by Aimee Bender”